Trinity Church in Menlo Park held its fourth annual “Hearts for Justice” conference on Sunday focused on breaking barriers between Christianity, Judaism, and Islam. The conference was created in 2014 as an event to bring together community members, regardless of faith, and offer educational opportunities about pertinent justice issues that extend beyond the church community.

After the main portion of the conference, there was a resource fair for organizations dedicated to ending religious discrimination. 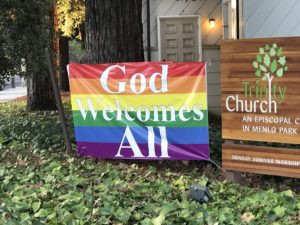 Featured speakers included Reverend Matthew Dutton-Gillet of Trinity Church, Rabbi Sarah Weissman of Congregation Beth Am, and Sheikha Maryam Amir, a Muslim instructor at the Hikmah Institute who has worked with Muslims around the globe and has memorized the Holy Quran. All three come from different faith backgrounds, and all three recognized that the audience was varied and many listeners did not subscribe to any faith tradition at all. In greeting the crowd inside Trinity’s church building, Dutton-Gillett’s first plea was that the audience “look past the Christian symbolism inside the room and make this an interfaith space for the next few hours.”

The title of this year’s Hearts for Justice conference was Towards Understanding: a Jewish, Christian, Muslim conversation. Since 2014, Hearts for Justice has covered topics ranging from human trafficking and violence against women, incarceration and support for local inmates, and addiction and recovery. This year, the theme of finding commonality between different faith groups, as well as agnostics and atheists, was clear in the speeches of all three faith leaders.

Before the program started, each speaker spoke for a few minutes about their faith as a whole, and the common thread throughout their words was the fact that everyone, no matter what they believe in, is really in search of peace and harmony between human beings. Amir pulled verses of peace from the Quran, Dutton-Gillett from the Bible, Weissman from the Torah. Though each book reads differently, sometimes even in different languages, the fact is that the intentions behind each faith are the same. 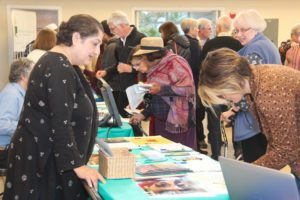 The resource fair after the program promoted peace and justice for all people. Credit: Frances Freyberg.

People of faith and people who do not subscribe to any particular tradition should use their beliefs to come together and work towards understanding, instead of closing their minds to beliefs that seem radically different from their own. Dutton-Gillett agrees that the first step towards understanding each other’s beliefs is to meet people whose ideas challenge your own and offer a new perspective. He added, “ If we can build those relationships, and have constructive conversations with each other, then we can reach a deeper level of mutual understanding.”

Weissman agreed, and said, “The more we can see and get to know real people, the easier it will be to break down barriers of misunderstanding and make real human connections.” 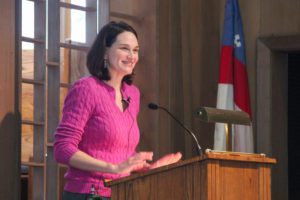 She opened her lecture by saying that in the Bay Area, people of faith, in general, are a religious minority, as they live in a society filled with advanced science and cutting-edge technology. In this way, religious communities are more alike than they are different, and the stereotypes about certain groups are nearly all false. As a Jew, one of Weissman’s core values is a passion for social justice, and one of the main beliefs in Judaism, she said, is “not to oppress the stranger.”

One of the key themes that Weissman shared with the group was the Hebrew “Tikkun Olam,” or “repair of the world.” This Jewish concept actually applies to all major religions, said Weissman, and it is crucial to recognize that the priority of the vast majority of faith groups is to seek equality and love. She added, “our responsibilities are to stand up for other faith communities. Often in this country, the loudest voices of faith are intolerant ones, so we have to be just as loud.”

Now more than ever, voices of acceptance are needed. While many Americans proclaim wishes for religious tolerance, all three Hearts for Justice speakers took issue with the word, and as Dutton-Gillett explained, “to be tolerant of something is to put up with it, but really to wish it wasn’t there. We need to work to move from tolerance to understanding, acceptance, and collaboration.” 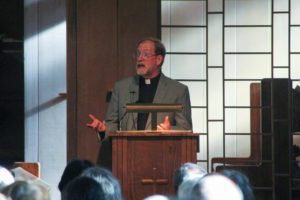 Dutton-Gillett explained the need to move from tolerance to acceptance. Credit: Frances Freyberg.

Amir has felt the very personal need for this understanding in her life as a Muslim woman. After she started wearing hijab, she began to receive stares and even shouts in her direction objecting to her simply because of her religion. People would often come up to her and “welcome” her to the country, though she grew up in California. They would congratulate her on speaking good English, unaware that she was every bit as American as them.

When asked what one stereotype she would remove about her religion if she could, she answered, “Muslim men are some of the gentlest people I’ve met, and this isn’t portrayed in the media. You always see Muslim men screaming, portrayed as violent when this is the furthest thing from the truth.”

She was adamant that she has never met anyone of her faith who has used violence as a tool, and Dutton-Gillett added that violence is never motivated by religion, but faith can become a convenient way to group people and create division. Terrorists who claim religious motivation for violence are often the most ignorant about the actual faith. In her work at the Hikmah institute, Amir works with Muslims of all ages, and has seen even children be discriminated against for being Muslim. “It breaks my heart,” she said, “when I see young children getting called terrorists because of their faith.” 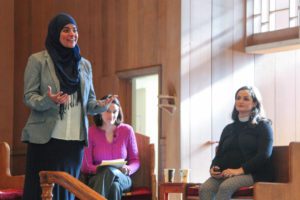 In fact, Islam is a religion that preaches peace and its priority, according to Amir, is to restore rights to marginalized communities. The reality is that Muslims are the most commonly affected by terrorist attacks, according to the United States Department of State. In addition, the United Nations reported that in 2014, Muslims were the most likely to be harmed by ISIS. The Combating Terrorism Center at West Point Military Academy conducted a study in 2009 about terror attacks carried out by Al-Qa’ida and found that Muslims were attacked seven times more than people of any other faith.

These statistics translate into very real fear for Amir and countless other Muslim-Americans, who are afraid when they hear “Islam,” a word that means “being close to God,” being taken and twisted by ugly stereotypes. “It hurts us to hear this word associated with hate when really it’s something so sacred,” added Amir.

Every time she hears about hate crimes, about innocent people being killed, Amir is afraid, for her people and for herself, and realizes that this hatred towards her faith is just one of too many prejudices that force certain minorities into oppression.

Weissman brought up the crucial point that the best way to combat these misperceptions, in many cases, is for religious groups to take political action. Dutton-Gillett added a story from the spring of 2017 when he heard of an anti-Muslim protest taking place in the Bay Area. He, along with members of his congregation, made posters and showed up as a counter-protest. The people spreading peace, he remembered, far outnumbered the protesters. He said, “In our society, far more people don’t want to demonize others, but if these people don’t show up to say no to oppression, those spreading hate will never know.”

This is perhaps the best example of how everyone, across America and throughout the Bay Area, can actively work against religious oppression and stereotypes. Just last January, President Trump placed severe restrictions on travelers from several Muslim-majority countries. At a time when even people with the most power fail to increase the nation’s acceptance of religious minorities, events like the Hearts for Justice conference prove that there are far more people who are willing to fight against oppression than there are to support it. 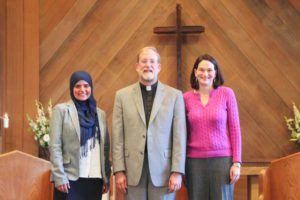 The Hearts of Justice speakers pose after the conference. Credit: Frances Freyberg.

In the words of Dutton-Gillett, “It will take many events, many conversations, and a lot of intentional gatherings of people to make progress in developing a deeper understanding of different religious traditions. But Hearts for Justice has certainly been one step in the right direction.”