Raider Nation is Back at M-A

Who would have believed that the Raiders would be tied for first place in the same division (the AFC West) as the reigning Super Bowl champion Broncos and with a history filled with losing records?

To tell you the truth, the Raiders have almost always been bad. They haven’t won a Super Bowl in over 30 years and they only won 30 percent of their games from 2003 to 2015. They have a combined record of 63-145 during those terrible 13 years.

John Mills, a sophomore at M-A, summed up how bad the Raiders used to be. “If we won one game five years ago, that was a miracle.”

So what has made the 2016 Raiders one of the best teams in the NFL after years and years of suffering? With quarterback Derek Carr from nearby Fresno State, wide receiver Amari Cooper, and running back Latavius Murray, the Raiders are filled with young talent.

The Raiders’ current success is largely due to their young guns, who the Raiders had an opportunity to draft because of their many losing seasons, giving them several top draft choices. Reggie Mackenzie, the general manager of the Raiders, has also played a large part in getting the key players that the Raiders need in order to compete in one of the toughest divisions in the league.

Unlike the Cleveland Browns, who recently have been known notoriously for losing season after losing season, Mackenzie has made all of the right choices with the new acquisitions to the team. Take Michael Crabtree, who was a solid wide receiver for the 49ers years ago. Mackenzie took a chance on this veteran and Crabtree had one of the best seasons of his career last year when people thought that his career was over.

With the help of 2014 first round draft pick Khalil Mack, the Raiders’ draft picks have not been busts like in previous years. This new resurgence of young talent has brought more fans into o a fan base that is known to be one of the toughest and harshest in the league.

“I have been a Raiders fan since day one and Al Davis (owner) has really helped with their success,” said Mills, who is thrilled with his favorite team’s shocking recent string of success. 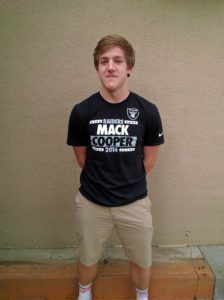 Will Beasley gives his support for Khalil Mack and Amari Cooper to run for president and vice president.

When asked about the difference between being a Raiders fan today compared to five years ago, sophomore Will Beasley, a die-hard Raiders fan, stated, “I don’t think anything has changed. I think it has taken a while and that the team has just improved.”

Without surprise, the Raiders’ success has given them more fans. Interestingly enough, some of these long-time Raider supporters are upset with people they accuse of just jumping on the bandwagon. Mills compared the situation to that of the Warriors, as the Warriors’ star power has brought in fans from around the country. In fact, Beasley thinks that the Raiders are the best in the Bay, at the moment.

Beasley commented, “I think there are probably a few people that are [jumping on the bandwagon] because… they are the best team in the Bay Area right now.” That is saying something. No one would have imagined that the Raiders would be thought of as a better team than the Warriors with players like Kevin Durant and Stephen Curry.

Recently, owner Mark Davis has expressed interest in moving the Raiders from Oakland to Las Vegas. This move could upset the Raider’s vocal fanbase as their home at the Oakland Coliseum, otherwise known as the Black Hole, would be left with just the A’s.

Mills stated, “If they move to Vegas I am not going to like them anymore. So they better stay.” Many would agree with Mills’s view, as the Raiders are known to have the craziest and most beloved fans.

Whatever happens, happens. The Raiders are back at M-A in the form of jerseys, hats, and shirts. People are proud to be Raiders fans. Five years ago, students would be too embarrassed to support the Raiders.

Excluding the 49ers, who are barely holding on to any sort of hope right now, this might be the glory age for Bay Area sports. The Giants have won three titles in 7 years, the Warriors won a championship and are still rising, the Sharks made it to the Stanley Cup Finals a year ago, and the Raiders are shocking the world. Raider nation is back at M-A.