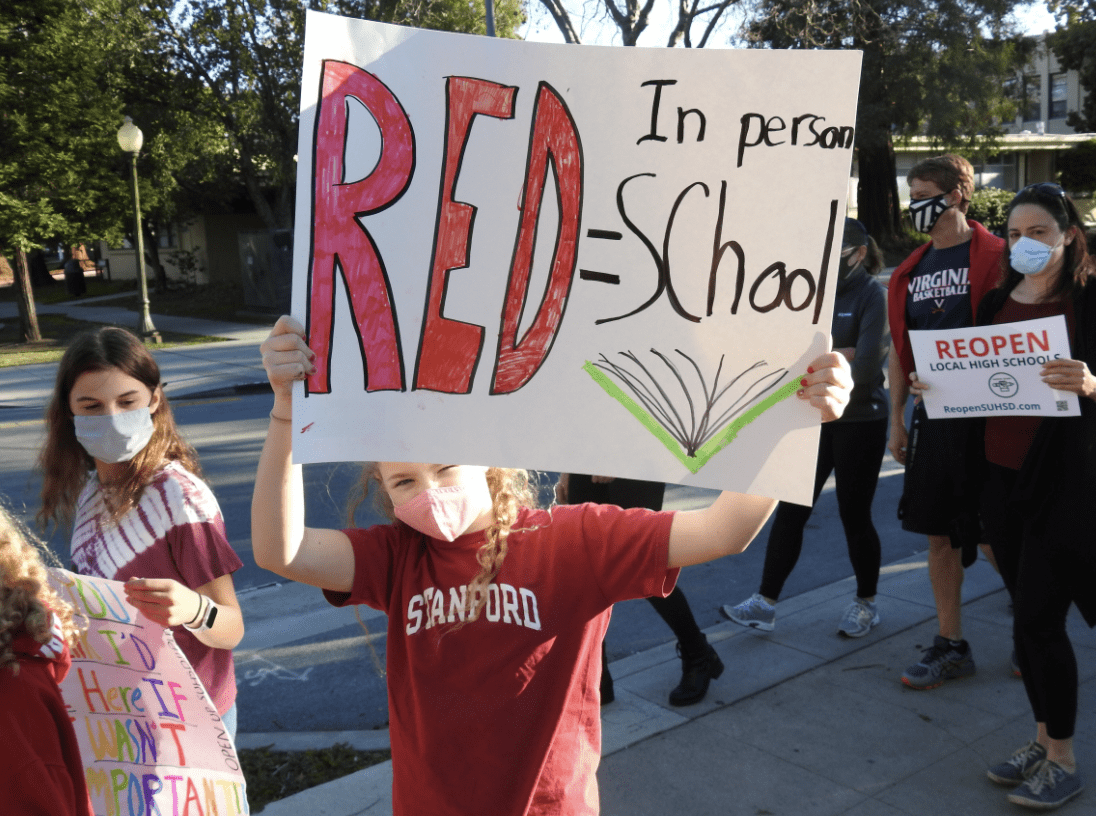 On Tuesday, protesters held a rally, urging the Sequoia Union High School District to return to in-person instruction, now that San Mateo County is classified under the “red tier”. Pleas to return to campus are nothing new to the District, but come amid a series of similar protests nationwide.

The rally began outside of the SUHSD office at 4pm, with loud cheers coming from a crowd of protesters. Some cars honked in agreement in passing, in response to a “Honk For Reopening School” poster carried by one of the protesters. Other signs expressed a variety of different justifications for a return to in-person school, including “Science Says Reopen in Red”, “Bears Need Classrooms”, “Teenagers Have Paid the Price Long Enough”, and “Remote Learning is an Oxymoron.”

Mark Federighi, attending the protest on behalf of his son, a junior at Sequoia High School, says that “this isn’t just important to me, it’s important to all of the kids who don’t necessarily have a voice here today. You have a large portion of kids who aren’t represented because their parents are working, they’re working, or there might be students who have fallen off of the map because they don’t go to school in-person anymore.” Federighi continued, “we’re here as parents, with students and other community members to try to make it known that we need these kids back in school.”

Another protester, simultaneously using the rally as a platform to campaign for Gavin Newsom’s recall, is Mitra Vandertuin. Vandertuin said that her reason to protest “is two-fold. First,” she said, “I strongly believe that the schools should be reopened; the science is there, and these kids are dying at home. They’re not getting an education, they are depressed, they can’t concentrate. I can’t even concentrate on Zoom, myself.” She continued that “I am also here to try to help the recall Gavin Newsom movement. To me they are connected, because he was the one who started the lockdown.”

Senior on M-A’s Varsity Lacrosse team, Ethan Camarao, shared his reasoning for going to the protest, rooted in his eagerness to return to the field, as well as campus. “I found it really cool that so many people came together to support something we care deeply about. It was really hard on us student athletes last year, since we had our season stripped from us because of COVID-19.” Ethan continued, “but seeing all of the love and support today, I have a pretty good feeling that we’ll be back on the field and on campus in no time.”

SUHSD Trustee Alan Sarver shared the efforts the District has made to make in-person transition a possibility. Sarver said, “we published our plan to the county office of education in December, and we are ongoing with the county office of education in refining it for approval. It is essentially ready to go. The vast majority of everything is completely set and ready to go. We are negotiating reopening details with the Teachers Union, and there is a negotiation session going on right now. Both parties went into today’s session with the highest possible desire to come out of today with an agreement.”

Sarver said that while he “can’t guarantee that that will be achieved, it is not the intent to keep negotiating for some unspecified amount of time and keep the schools shuttered. The intent is to use those safe schools as much and as soon as possible, as safely as possible.” Sarver said that he values the opinions of those who attended the protest. He said, “I’m eager for any channel to hear community voices, input, and guidance. This is a strong and effective way to express the science and information behind the perspective, as well as the urgency of getting things going. It [protest] informs our planning, negotiations, and efforts to get staff and students back on campus.”