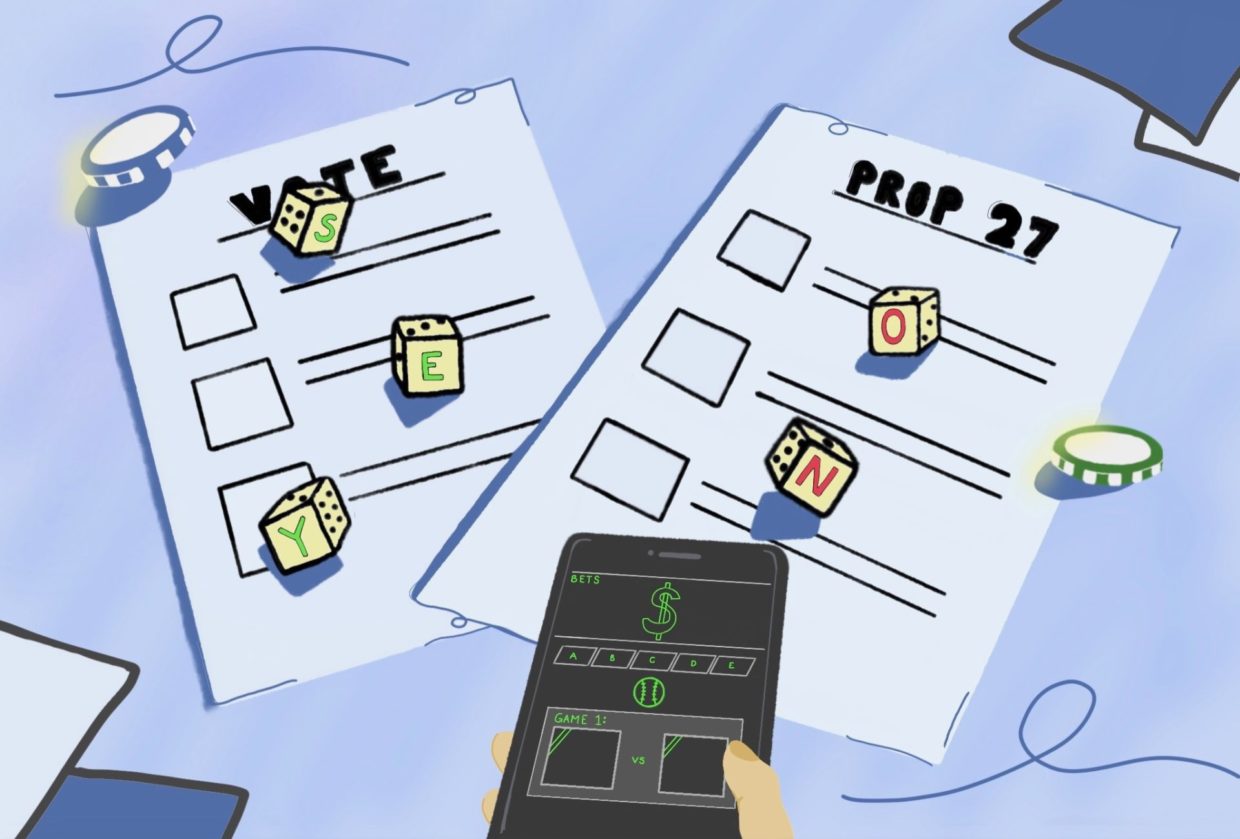 Prop 27: Rolling the Dice on Gambling

If you’ve watched any football this season, you might have noticed the large number of commercials devoted to Proposition 27.

Prop 27, which would legalize online gambling for adults 21 years or older, has seen a surge of money from special interest groups. As of September 20, opponents and proponents together have funneled $369 million toward campaigns for and against the proposition, setting state records for spending. But should we pass it?

California has long been considered the holy grail of online gambling. Three quarters of online gamblers are between the ages of 18-34. California has approximately 88 million people in that age range, over 20 million more than Texas, the next closest state. Large gambling corporations such as DraftKings, Barstool, and MGM back 27. Three smaller Native American Tribes also back Prop 27 because it would provide them money. The MLB is the only major sports league that officially backs the proposition.

Prop 27’s big selling point has been the projected $425 million that will go toward solving the homelessness crisis. The money would come from a 10% tax on all revenue made, and 85% of this tax would fund groups fighting homelessness. However, while $425 million seems like a lot of money, it pales in comparison to the more than $13 billion that has already gone into fighting the crisis. In February, California Governor Gavin Newsom budgeted another $12 million to fight homelessness in the next two years. On top of that, not all of the projected $425 million is going towards homelessness: some of it will go to fighting gambling addictions.

It seems ironic for a company to give money to a problem that is caused by their actions, and would be avoided if those companies couldn’t do business in California.

Gambling is extremely detrimental to health, with studies showing that it alters the brain in a similar way to alcohol and drugs. Once addicted, addicts face anxiety, depression, and an increased risk of becoming addicted to other substances. Studies also show that gambling disproportionately affects lower-income individuals. Online gambling can be worse, according to psychologist Max Abott with online gambling, users feel less guilty gambling than in person, increasing the likelihood that they gamble more often and with more money.

Companies would have to meet certain requirements to provide online gambling, including paying a $100 million entry fee, paying a $5 million renewal every five years, and having operating locations in ten or more states. Last year, the gambling industry, and in particular DraftKings, Fanduel, and MGM, produced $4.3 billion in revenue and according to Custom Market Insights the industry is projected to bring in $145 billion by 2030. Each of these companies bring in over a billion dollars a year, and would easily be able to do business in California. Given how much they stand to gain, California should make these companies pay far more for licensing.

Online gambling in California is inevitable. Big gambling companies will continue to pour money into the state until it’s legalized. As a California citizen, I would want several things in a new bill. First: the 10% tax on all revenue made from online gambling is nothing for these billion-dollar companies. Increase the tax and [thing tax money could be used for]. Second: don’t limit the way the tax is spent. Homelessness is only one of the issues Californians face, and the $425 million that would go to fight the homelessness crisis doesn’t make a dent in the amount already being spent on it. California would benefit far more if this money could go towards other areas of need, such as fighting wildfires, droughts, transitioning to renewable energy, education, and public health. If you allow the money to be spent on anything, Californians will benefit more if it is spent on issues that don’t get as much funding from the state as homelessness. Third: many Native American tribes will lose a vital source of income if gambling is legalized online. A new bill should include a plan to help those communities.

If Californians, instead of large gambling companies, can dictate the laws surrounding online gambling, they will benefit from the money entering the state.