With the National Collegiate Athletic Association (NCAA) 2019 Basketball Tournament starting today, millions of people are predicting who they think will win. However, choosing a perfect March Madness bracket is proven to be one of the hardest tasks known to mankind in terms of probability. Year after year, I think to myself that this will be the year I finally have a perfect bracket, but my dreams of this are usually shattered a couple games in, simply due to the probability.

According to NCAA, “the chances of someone filling out a perfect bracket is 1 in 9,223,372,036,854,775,808. That’s one in more than nine quintillion.” To put this number in perspective, you have a better chance getting bitten by a venomous snake, losing your job, and getting injured in a car crash all in one day than picking a perfect March Madness bracket. The probability is absurd, but if you want the best chance at a perfect bracket, follow these guidelines: 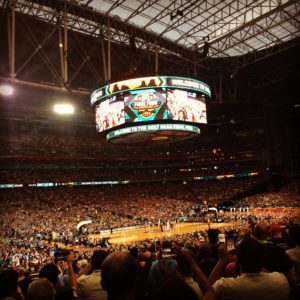 University of North Carolina versus Gonzaga University in the 2017 Championship.

The first, most important aspect is putting in a lot of research into every team in the 64 team pool. This entails browsing ESPN or other sports websites to find valuable information on teams. Baseline research might include teams’ best players, their record, and the conference they play in. If you want to go deeper, research teams that have a low amount of points scored on them in order to identify the teams that have good defenses.

A team with a good defense will win games, thus propelling them further in the tournament. Be sure to also recognize which teams have historically gone far in the tournament. For example, The University of North Carolina (UNC) made the Elite 8 at least six times between 2008 to 2017, winning the National Championship two of those times. Therefore, you should favor UNC while picking your bracket because they have a history of doing well.

There are many people that always choose the upper seed, or higher ranked, teams because it seems natural, but the upper seed teams do not always win the games. In fact, the lower seeds actually win a good number of games, which is what makes March Madness so exciting and unique.

For example, #16 University of Maryland Baltimore County played against #1 University of Virginia last year, and won by 20 points, proving that you should never count any team out. A more common first round upset each year is a 12 seed defeating a five seed. That said, you should not expect low seed teams to go far into the tournament because they usually only make it through two games. There has never been a nine seed or higher in the championship.

Unfortunately, statistics and seeds are not always the answers to a perfect bracket. You also need to have a gut feeling on a team. There is no absolute definition for this category except for having a random feeling that a team will go far in the tournament. The team that you feel will go far is the team that you usually have winning the entire tournament.