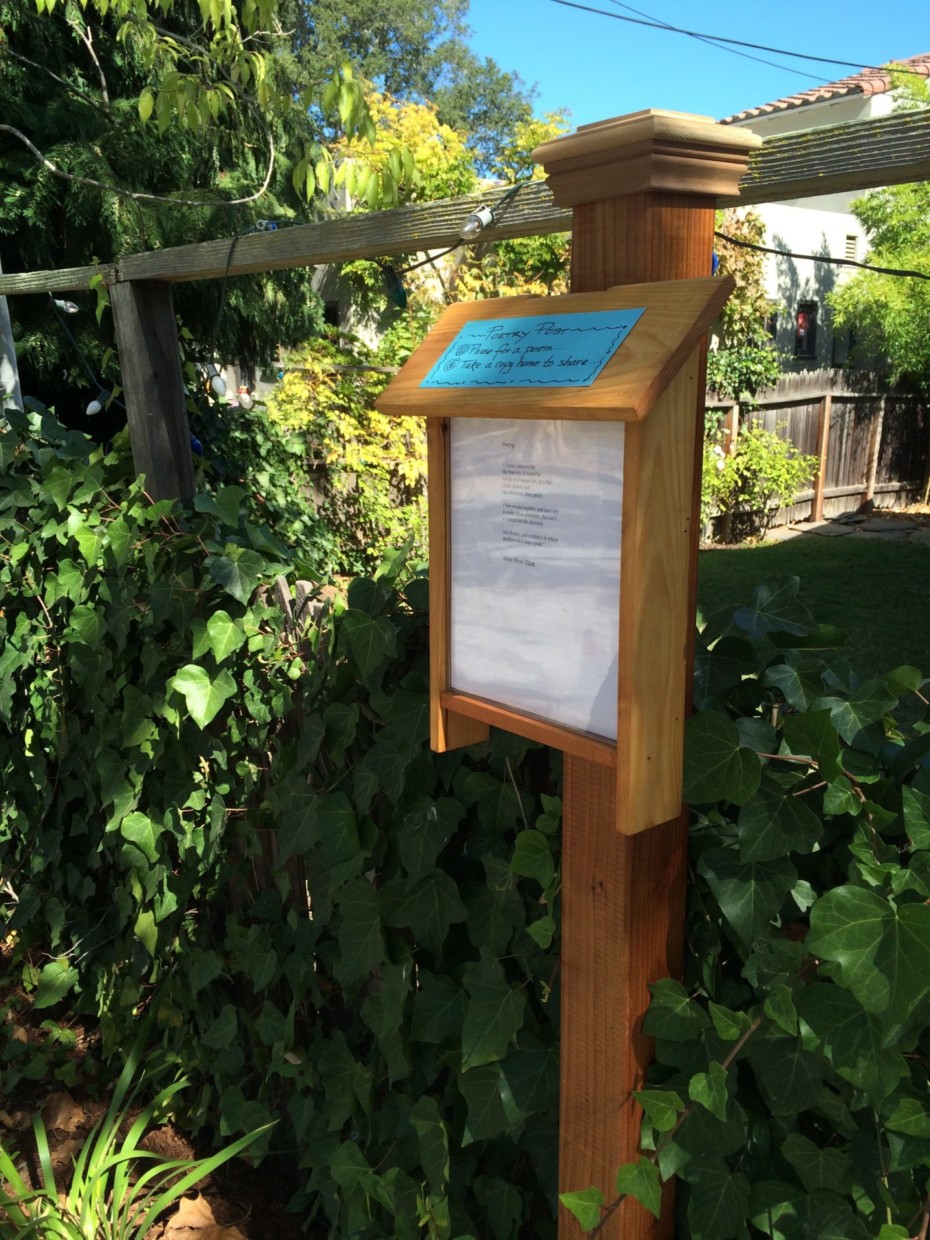 Barbara Allen has lived in Palo Alto for her entire life, currently in a comfortable home on Melville Avenue across from Trinity Lutheran Church, which she attends each Sunday. The sprawling gardens that surround her home are a point of pride; often, Allen can be found out in her garden, pulling weeds or planting flowers and chatting with community members who she has come to know over the years. Part of what has brought Allen even closer to the community that surrounds her is a project that has come to be known as Palo Alto’s “Poetry Post.”

Two years ago, one of Allen’s daughters moved to Portland, “a hip town” as Allen describes it, and she noticed that all throughout the city there were poetry boxes posted on homes, on fences, accessible to anyone walking the sidewalks. A poetry box is simply a wooden box with a folding lid and a clear front that is full of poems for the public to read, take, and enjoy. Allen heard about these posts and was instantly inspired. When describing the project, her face lit up and she remembered thinking, “What an amazing idea, why are we not doing that here?”

The idea lodged itself in Allen’s mind and she realized that her home in Palo Alto could be the perfect place to start a poetry post of her own. She called a friend, a carpenter, and within days had a poetry box mounted to the outside of her garden fence. On August 29, 2014, Allen posted her first poem in the box, “What Gorgeous Thing” by Mary Oliver. Oliver is one of Allen’s favorite poets, a contemporary writer influenced largely by nature and known for clear imagery. The first half of “What Gorgeous Thing” reads

“I do not know what gorgeous thing
the bluebird keeps saying,
his voice easing out of his throat,
beak, body into the pink air
of the early morning. I like it
whatever it is. Sometimes
it seems the only thing in the world
that is without dark thoughts.”

Driving out dark thoughts and making sense of the chaotic world is one of Allen’s goals for the post. She chooses each poem carefully, depending on the season, current events, politics, or simply her mood. She added, “The first thing for me is, is it accessible? I am a big fan of poems that are accessible… I want to know what it means! I want to be sure that anyone who walks by can understand what the poem is saying.”

Every Sunday, Allen tries to place a new poem in the Poetry Post, something that in recent days has often been related to the current political climate. She has a long list of poems that have sparked her interest and are on file waiting to be posted. She also keeps records of every poem that has been posted and has binders full of copies of each one, pages and pages of vibrant metaphors, poignant verses, and sparkling imagery. She explained, “Sometimes it’s nice to just sit back and read through all the past posts.” 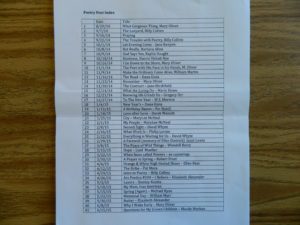 The first page of Allen’s records shows the astounding variety of poems that she shares.

Though her house lies right across the street from Trinity Lutheran Church, which Allen attends regularly, she does not often post-religious poems. At least, not ones that directly reference God or any major religion. Allen is a Christian, but said, “I believe that all the precepts of the major religions are the same. So much of poetry has these religious themes whether referenced directly or not, so I don’t post poems that are religious necessarily, but a lot of them talk about the beauty of nature or metaphors that allude to [a] higher power.”

Allen’s love of poetry has been a constant in her life. As a girl, she had a very close relationship with her aunt, who lived locally and was passionate about poetry. Allen would visit this aunt frequently, and they would read, discuss, and appreciate poems of all kinds. These visits introduced Allen to classical works of poetry. Works by William Wordsworth, Henry Longfellow, Robert Frost, and other masters of metric verse introduced Allen to an art form that she would cherish her whole life. Although the poems introduced by Allen’s aunt were mostly classical, rhyming pieces, Allen has since strayed from these traditional works. 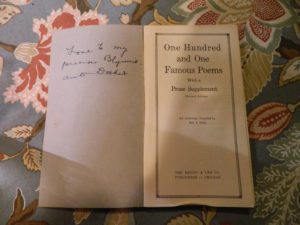 Allen’s aunt inscribed this copy of a book they often read- “To my precious Blynnie,” Allen’s childhood nickname.

Now, she often reads contemporary pieces and free verse poems by the likes of Billy Collins, Mary Oliver, or even her own friends who are published poets. “I don’t pretend to be a poet,” Allen laughed, “but occasionally I will take myself away to a weeklong poetry retreat, and I journal a lot. I have friends who are real, published poets, and they’ll sometimes give me some of their new work to post, or often direct me to beautiful poems they find.”

Allen has a variety of sources that she turns to in order to keep her post updated and full of new, relevant work. She is constantly reading, always finding new artists and searching for work that inspires her and looks at common themes in a fresh way. One of her favorite things about poetry is that there are thousands of poems about the same thing, the same sunrise or moment or object, but each one is absolutely different and contains different feelings and comparisons. She read from “The Trouble with Poetry” by Billy Collins about the meaning of poetry as she described its significance in her own life, and a few lines of the poem read:

“the trouble with poetry is
that it encourages the writing of more poetry,
…
And how will it ever end?
unless the day finally arrives
when we have compared everything in the world
to everything else in the world,
and there is nothing left to do
but quietly close our notebooks”

The poetry post is not a method of communicating political views, but in light of recent events, Allen claims that she cannot help but to display poems that mirror her distinct feelings towards the current government. Though she attends a church with a heavily conservative population, Allen is fiercely liberal and wants to express this through poetry. One of the best things about the poetry post, according to Allen, is that she gets to share poems that are reflective of current events or her own mood and watch the community react to them. Originally, Allen started off by placing ten copies of a poem into the post each week, but now she has increased to fifteen. Every copy is taken by the end of the week without fail, and Allen hopes to be able to increase the number of copies over time. 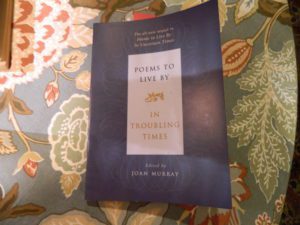 In Allen’s copy of this book, she has marked poems that mirror her frustration with America’s current political situation.

“The Emperor,
his bullies
and henchmen,
terrorize the world
every day
which is why
every day
we need
a little poem
of kindness”

This piece was certainly a message to the new residents of Washington, D.C., but Allen wants to be sure to focus on the positive side of her anger, and reads this poem as a message of hope for people of the United States to unite in kindness over the next four years. 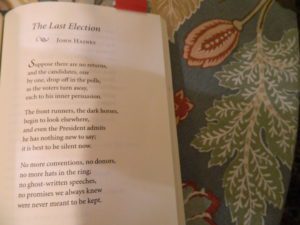 Haines’ poem about the course of elections in the United States is on Allen’s list of poems to be posted.

Allen’s post has culminated a following of regular visitors who check back each week to take the latest poem. Allen has gotten to know a few community members who see her in the garden as they pass by or thank her for such a uniquely inspiring project. One of the best things about the post is that it allows the neighborhood and larger community to bond over each person’s interpretation and reaction to a piece of literature. The poems are provocative and profound, comforting and heartbreaking, modern or classic, and each one is accessible to readers of all ages.

On occasion, Allen finds notes left in the post thanking her or suggesting poems for future posts. One of Allen’s favorite memories of the post is a woman who walked by one day and dropped a note with an email on it into the box. Allen emailed her to thank her, and the woman replied with sheer enthusiasm, asking to come back to the post to show her husband. The very next afternoon, Allen laughed, the couple was sitting in her living room discussing poetry.

Another afternoon, Allen looked out her window to witness a teenage boy standing before the post, staring at the poem within. Allen was startled and pleased to see that a boy, a teenager nonetheless, was moved by the words she posted and unafraid to show his appreciation for the poetry.

These are among countless experiences that Allen has had after starting the poetry post which prove to her the unique ability of the written word to bring people together. Poetry has perhaps the most potency because the words are distilled, the ideas clear and focused and every decision about word choice or grammar so meaningful.

As well as sharing revered works from prominent poets, Allen is open to posting pieces from community members and friends. She added that after reading the posted work, many viewers leave a poem of their own or a reference, and Allen has no qualms about posting these if they speak to her. On mother’s day in 2015, Allen’s next door neighbor, a little boy, wrote a poem of appreciation for his mother and asked Allen to post it. She gladly made copies of “My Mom” and posted the poem, and her heart melted as she watched the boy peering around the fence to see if people were taking his poem. 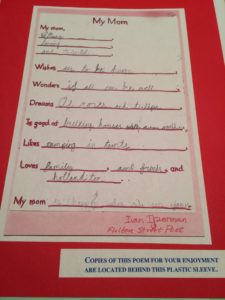 Original copy of “My Mom.”

Throughout every major life event, Allen has turned to poetry to give her guidance and comfort. When her husband died more than ten years ago, Allen was distraught and claimed, “I read a lot, a lot of poetry, which was very helpful. I read a lot of poems about grief and mourning, and writing is also a good way to get everything out of your head, just blah onto the paper.” 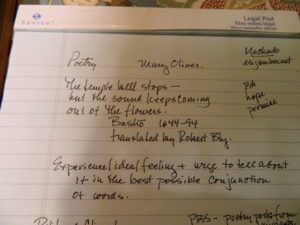 Allen keeps handwritten notes about the amending of poetry.

The above poem by Basho reads

“The temple bell stops-
but the sound keeps coming
out of the flowers.”

This quote immediately resonated with Allen, because “That’s how I feel about poetry. You read it and finish it and put the poem down, but the sound and the message keeps going and playing in your head and stays with you long after.”

In the end, poetry is something that has been intertwined with Allen’s life and emotions since she was a little girl, sitting with her aunt and learning about the world through structured rhyme and flowing metaphors. Her appreciation for poetry has evolved as she has grown and become more politically active and more present in her community. The Palo Alto Poetry Post impacts the community in a subtle yet profound way by sharing joy that is accessible to anyone in need of hope or guidance. Allen’s poems provoke thought, and most importantly, have brought her and her community closer together, which is truly the goal of poetry to begin with. In summary, Allen professed, “I really just want to share truth and beauty with the world.”