In the past year, major tech companies in the Silicon Valley have released their demographic information along with long, banal encomiums on diversity. Companies shared their data with the public and discussed their improvements in hiring many candidates with diverse backgrounds. Despite this ‘progress,’ whites outnumbered the ethnicity gap by more than 50 percent. After viewing the disturbing data, who is at fault for the lack of diversity? Is it the companies themselves and their biased views, or the ethnic minorities and the inadequate encouragement they receive at school when looking to explore the tech field? The blame can be placed on both the tech companies and the skewed education systems that raise these ethnic minorities. 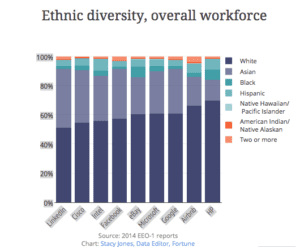 If people had an alternative perspective on what talent meant, I think [minorities] would show up very differently to them.”

Silicon Valley is a symbol of innovation. The technology we see around us illustrates the power these companies have to make something out of nothing. When these companies respond to their diversity problems with “We are simply hiring the best candidate for our job,” it is evident that they are eschewing a far greater problem and not honoring it enough to change it. It is understandable,and highly appreciated, that companies are trying their best to close the gap, but these efforts are not enough to fix the problem. One solution is deep into the application process and the way many companies choose their employees.

Many companies use methods that are biased towards a group of select individuals. For example, many use predominately white board interviews that choose people with a higher education from a selective university; these individuals simply seem more likely to succeed because of their experience. Without the brand or prestige of a highly-selective school with significant funding, many public universities or community colleges cannot directly prepare students for this role, placing them at a disadvantage when entering the workforce. Many of those stuck in such situations are ethnic minorities who did not have the privilege to attend the top universities because of economic reasons they could not control. Many of these individuals had the skills needed to attend prestigious schools, but their economic situation forced them to attend universities many tech companies do not consider when hiring.

I recently spoke with Olatunde Sobomehin, the co-founder of Streetcode Academy. Streetcode Academy is a computer science program in East Palo Alto aimed at bringing positive avenues to minorities through technology as well as identifying and celebrating hidden talents in the field. When asked about the typical job interview process, Olatunde shared, “I believe it is lazy, I believe it is a testament to [companies’] lack of desire to say, “We are simply hiring the best candidates.” There are unorthodox ways for people to show up with excellence. If people had an alternative perspective on what talent meant, I think [minorities] would show up very differently to them.”

This discrepancy between definitions of talent among American tech companies and the realistic nature of the workforce has prevented a plethora of minorities from attaining jobs in the industry. “We are finding that people who go through a different system who would probably not be qualified [for a job] because of their education, are in reality overqualified when they step into the building. Many are outperforming their peers despite the fact they would not excel in a traditional American interview based on their background.” Without the structure of the American school system, many ethnic minorities are not exposed to the strictly defined laws of talent and success necessary to the industry. Thus many are turned away despite the fact that they could in actuality be very qualified.

In order to achieve a more equal level of diversity in the tech workforce, the public education system should increase its promotion of technology to minorities at high schools. Many students within this population in our society do not have the proper influences in their communities to guide them in this direction. Many are raised in a society where technology is not a significant priority. According to Wired, “Among Hispanic students, only 75 percent of students have a computer with Internet access, compared to 98 percent of white students and 85 percent of Black students.” Clearly, lack of resources is one main problem that schools can fix. Schools should fund programs that promote computer science at a higher level. At many, computer science is not offered at all.

Luckily, M-A offers a computer science course within the elective options. Unfortunately, this AP class is not open to all grade levels. Computer Science (CS) should be promoted in programs, such as AVID and Academy, where the students are predominately Latino and African American. Academy encourages technology but does not make CS mandatory. It is nonsensical how being minutes away from some of the most powerful tech companies in the world does not inspire schools to promote CS at its highest.

Brandon Middleton, a native from the Southside of Chicago, and a current employee at Microsoft, stated his opinion on the significance education has on bridging this gap of diversity in Silicon Valley. He said, “Education cannot be understated. The education system is a gap of people of color and the whole country. If you are a person of color who comes from a background where you don’t have resources to afford that, what do you do if your schools are bad, what if you don’t have appropriate housing or economic opportunities to compete at same level with your competitors who are positioned at a higher level?”

It is understandable that the level of diversity one would want seems insatiable, but by taking such steps, the pipeline towards diversity can be established and influence the future of Silicon Valley.