Opinion: Millennials Are the Future

Lately, the media has labeled millennials as “lazy,” “entitled,” and “dependent.” According to The New York Times, “millennials were born between about 1980 and 1995.” Older people often act as if the younger generation is some sort of new terrible phenomenon, forgetting that they themselves were once young. They love to mock young people but do not realize that they were the ones who raised this generation that they disapprove of so much.

The problem lies within the “revolutionary” realization that this is the worst generation to ever exist. This is a common generalization that many people treat as some sort of cultural breakthrough; they’ve finally figured out why young people are so terrible!

Really, people have been saying this about young generations for years. Time Magazine called today’s youth “The Me Me Me Generation.” In 1976, the New York Magazine published a cover story entitled “The ‘Me’ Decade and the Third Great Awakening.” Newsweek, in 1985, called the younger generation “The Video Generation,” implying that young people are narcissistic and must document every moment using technology. The ways older people view young generations are timeless.

Older generations often criticize young people for not working hard enough or not taking their job seriously. In her TED Talk, Kelly Williams Brown pointed out that anyone would say they have better values and work ethics now, than when they were in their 20s, which makes total sense. Of course people would become better workers as they grow older and gain more experience.

The claim that millennials are lazy does not hold up. According to The Wire, “Worker productivity has soared, wages have remained stagnant. We’re all working hard, we’re just not getting paid.” 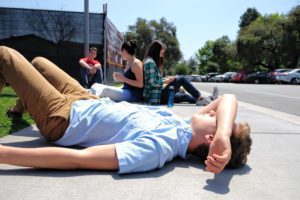 Contemporaries are willing to put in work and invest in a higher education for the sake of increasing their career prospects. In fact, people are attending college more than ever before. According to the National Center for Education Statistics, “Enrollment in degree-granting institutions increased by 15 percent between 1992 and 2002. Between 2002 and 2012, enrollment increased 24 percent, from 16.6 million to 20.6 million.”

The trouble with this increase is that even though more young people are attending college in hopes of pursuing a gratifying career, they face the burden of extreme student loan debt. This challenge forces many to be reliant on their parents for years after college until they have a stable job. Even accounting for inflation, the cost of college tuition has increased over 2.5 times the inflation rate. The amount of college debt a student will have has also increased; “the class of 2014 graduated with an average student loan debt of $33,000.”

It is particularly difficult to enter into the current job market. CNBC reveals, “The unemployment rate among millennials remains stubbornly high at 9.1 percent.” Even with a college education, many millennials find themselves without work and with a large student loan debt.

The fact that there is so much new technology makes for a completely different environment that millennials grow up in, compared to that of their baby boomer counterparts, born between 1946 and 1964. Social media plays a huge part in how people interact now, something that older generations may not relate to or understand. Older people say that technology is ruining the young generation. This claim is problematic because older generations use social media too, and cannot deny that when used properly, it is a great way to share ideas, get inspired, and connect with others. People should not be scared of technological advances, but instead learn to use technology in a smart way.

Maybe millennials are on their phones too much, but this is just how they desire to connect. Every young person wants to connect with his or her peers, just as members of Generation X spent hours on the phone with their friends. Technology is, and always will be, seen as a negative influence on the younger generation by older generations.

Rookie Magazine recently interviewed a group of teenage girls about their relationship with technology, and one explained, “They say it’s garbage, and it consumes everybody, but that’s not what it’s about at all. Just like everything else in life, the internet can be extremely beneficial if you know how to use it that way. It can do beautiful things. It is one of the most useful modern developments, in my opinion, because I’ve seen how it brings people together.”