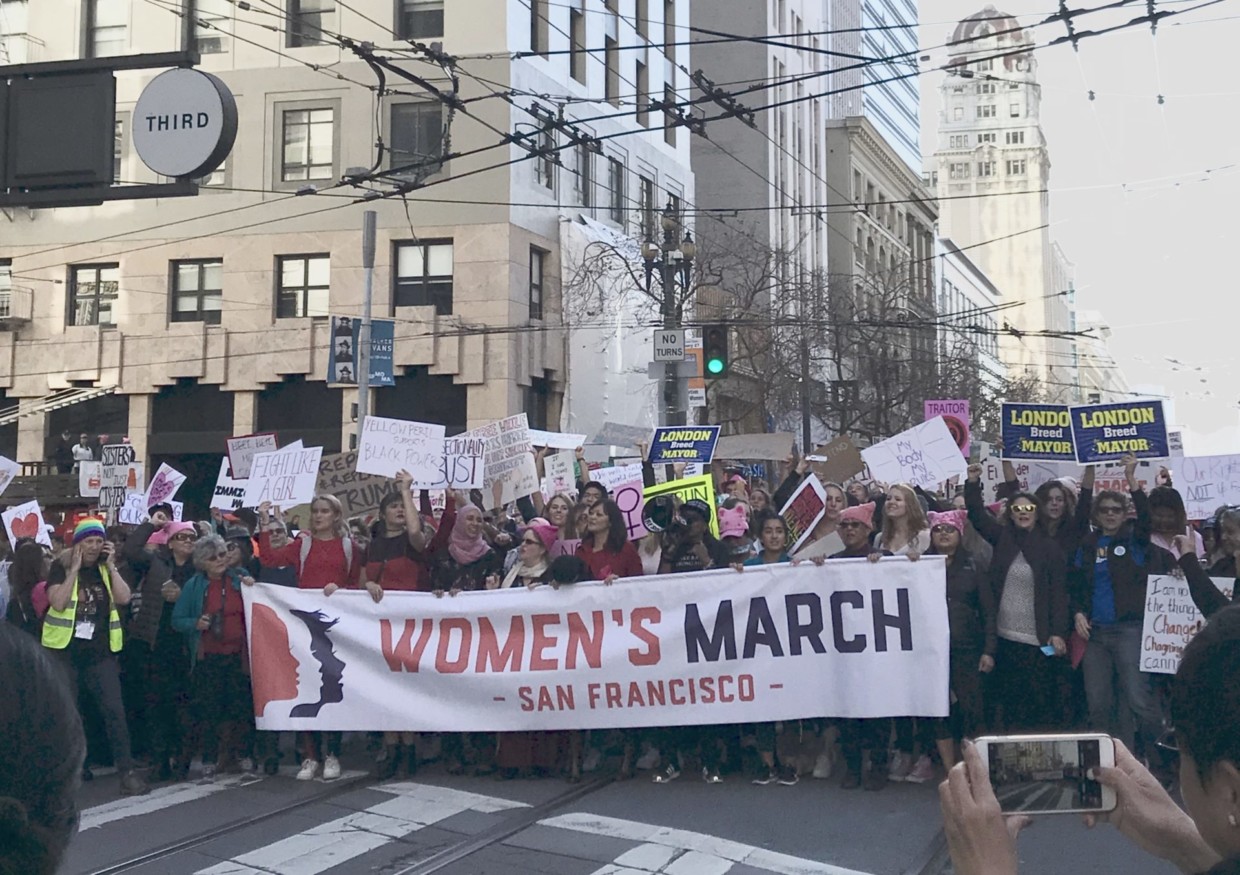 One year later, and still marching

The mood of the march in San Francisco was electric from start to end, and it was clear that the women felt empowered and impassioned to show support for their rights. The overall goal of the 2018 march was to emphasize the upcoming midterm elections and the ways that women should get involved in voting for new leaders in the fall. On Saturday, women’s marches occurred all over the Bay Area as thousands of people gathered to support the powerful role of women in America and to encourage women to vote people in power who they trust to keep women’s rights as a primary order of business.

Last year, millions of men, women and children banded together in the 2017 Women’s March. This year, the Women’s March organization carried out a successful follow-up to their original success and focused the 2018 march on a “Power to the Polls” initiative centered in Las Vegas.

The U.S. generally has a higher male voting percentage than female, but the Women’s March organization hopes to change that. The Power to the Polls gathering in Las Vegas on January 20 was the kickoff to a year-long voter registration tour that Women’s March will carry out throughout 2018. 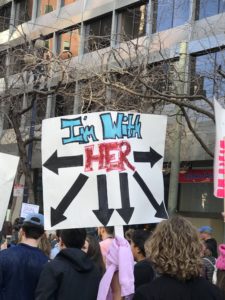 In San Francisco, a young man shows his support for women.

Like in 2017, the march was not only for women but for all allies in the fight for human rights and equality. Though the march in San Francisco and marches across the country were predominantly made up of women, thousands of husbands, brothers, friends, and other men proudly joined the fight.

In San Francisco, there was a rally at city hall before the march began and continued down Market Street from city hall to the Ferry Building Marketplace.

The tour is in preparation for the midterm elections which will likely be held November 6, 2018. All 435 seats in the House of Representatives and 33 of the 100 Senate seats will be voted on. Many at Women’s March want to see more progressive politicians in power who will fight for legislature that supports abortion rights, protection for immigrants, healthcare for all Americans, and other fundamental rights. 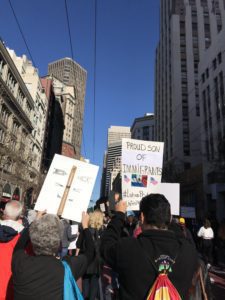 A man joins the march displaying pride for his immigrant background.

After President Trump repealed the Deferred Action for Childhood Arrivals (DACA) bill and recently took away temporary protected status for upwards of 200,000 immigrants from El Salvador, immigrant rights have been a large topic of debate and at the Women’s March in San Francisco, many people marched with signs that proudly displayed their immigrant status and their hope for change.
Several activist groups joined the crowds in San Francisco, including a group from the Lean In movement created by Facebook’s Sheryl Sandberg. Sandberg started the movement with a book by the same name that encouraged women to follow their ambition and take on new challenges in the workplace. The empowering message pushed many supporters to join the march as part of the Lean In community which has spread to over 150 countries. 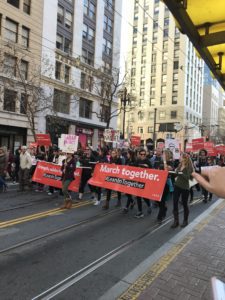 Members of Lean In joined together in San Francisco.

Almost as soon as the day began, President Trump tweeted about the Women’s March and spun it as a movement in support of the work he has done so far to lower female unemployment and supposedly make America a better place for women. The mood of the march, however, was decidedly anti-Trump and his tweet sparked outrage from many women who hope to shift political power away from Trump and his constituents and the Republican Party after the coming elections.

Beautiful weather all over our great country, a perfect day for all Women to March. Get out there now to celebrate the historic milestones and unprecedented economic success and wealth creation that has taken place over the last 12 months. Lowest female unemployment in 18 years!

Another theme of the day was the rights of the LGBTQ community, which people supported by carrying signs that emphasized equality for all genders, not just male and female. Signs like the below, “sisters not just cis-ters” and shirts displaying the intersection of all genders were popular throughout the march, as were rainbow flags and signs such as “Make America gay again.” All of these addressed the need for the inclusion of the LGBTQ community in the fight for human rights. 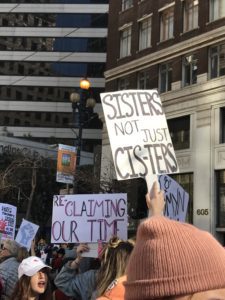 All women, regardless of how they identify themselves, deserve equal rights.

One sign holder summed up the day perfectly with a sign that read “El Poder de la Mujer es Magical” — The Power of the Woman is Magical. The pure energy and hope that radiated from the 2018 Women’s March certainly felt magical, and definitely acted as a first step towards making sure that every person in America is valued and respected as a human being, and protected under the law just as much as anyone else.