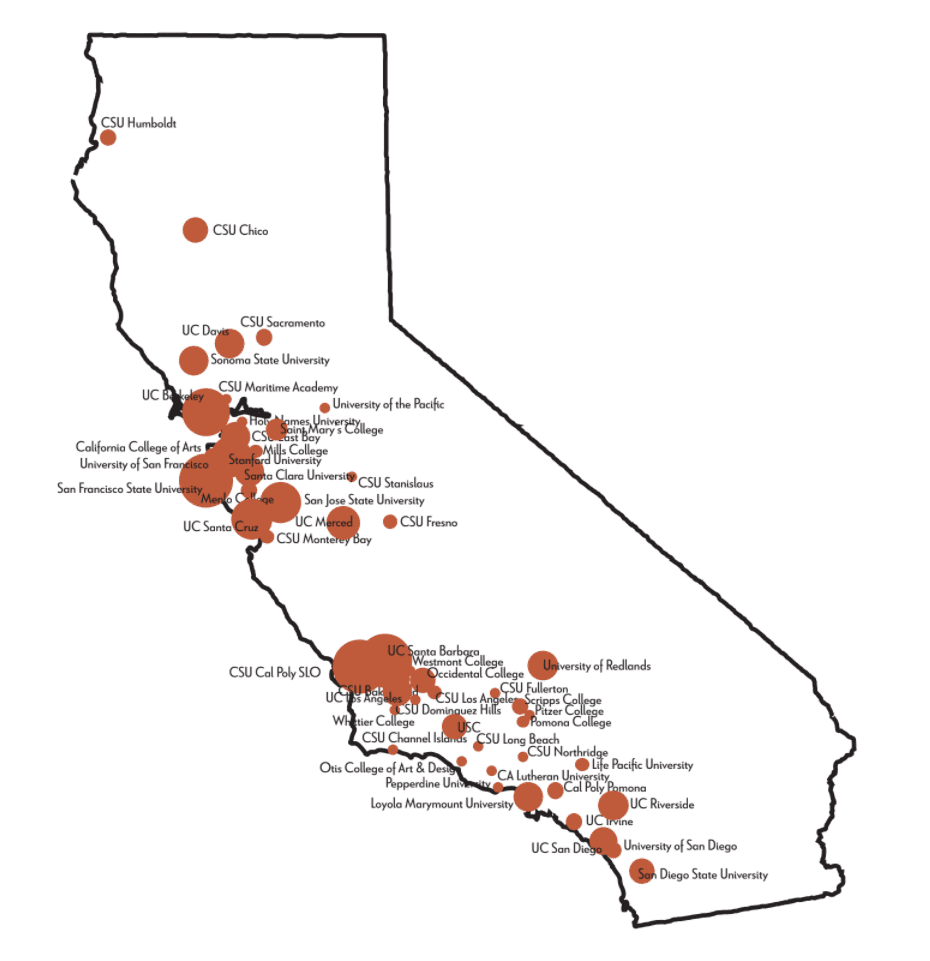 While the United States boasts more than 3,000 four-year universities, most of which extend much further than the state we call home, 52.33% of  M-A graduates bound for a four-year university remained in-state for school from 2017-2020. The second and third place states pale in comparison, with 5.58% of students attending college in Massachusetts, and 4.67% attending school in New York. This ultimately comes down to California’s warm weather, lower price tag, and the convenience of living closer to home.

To explain these numbers, College Counselor Mai Lien Nguyen said, “Nationally, 50% [of] high school students stay within 500 miles of their hometown when choosing a college, so it would not be unusual for our students to choose colleges in California. However, in the last five years, if we were to look at only four-year college-bound M-A graduates, there is an almost 50-50 split between students who remained in California and those who left California. So M-A graduates are slightly higher than the national average for students going out-of-state.”

College Counselor Heather Lowe explained that the reason many attend in-state universities is largely financial. She said, “If a student doesn’t qualify for need-based financial aid, then in-state tuition is the most affordable. For students who can’t afford the high cost of paying for housing and a meal plan, commuting to college saves a ton of money. And lastly, another significant cost is travel—cutting out the cost of flights is another significant way to save on college.”

For instance, UC Berkeley’s yearly tuition is listed at $14,253, while the private New York University’s is posted at $53,308, both excluding room and board. Since these schools have similar levels of prestige, the price tag is often a very influential factor in choosing a four-year university.

UC Davis junior Tori Rarick said, “I stayed in-state because it’s much cheaper, and it makes more sense to save that money for graduate school rather than spend a fortune on the same education out of state.”

UC Santa Cruz freshman Karla Lopez added, “I chose to stay in-state for college because it was better for me financially, especially in terms of transportation to and from college.”

Rarick added, “Being close to home is actually really nice and beneficial, especially right now during the pandemic. College is already expensive and by staying in-state I’ve been able to save money on not only tuition, but plane flights or traveling. I can also drive home any weekend if I need to; which has been really nice.”

Similarly, UC in Santa Barbara freshman Nancy Lopez said, “I can visit my family whenever I want, and the weather is so perfect.”

A consensus amongst in-state students interviewed was that staying in California did not deprive them of the “sense of adventure” that going out-of-state is usually associated with. For example, UCLA freshman Sophia Wendin said, “I’ve loved staying in California because of the weather and the good food. I’m also in a new city and a different part of California than I grew up in, so it still feels like I’m doing my own thing and getting to know a new place.”

Four-year universities in California have also attracted M-A graduates because many of them are prestigious, or cater to students’ individual preferences. UCLA freshman Joanne Yuh added, “I was okay with going to college far away from home, so the school’s location didn’t really matter to me. So when I compared the colleges I got accepted into, I looked at which school would be the best academic and social choice for me and decided to go to UCLA, which happened to be an in-state school.”

This is a common theme among many students in California because the UC and CSU schools have become more selective and have more generous admission rates for incoming freshmen from California. Forbes reports, “UCs remains a top-rated pick for eligible high school graduates both inside and outside of California. California lawmakers are sure to continue putting pressure on state schools like UC and CSU to increase in-state enrollment.”

California Polytechnic State University (Cal Poly SLO) freshman Will Hultgren said, “I was expecting to go out-of-state for university, but I got into Cal Poly!”