This year, students may come across new triads of colorful trash cans around campus. 15 of these are spread equal distances from each other across campus and consist of a bin for recycling, compost, and landfill. Students in M-A’s environmental science class have been pushing for these trash bins for 10 years. AP Environmental Science teacher Lance Powell said, “It was just all student-driven for three to four years, and we were meeting with administration.”

One reason for the change to occur this year was the Organic Waste Methane Emissions Reduction (SB 1383). This law was passed on January 1st, 2022, mandating that all school and business sites in California will compost.

Another reason for the new triads is the condition of the landfill that our school’s trash is dumped into. Powell said, “The landfill M-A brings our trash to is called the Ox Mountain Landfill over in Half Moon Bay. It’s almost full. Anything we can do to divert waste away from there is productive. We wanna keep that landfill open because once it closes, where do we put the next landfill?”

The uncertainty of this landfill made it clear that, as a contributor to its pileup, M-A needed a change. That is where the triads come in, because if we divert trash away from this landfill, it makes a large difference for when this landfill will be completely full.

“If we don’t do this, we’re getting fined.” Powell said.

After this, all that was left was to bring these bins to campus. Brien Oliver, M-A’s head plant manager that overlooks the daily operations and maintenance projects for the District, said this change has been positive.

Oliver reflects, “You know what? It’s actually gotten better. It’s not as bad as you probably think it is. Same goes for compost.”

So far, the triads of cans have been making a productive difference. Powell said, “It’s already where even though mistakes are being made already, we’ve reduced the amount of waste going to the landfill.”

If students do a better job sorting their trash, it helps out the custodians. Oliver says “We separate it and hate it. I don’t like touching people’s trash. Recology requires us to have our trash separated in order to be able to put it in the correct place.” 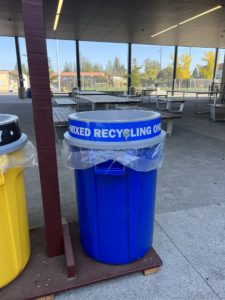 The key to utilizing these trash cans is understanding how to use them. There are some pieces of trash that can bend the rules of what to put where, but there is a baseline for what to put where.

The waste you put in the recycling bin is there to create reusable material. The general categories to put in the blue bin are paper, cardboard, glass, and plastic. Some examples of these could be worksheets, soda cans and glasses, plastic fruit containers, and single-use water bottles. 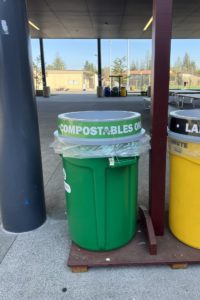 What goes into the compost bin is mainly fruits and vegetable scraps. Some examples include apple peels, apple and peach cores, nuts and grains, bread, and tea bags. There are some other materials that may say they are compostable, but if you are not sure, it is always safer to put them in the landfill or recycle them.

There are some products you should make sure not to put in the compost bin, that may seem like they belong there. It is important to not compost meat scraps, fish bones, dairy products, oils, or insect-infested waste because they attract pests and generally don’t decompose well. 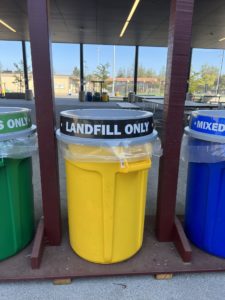 For the landfill bin, it is safe to assume that everything that doesn’t fit into the compost or recycling categories belongs to the landfill.

Even though you can throw anything into the landfill bin, that will cause more trash to be brought to the landfill defeating the purpose of diverting trash away from these places.

If you are ever not sure, you can always look it up!