The team had worked on Connor over summer, and it had a new swerve drive mechanism. Instead of having to steer the whole robot, Connor has eight individual motors that allow drivers to steer it in any direction. Senior and Technical President Tommy Knox said, “It was a very programming-intensive robot.”

Knox explained the team’s decision to put newer members on The Croc’s drivers team: “We felt that the robot itself was so robust that it would be a good chance for younger team members to get practice at competition without having to worry about mechanical failures.” 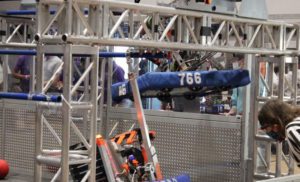 The Croc in action

Team member Will Knox said, “I got more experience managing the drive team. I basically made sure the maps were running smoothly and gave coaching directions to the driver and the box operator who manages the systems on everyone during the matches.” Knox, in charge of The Croc, said the robot was “really reliable in this competition, so it had almost no issues through competition.” With Connor, however, he said the team “learned a lot about how to better manage the swerve drive.”

On the benefits of swerve drive, Programming Lead Alexandre Sauquet said, “The fact that the robot can go in all directions makes the life of the driver a lot easier, and allows for pinning [stopping a robot from going anywhere] more easily.” 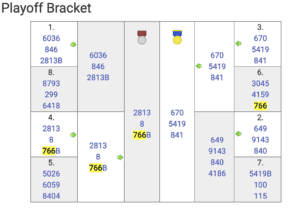 Despite numerous electrical issues in earlier qualification matches, Team 766 prevailed in the competition. The Croc finished qualification matches at 19th place. While Connor had landed at 35th place out of 36 robots, alliance selections—where the top eight teams choose two other teams to work with throughout the playoffs—and a strong strategy led the new robot all the way to second place as part of the fourth place alliance. Each alliance consisted of three teams which worked together to score as many points as possible.

Sauquet said, “We tried to make sure that we’re as consistent as possible and we tried to get every single point possible, even if that means risking the robot’s health. We actually did really well. We got all the way up to finals, even beating the first seeded alliance. Some things that we did surprisingly well was our defense. As a team, we have a very good defense mentality.”

All three interviewed team members agreed that they didn’t have the time or space to test their robots adequately before competition. Tommy Knox said, “At M-A, our drive testing has always been just driving around and testing systems, but during matches you’re slamming these 125-pound robots together and that’s a seriously different environment.” 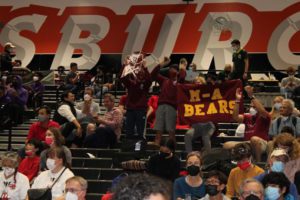 Team 766 cheering on their robots!

On the outcome of CalGames, he said, “Our team hasn’t gone to finals since around 2014, so it was awesome. Our team spirit of this competition was outstanding.”

Thinh Pham, who runs the team’s media, said, “You can see how dedicated the team was. Not only our team, but every single team and the people who provided the space for it.”

Team 766 will compete next on March 23, 2023 at UC Davis. Sauquet said, “One hour in competition teaches us more than ten hours practicing. Every minute that we spend on the field is a minute where we learn something new.”