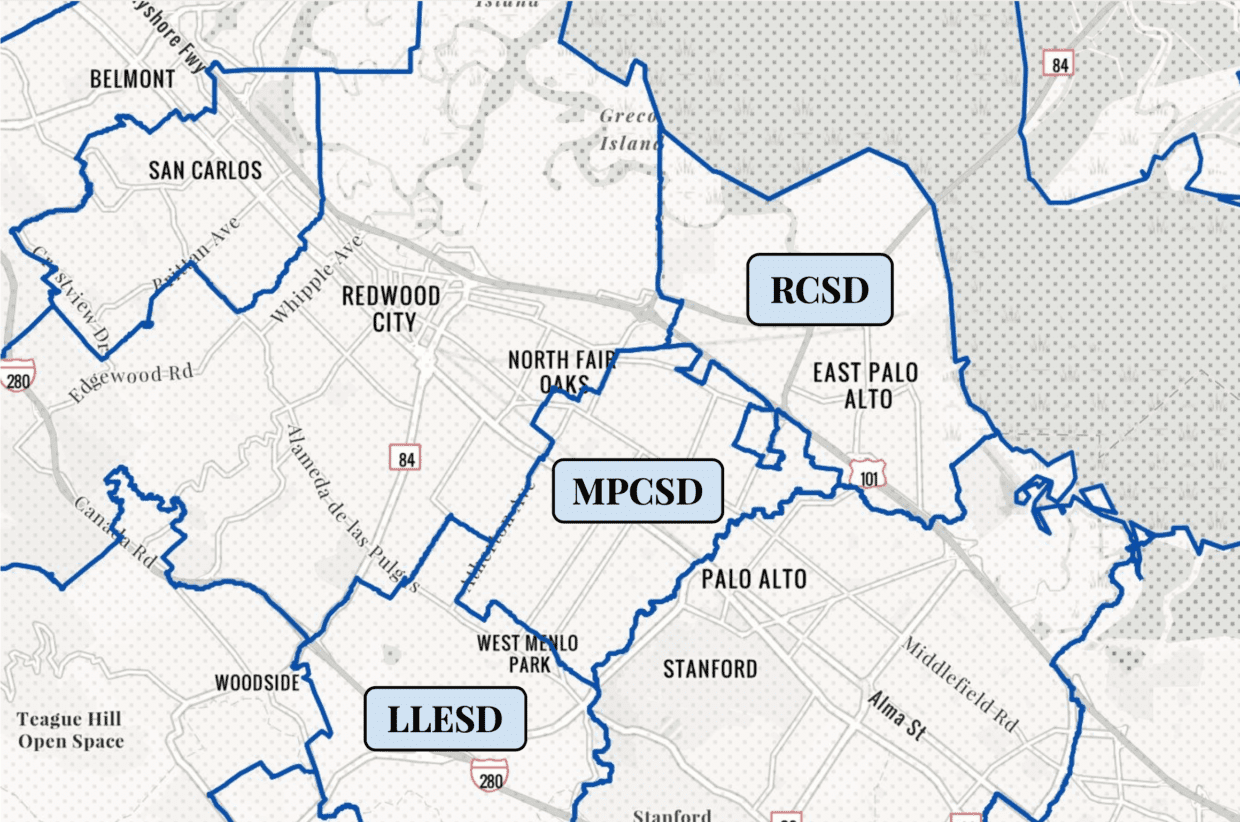 As these schools feed into M-A, it creates a clear segregation along academic, socioeconomic, and racial lines. RCSD kids, 98% of whom are students of color—the majority Hispanic—are tracked into lower class levels. Conversely, honors and AP classes are filled with LLESD/MPCSD kids, who are 72% white or Asian. 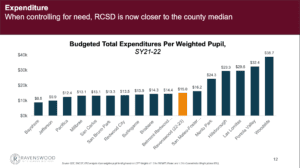 When M-A students consider this academic disparity, some attribute the cause to a resource issue in Ravenswood schools. Yet, RCSD has more resources than ever before. In the 2021-2022 school year, the district received record-high funding due to a number of additional funding sources. These include a COVID stimulus fund, donations from Ravenswood Education Fund (REF), new state grants, and leases of district-owned buildings. Overall, this $29,500 per pupil funding places them in the top 20% for funding compared to neighboring districts, above both Hillview and La Entrada. But it is more nuanced than that: 89% of students at Cesar Chavez Ravenswood Middle School have free or reduced lunch, 43% are homeless or housing insecure, and 47% are English language learners. This means that the average Cesar Chavez student needs significantly more school-based resources than the average La Entrada or Hillview student. In fact, after adjusting for pupil need, Ravenswood has roughly 2/3 the funding per student of MPCSD and just 1/2 the funding of LLESD. 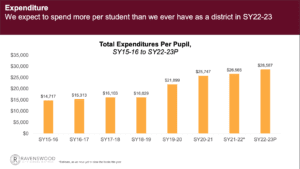 Jenna Pronovost, executive director of the REF, explained, “When I taught in Palo Alto, I learned that if a student had a need, for example, if they needed a little extra help in math or they wanted to learn to play the cello, their families could help address those needs with outside private tutors or classes. That is not the reality at Ravenswood.”

To address this need, the district has increased learning opportunities, like “strengthening the summer school program, extending school days, and hiring more literacy and math intervention teachers,” according to Pronovost. Furthermore, RCSD has the help of Ravenswood Classroom Partners (RCP), a nonprofit that uses one-on-one tutoring to improve literacy in Ravenswood classrooms. RCP’s executive director Angie Holman explained that RCP has “almost 200 volunteers that come into the school every week.” They work mainly with “K-3 students who are six to 18 months behind grade level.” Holman hopes these volunteers can “move the needle” for the students struggling the most in RCSD elementary schools, increasing high school readiness as the years go on.

Ravenswood has also used new funds to increase teacher satisfaction through a new approach to teacher salaries: the Teacher Talent Initiative (TTI). Traditionally, teachers are paid by years of experience and educational level. Now, RCSD teachers will get reviewed, and high-performing teachers will make more money. “This is groundbreaking!” said Holman. Although it is only the first year of this approach, the effects are already apparent: Pronovost said it is the first year “we’re able to start the year fully staffed.” Teachers are eager to work at a school where they can continue to increase their salary through performance. Alex Quezada, principal of Los Robles Ronald McNair Academy (RCSD), confirmed this, writing in an email that they’ve “been able to not only retain our teachers, but also hire new ones! For the first time in four years, we have recently filled two vacant reading intervention positions.” Over the next few years, the TTI will hopefully continue to increase teacher quality and retention rates by providing a significant incentive for teachers to work in RCSD schools. Pronovost said they will continue to “evaluate the impact of this new evaluation system” by working with the John W. Gardner Center at Stanford, which “conducts rigorous research, supports evidence-based practices to improve and strengthen the well-being of youth, and emphasizes equity in youth-serving organizations.”

Moreover, Ravenswood also used their new funding to close the teacher pay gap with other districts, raising pay for teachers by 17.5% in the last four years. Now, new teachers in RCSD start at $60,000 a year, which is close to the $62,800 and $67,450 that LLESD teachers and MPCSD teachers begin at, respectively. While this does not begin to solve the housing issues that teachers from all districts face in the competitive Bay Area housing market, it at least puts RCSD teachers on par with neighboring districts, which RCSD hopes will increase teacher retention rates.

RCSD’s new funds have also improved facilities. In March 2022, RCSD began a 50 million dollar construction project at Cesar Chavez Middle School which will provide a much-needed replacement for their 30-year-old portables. Two months later, RCSD’s school board passed Measure I, approving a further $110 million for facility renovations. Unfortunately, these new funds still don’t cover the amount needed for all updates: in their 2015 facilities master plan, RCSD required over $300 million dollars for facilities updates. Some of that facility work includes “updating all of the classrooms, modernizing them, providing more green space on campus, and things that are really critical around climate change, like adding solar panels,” said Pronovost.

Despite all these improvements—more learning opportunities, better teacher pay, facilities updates—student scores have dropped, not risen, over the last two years. One obvious culprit is COVID-19. RCSD suffered severely in online learning, especially compared to LLESD and MPCSD. Throughout 2020 and 2021, COVID-19 cases in East Palo Alto and East Menlo Park were consistently higher than in West Menlo Park and Atherton, preventing Ravenswood kids from returning to school. In these communities, COVID-19 transmitted more easily due to greater proportions of essential workers and higher-density housing. While La Entrada and Hillview both returned in person in Fall 2020, RCSD schools stayed in distance learning until Spring 2021. Holman explained, “not only did it impact them being at home longer and doing school from home, but they also had more WiFi issues. They had people using multiple devices in the same household. They didn’t have quiet spaces for studying and doing school. Many of the families live in multigenerational households, many of the adults are working in essential worker roles. In lower-income communities, the impact was much greater.” Pronovost agreed. “It’s a very different challenge for Ravenswood kids than kids in Menlo Park or Palo Alto.”

“Given the circumstances, the district did a wonderful job,” said Holman. They “gave laptops, iPads, and wireless hotspots to every single student.” Even further, Ravenswood went above and beyond by addressing family needs. Pronovost says REF “provided gift cards for families [to] purchase groceries and other household items and connected them with agencies for rent relief.”

Now that RCSD has fully returned from COVID-19, administrators and teachers are hopeful that these new funding implementations will drastically improve high school readiness. Now, RCSD kids “are not under-resourced,” said Holman. So what is the next step?

One circulating idea is merging Ravenswood and Menlo Park schools. Yet, when asked if Ravenswood should merge with nearby school districts, Holman was decidedly opposed. “One of the beautiful things about Ravenswood is they are very true to the cultural background of their student population—that is really celebrated in the district. If they merged, Ravenswood might lose some of their unique cultural traditions. I’m a huge proponent of keeping them separate.”

Instead, RCSD’s next step for increasing achievement levels is simple: time. Progress will likely be slow: “It’s a trickle-up effect,” says Holman. Ultimately, only time will tell how effective these measures are in achieving RCSD’s goal of educational equity and solving disparities at M-A.