About a year ago, large scale construction began at M-A in preparation for an increasing number of incoming students. The blacktop and basketball courts near the I-Wing turned into a large construction site, and the B-Wing is currently being renovated to make more room for the expanding guidance department.

In “Phase A” of construction, the biggest addition to M-A will be the new G-Wing, which is presently being built near the I-Wing. According to Administrative Vice Principal Steve Lippi, “The new G-Wing will include 21 classrooms in its multiple stories, and then down below there will be an area for students to congregate.” The goal of the G-Wing specifically will be to provide more classroom space for the ever-expanding M-A population.

History teacher Alan Perry noted that the additional rooms “should give us much more flexibility and give teachers their own rooms.” He expressed enthusiasm for the modern decor. “It would be nice to have some new furniture. It should have all the technology we need for all the class projects we need to do. Based on the plans that I’ve seen and the amount of money they are putting into it, it should be better than the old G-Wing which…was never built to be a permanent solution to M-A’s growth.” According to Lippi, the G-Wing is expected to be completed in January 2017. At that point, the portables by the “swamp,” where the temporary G-Wing resides, will be vacated and removed.

The B-Wing is currently blocked off for renovations in the guidance offices and Career Center.

The guidance offices and Career Center are undergoing renovation to provide new space for the school staff, which has expanded in tandem with a growing school population. Counselors had begun to run out of office and meeting space, and students waiting to speak to them had been forced to wait in increasingly crowded conditions. Radio station KCEA, which previously operated in a room adjacent to the guidance office, has been moved to an off-campus location to make space for the new guidance facilities. The B-Wing is currently blocked off for foot traffic to make room for construction crews. This renovation is projected to be complete by the start of the 2017 school year.

The location of the future STEM building near the tennis courts.

The other major alteration to the campus will be a new building focused on science, although construction has not yet begun. The science building will be erected where tennis court seven and the tennis sheds currently stand. It will offer science maker spaces and classrooms dedicated to science, and provide storage space and facilities for the M-A robotics team.

Despite the benefits that the new buildings will bring, the construction has raised some concerns. According to sophomore Callum Burgess, “The construction really makes it hard to get around campus. I have third period in the I-wing and fourth period in the PAC and even if I leave at the very start of passing period I get there like a minute late.” Other students raised concerns about the lack of blacktop. “With all the construction, not having a blacktop kind of feels bad,” said senior Todd Lehman. “There’s a lot less space now for people to do stuff.”

The new building located behind the library will provide state of the art facilities for M-A’s STEM classes.

Even then, many students are happy to see the new facilities in development. Junior Andrew Yates has a positive outlook towards the ongoing construction. “I think it’s good that they are improving the school. It can’t hurt to make it better.” Regarding the science building, Yates argued that “science is an important thing that the students would be learning in the modern world. It’s really important that the school spends money on science.”

Stay tuned with the M-A Chronicle for more updates on school construction. 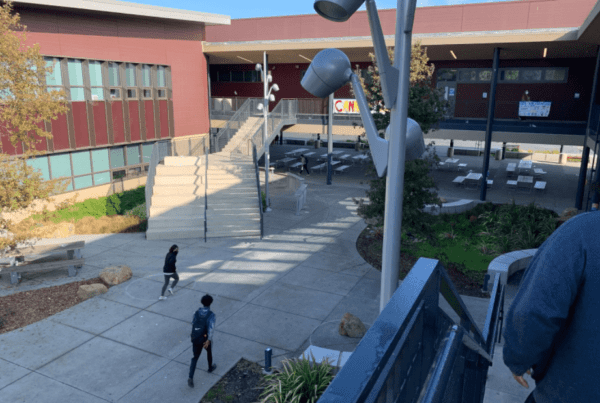