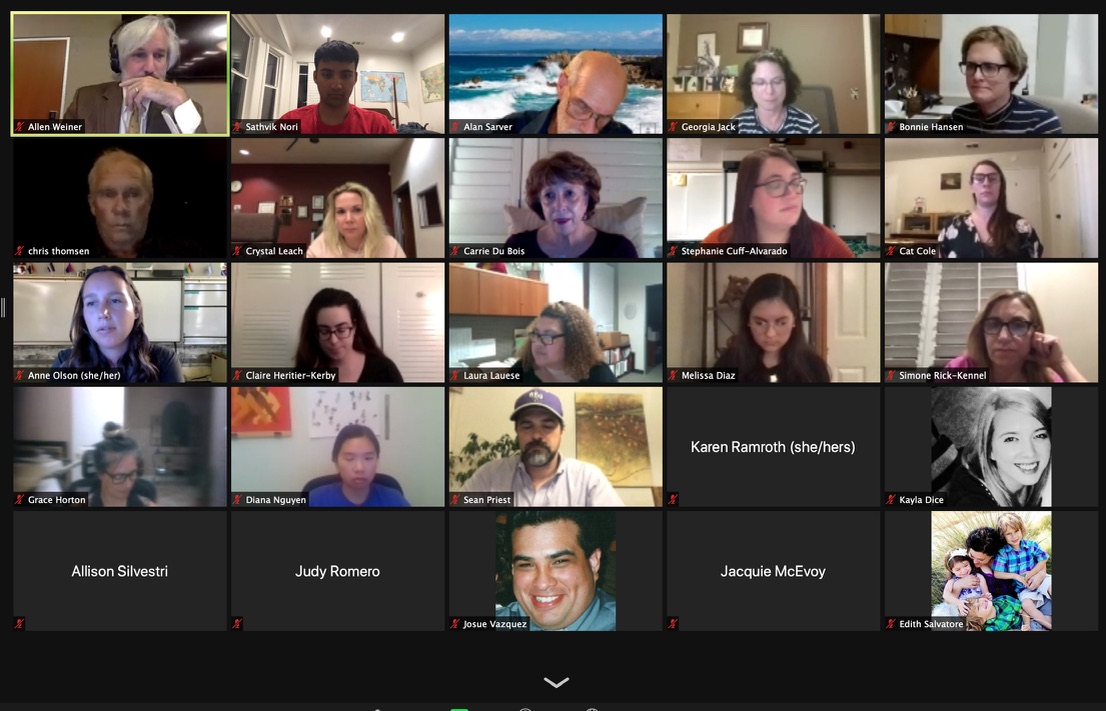 Cover photo: The SUHSD School Board of Trustees meets over Zoom.

In the weeks leading up to Streshly’s resignation, the School Board held closed-session meetings to address the teachers union’s concerns. When asked in late August about the District’s process for examining Streshly’s position, Weiner stated, “the Board has initiated an independent information-gathering process to assist it in carrying out its work.”

The first reason included in the union’s resolution letter was that Streshly “failed to prioritize the protection of health and safety of staff and students” while planning the fall semester. According to the resolution, Streshly ignored the recommendations of the Academic Operations Task Force that the District assembled to inform back-to-school plans. In particular, Streshly ignored recommendations by the Task Force’s Health and Safety working group, as stated by the resolution.

As SDTA President Edith Salvatore explained in August, the teachers union had concerns about the feasibility of hybrid learning since the end of last school year. These concerns intensified in June, when the School Board approved a hybrid fall reopening with a four-stage plan.

The plan did not seem to be logistically feasible. Cary Milia, an M-A teacher and member of the teachers union bargaining committee, stated, “Instructional Vice Principals warned that the hybrid plan [presented to the Board] was not the best plan academically because of the complexities of the master schedule and the fact that students would only see their teachers once per week, and yet the superintendent insisted on presenting it as the recommendation.”

Moreover, the plan raised concerns about the safety and health of students and teachers. In her August interview with the Chronicle Salvatore said, “In June [when the District approved the hybrid model] they hadn’t measured all the classrooms. Since July, [they have been] doing ventilation studies and determining what sorts of filters or fans are needed to get air mixing in classrooms. Our frustration was that the District was making a decision without asking for all the information [about] safety protocols.”

The resolution cited grievances related to Streshly’s communication with teachers. According to the resolution, Streshly announced the beginning of distance learning on March 13 without notifying staff or the teachers union, instead sending a “community email” to parents.

Streshly’s communication with parents and the community was another reason for the call for her removal. “Streshly allowed teacher-bashing throughout public comment at the June 10 Board of Trustees meeting to go unchallenged, turning her back on employees who were being vilified for following the district’s ‘less is more’ directive,” read the letter. Indeed, at the June 10 Board meeting, Superintendent Streshly did not clarify that the District had instructed teachers to follow a ‘less is more’ approach during the Spring semester to minimize the workload for students in quarantine.

At the June 10th meeting, the Board received 942 public comments, mostly from parents denouncing distance learning. One comment read, “The San Mateo County [data] from COVID [in June] are not significant. […] We cannot hold our kids’ mental health and education hostage for what many consider low risk. As parents, we don’t want to move schools just so our children can get an education [….]”

Another stated, “My daughter did not learn nearly to her potential this semester due to poor planning and execution of remote learning, along with the lack of incentive to excel due to the pass fail grading, and I see little hope for significant improvement in the fall.”

Streshly later apologized in a public letter to Salvatore and explained her reason for not speaking up at the meeting. She wrote, “I thought we all understood that parents needed a venue to express how they feel, as ultimately until that point, they had not had the opportunity to do so. Having said that, your letter states that as a result, you felt that I was not supportive of teachers, and for that I want to take this moment to apologize.”

According to the resolution letter, actions and communications by Streshly “left SDTA members feeling disrespected, demeaned, and distrusted.”

The resolution also listed problems ensuing before the pandemic: “Streshly has overseen the period of lowest staff morale in memory,” and “Streshly has consistently turned a blind eye to the issues of racial tensions within our District.”

Regarding the letter’s statement of racial tensions within the District, complaints surfaced in May about how District leadership treated racial issues while planning the return to school. During initial planning, the District convened the Academic Operations Task Force intending to represent community perspectives in the decision-making process.

On May 13th, a letter signed ‘Teachers and Staff of Color, and allies of Sequoia Union High School District’ asserted the lack of diversity present on the Task Force: “Despite the student population in the District amounting to only 35% white students (according to the California Dept. of Education data), the Task Force is over 70% white. Communities of color (from students to teachers, parents, staff) are unfairly underrepresented.”

After the teachers union’s vote of no confidence and resolution, administrators from the five largest high schools in the District released their own public letter stating no confidence in Streshly’s leadership. From M-A, signatories included Principal Simone Rick-Kennel, Administrative Vice Principals Stephen Emmi and Jan-Nicholas Muys, and Instructional Vice Principal Karl Losekoot. Assistant superintendent Bonnie Hansen signed the letter along with other administrators from the District office.

“Dr. Streshly’s inability to make decisions, communicate plans, or articulate a coherent vision has resulted in frustration and exhaustion at all levels of certified management. These ongoing issues are not new, but have been exacerbated by the pandemic crisis such that our ability to meet the needs of students, families, and staff is jeopardized,” said the letter from administrators, addressing the School Board.

“I think, seeing teachers make similar comments, [administrators] felt a responsibility to share that frustration with the Board to make clear that the problems teachers noted were not systemic within the district, but actually stemmed directly from the Superintendent,” Milia said.

After Streshly’s announcement that she would resign, Salvatore told The Almanac, “While SDTA [teachers union] is pleased that Superintendent Streshly’s situation has been resolved, this is a bittersweet victory for SDTA. There is no cause for celebration when someone is unsuccessful in their position and has to leave that position prematurely. We wish Dr. Streshly well in her future endeavors.”

In a press release from the School Board concerning the resignation, Weiner stated, “The Board and Dr. Streshly believe this transition is in their respective best interests as well as the best interest of our educational community.” Weiner added that moving forward from the resignation, “We [the District] want to continue to build on recent successes Dr. Streshly has helped to launch.”