Much Ado About [Not] Nothing: Shakespeare in the Park

Free Shakespeare in the Park is now back in person, celebrating their 40th season with a modern twist on the comedy Much Ado About Nothing. Redwood City performances are over for this year, but if you’re going to San Francisco this weekend or next, head to the Jerry Garcia Amphitheater at 2:00pm for an exciting—and free—performance.

The San Francisco Shakespeare Festival has been performing Shakespeare’s comedy Much Ado About Nothing since July 23rd. The comedy follows Beatrice and Benedick, two sharp-tongued ex-lovers, as well as sweethearts Claudio and Hero.

For those afraid that Shakespeare is too daunting, think again. Audience member Mary Pham is “not really a Shakespeare fan,” but said that modernizing the play makes it “more relatable for the young people—and for me.” 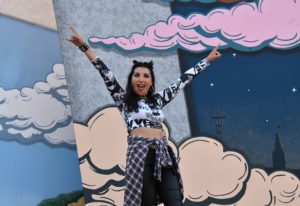 Another audience member, Tim Burks, stated, “They made it feel relevant. The music made it feel more current. And with the costumes, it really felt cool and stylish.” This production of the play takes place in the ‘90s, with changes to costumes and music to match.

Spectator Kevin Neely said, “they kind of shorten it, modernize it a little bit, but they use some of the original language, so that’s cool.” Many audience members felt that this flexibility, rather than taking away from the play, actually really enhanced it.

For instance, in the original, Claudio, Benedick, and San Pedro are soldiers. In San Francisco Shakespeare Festival’s performance, they are still militant, but they are no longer soldiers returning from war. Instead, the characters are protesters, holding signs referencing modern issues, with messages like “End Environmental Racism” and “Hate is a Virus.”

In addition, Don John was a great source of laughter in this rendition. Neely “thought the scene with the electric guitar and the drums was pretty funny.” Hint: it has something to do with Borachio’s line, “Why are you thus out of measure [immeasurably] sad?” (Note: in Shakespeare’s original play, this line is delivered by Conrade, who does not exist in this version.)

Veda Baldota, who plays Hero, noted that “Shakespeare was kind of petrifying for me, in a way that then changing the time period made it a little easier for me to get into my character and just to take on the play and dabble with the language.”

“It’s a play about love and choices,” said David Everett Moore, the actor who plays Benedick. “What do you do in stressful situations in love? Benedick chooses to believe Beatrice and challenge his best friend. Claudio, on the other hand, hears a rumor about his love and just chooses to believe it without asking her or talking to her at all.” 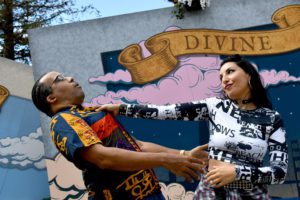 Beatrice and Benedick’s jabs were delivered with due acerbity. Photographer: Jay Yamada

Baldota said, “The stories that Shakespeare tells are timeless. For example, Romeo and Juliet: the fight between two families, and that they cannot love each other. I’m from India. To date, there are families that say ‘Oh, you can’t marry this person,’ because they are of a different religion or caste. For example, even in India right now, some people believe that if you’re Hindu you cannot marry a Muslim.”

She continued, “Hero’s a seventeen-year-old girl trying to figure out where she stands and trying to explore love—which I was when I was seventeen. Even in relationships, like Hero’s relationship with her dad: he believes everybody in this world except her—and it still happens.”

Neely has “really been waiting for it to be in-person again,” and Pham agreed, saying, “I like being able to be in a park and be out in the open.” Baldota said, “acting is an experience where you need each other, you need people.” After two years without in-person performances, Much Ado About Nothing was a successful return to the stage.