Moonlight over La La Land: A recap of a political Oscars

The stunning reversal of the best picture award at Sunday night’s Oscars was itself a microcosm of the shift from last year’s #OscarsSoWhite to this year’s diverse ceremony. Final images of the night showed a nearly all-white ensemble from an old school Hollywood production being replaced on the stage by the first ever victorious all-black cast. In another break from last year’s show, this year’s production consisted of a steady barrage of political commentary — challenging President Trump’s travel ban and his proposals to build a wall and privatize education.

President of the Academy of Arts and Sciences Cheryl Boone Isaacs summed up the night excellently: “Tonight is proof that art has no borders. Art has no single language, and art does not belong to a single faith.”

In fact, political statements began even before the first celebrities stepped onto the Red Carpet. All five directors nominated for Best Foreign Language Film published an open letter challenging increasing xenophobia. The nominees Martin Zandvliet (Denmark), Hannes Holm (Sweden), Asghar Farhadi (Iran), Martin Butler (Australia), and Maren Ade (Germany) expressed their “unanimous and emphatic disapproval of the climate of fanaticism and nationalism we see today in the U.S. and in so many other countries, in parts of the population and, most unfortunately of all, among leading politicians…. Human rights are not something you have to apply for. They simply exist — for everybody.” 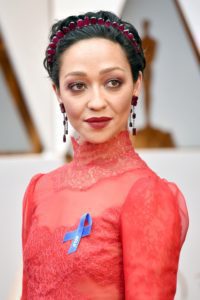 Photo courtesy of Getty Images.
Ruth Negga, nominee for best actress for her role in Loving, sports an ACLU ribbon on the red carpet

Support for human rights was also on display in the form of blue ribbons distributed by the American Civil Liberties Union (ACLU). A statement published by the organization explained the ribbon was a symbol acknowledging the work of the courts, legislatures and people “working to ensure that our precious freedoms and values are preserved.”

Though he was not donning a blue ribbon, host Jimmy Kimmel laced his remarks with political commentary and of course, biting humor. Thus, he began by insisting that Hollywood is very welcoming to outsiders: “We don’t discriminate against people based on what countries they come from. We discriminate against them based on their age and weight.”

More direct jabs at Trump and his cabinet were scattered throughout the night — as when Kimmel urged reporters from the New York Times, L.A. Times, and even then Medieval Times to leave the building: “We have no tolerance for fake news.”

He later took a shot at Ben Carson, saying, “It has been an amazing year for comic book movies — Doctor Strange was nominated for outstanding visual effects, and was also named Secretary of Housing and Urban Development.”

The political targets were not just punch lines; much of the commentary was far more direct. Alessandro Bertolazzi, who won for his makeup and hairstyling in “Suicide Squad”, dedicated his award to all immigrants. Ezra Edelman, who won for “OJ: Made in America”, recognized both OJ Simpson’s victims and the victims of police brutality and racially-motivated violence in his speech. Presenter Gael Garcia Bernal stood up against the wall, stating, “As a Mexican, as a Latin American, as a migrant worker, as a human being, I am against any form of a wall that wants to separate us.”

One of the most powerful statements of the night was that of Asghar Farhadi. Winner of Best Foreign Language Film for “The Salesman,” and 2011’s “A Separation,” Farhadi refused to attend in an act of solidarity with fellow Iranians and citizens of six other nations who have been temporarily banned from entering the U.S. Farhadi chose Anousheh Ansari, the first Iranian and first Muslim woman to enter space, to read his statement. “I’m sorry I’m not with you tonight. My absence is out of respect for the people of my country and those of other six nations who have been disrespected by the inhumane law that bans entry of immigrants to the U.S. Dividing the world into the ‘us’ and ‘our enemies’ categories creates fear, a deceitful justification for aggression and war. These wars prevent democracy and human rights in countries which have themselves been victims of aggression.”

He then urged filmmakers to “capture shared human qualities and break stereotypes of various nationalities and religions,” and “create empathy between us and others… which we need today more than ever.” 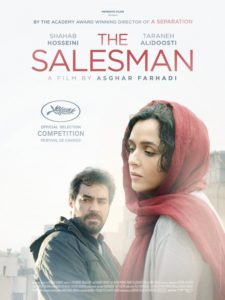 Khaled Khateeb, the Syrian cinematographer of the Best Documentary Short “The White Helmets” was forbidden from entering the United States to attend the Academy Awards despite having been granted a visa. Raed Saleh, the head of the rescue group that has saved 82,000 Syrian lives was also unable to make it to the ceremony. In a speech read by director Orlando Von Einsiedel, Saleh quoted a verse from the Quran: “To save one life is to save all of humanity.”

Einsiedel addressed the crowd, urging them to stand if they wanted the conflict to end as soon as possible. Hundreds responded, rising in unison.

The night ended with a final contrast in the political statements between the two best picture winners. “La La Land”’s producer Marc Platt delivered a somewhat tame view: “Repression is the enemy of civilization, so keep dreaming because the dreams we dream today will provide the love, compassion, and the humanity that will narrate the stories of our lives tomorrow.”

When Barry Jenkins was given the microphone after being wrongfully denied his award, he was a little more direct. Said Jenkins,“The Academy has your back. The ACLU has your back.”

In a night that will certainly go down in history of the Academy Awards for its shocking finale, it was compassion and celebration of diversity that stole the show. Let’s just hope these stars perpetuate Sunday night’s mood and practice what they preach.