Misinformation spreads as M-A is locked down

Editor’s Note: Check this article for updates in the next 24 hours as we gain more information. 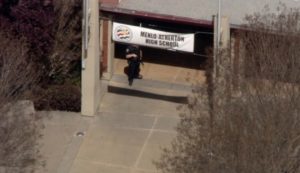 An Atherton policeman securing the front of the school. Credit: Ryan Moran / FOXTV.

A photo posted on Facebook of a former M-A student holding a gun in a bathroom with maroon tile that looked like it was at M-A sparked panic. The student posted the picture shortly before the lockdown, but it has since become clear that the student was not on campus at any point during the lockdown, and that the picture was taken weeks ago in a Redwood City restaurant bathroom, not on M-A campus.

#BREAKING School in lockdown, Atherton police confirmed no current threat to students. Lockdown in response to a photo posted by an M-A student on social media in possession of a firearm.

Rumors quickly began making their way through campus via social media and messages between students, parents, and staff. A picture of a student suspect, sent to staff members asking if he had been seen in classrooms, quickly circulated among students. 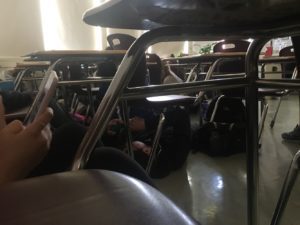 Students huddled under desks and communicated with parents and other students during the lockdown. Credit: Sarah Orttung / M-A Chronicle.

Soon after, students identified the student and found a Facebook post featuring him holding a gun. The post included the caption “La vida es un riesgo y hay que tomarlo,” which translates to “Life is a risk and you have to take it.”

Some parents informed students that the lockdown was in response to a threat in the district. Another rumor quickly circulated that a man had committed a crime in Atherton and subsequently walked onto M-A campus with a gun.

After the lockdown was lifted, an announcement of the public address system said, “There is no threat on the campus. We will go into a 20-minute lunch until 2:05 p.m. when we will ring a bell for fifth period. Again, the lockdown is over.” 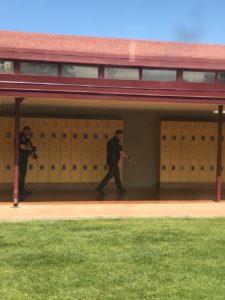 “I was really impressed with how quickly and efficiently our class mobilized. Our teacher immediately went over and locked the door, turned off the lights. People got the shades down and barricaded the door and went under their desks, and I think that, while we were all really scared, the class worked together really fast and got quiet quickly and got under the tables,” said M-A senior Emily Young.

Junior Julia Thyfault said, “I’m more relieved now, but I just hate how this can happen, and it was really freaky the first ten minutes of this because no one was saying anything and I think that just causes more fear amongst students.”

A second announcement said that students could either stay at school or go home if they were signed out by a parent at the front office. Chael Banks, the father of M-A student Molly Banks, said, “We got emails from the school, automated messages from the school. The information flowing from the school was fantastic.”

When asked for any other thoughts, he replied, “No, it’s just sad.”

Correction: This article originally stated that at 1:30 p.m., M-A Athletic Director Paul Snow sent an email stating that all M-A sports have been canceled for the day, but the M-A track meet will still take place as scheduled. Snow did not send this email, but emailed coaches of spring sports stating that the Athletic Directors had received no directions to cancel any games or practices. Co-Athletic Director Steve Kryger sent another email soon after instructing coaches to decide whether or not to hold practices and games depending on how their teams felt. Additionally, Thyfault was stated as a sophomore when she is actually a junior.