Coming off a 35-30 win at Terra Nova, the Bears have two games left on the season, both league games, finishing off with senior night against undefeated Aragon. The Bears now have a slim chance at winning Peninsula Athletic League (PAL) due to Half Moon Bay and Aragon both still undefeated in league. M-A would need both Half Moon Bay and Aragon to lose a game and to beat Aragon to force a three-team tie for the PAL. Regardless of PAL finish, the Bears should still be able to qualify for Central Coast Section (CCS) playoffs and continue their offseason there. 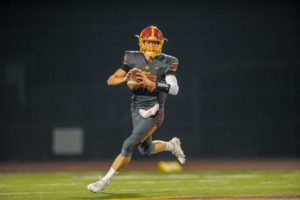 Spencer Corona is the Bears’ leading receiver in both touchdowns and receiving yards, currently ranked second in total receiving yards for PAL, 20 yards behind the leader. Team captains Corona and quarterback Miles Conrad have demonstrated their senior chemistry all season with Conrad totaling 11 passing touchdowns on the year. Freshman Troy Franklin has also been a standout on the offensive side of the ball. The Bears are averaging 27 points per game. 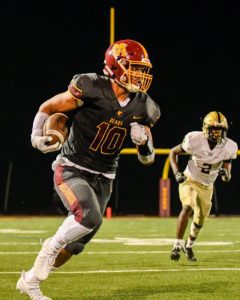 Leaaetoa charges down the field.

On the defensive side of the ball, the Bears have allowed 25 points per game with junior standout Daniel Heimuli leading the team in tackles with 58. The Bears defense is loaded with future college talent led by senior linebacker Kilifi Leaaetoa who has 50 total tackles on the season. Senior cornerback Garry Carter leads the Bears in interceptions with two on the season. The Bears’ star-studded defense will need to be at its best closing out the season and going into playoffs.

With the regular season coming to an end the Bears look to finish strong, going into games against Woodside and currently undefeated Aragon.