When asked about why he loves to play for M-A, boys varsity soccer team captain and three-year varsity player Micah Shalowitz explained, “The pride you have for your school and playing for your school. It gives me more adrenaline than playing for a club team.” After his many contributions and much experience on the team, Shalowitz earned the captain designation this year; however his journey to become a captain started long before his days at M-A.

Shalowitz played a lot of different sports when he was younger, but decided at an early age that he wanted soccer to be his main focus. Right when he started playing, he knew that he loved defense. 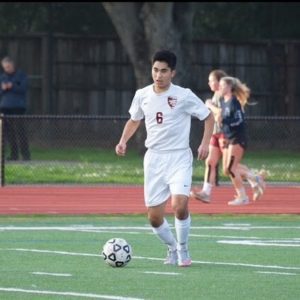 Shalowitz looks to pass from his center-back position.

He also gives his parents credit for giving him the inspiration to never give up. “My parents have been very supportive and it is them that keeps me going.”

At M-A, Shalowitz has endured some crazy seasons and moments.

When he was a sophomore, the M-A soccer team was ranked number 1 in the Central Coast Section (CCS) coming off a Peninsula Athletic League (PAL) title but failed to live up to their hype as they did not take home the CCS trophy. In his junior year, they won the PAL tournament again but failed to win CCS for the second straight year.

Thus far as a senior, M-A has not had their best season with an 8-7-4 record, but Shalowitz knows that the team will jell at a certain point, but the only question is, ‘when’? With CCS right already underway, Shalowitz wants to end his M-A career on a high note.

“We have definitely had our ups and downs, but when we are on I think we can compete with any team in CCS.”

Shalowitz has had a lot of memorable soccer moments such as winning an international soccer tournament in Las Vegas as an eighth grader and going to the Dallas Cup during his freshman year of high school. But one unfortunate moment stands out from just a few weeks ago in a PAL regular season match-up.

“I got a red card for standing in front of the goal to try and save a shot. The ball kind of hit me in the shoulder, but the ref thought it was a handball. So he gave me a red card and then I was suspended for one game.” 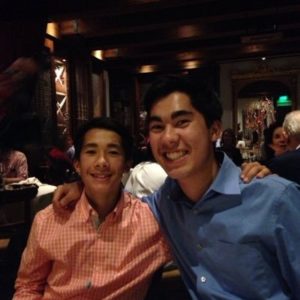 Shalowitz and his brother Noah both play soccer at M-A.

In addition to contributing to the rest of M-A athletics by cheering on the other sports teams, Shalowitz tries to give his younger brother Noah some soccer tips.

“He’s on JV, but he’s starting down there. Through high school, he will improve. We will go out and play together and I teach him some things about defense.”

Shalowitz is really thankful for the support his coaches give him as they show confidence in his ability through the good and the bad. He also dedicates his time with the soccer club, Juventus, both to improve his game and to help him grow as a person.

When he grows up, Shalowitz would like to work in the soccer department for Nike and travel around the world meeting new players. He might try and meet his favorite team, Barcelona.

But what Shalowitz is most proud of is being a captain for M-A. He loves, “being able to direct people. Having that leadership, they listen to you.” With the tools of the M-A’s soccer team at his fingertips, there is no telling how far M-A will go or what Shalowitz will do next.