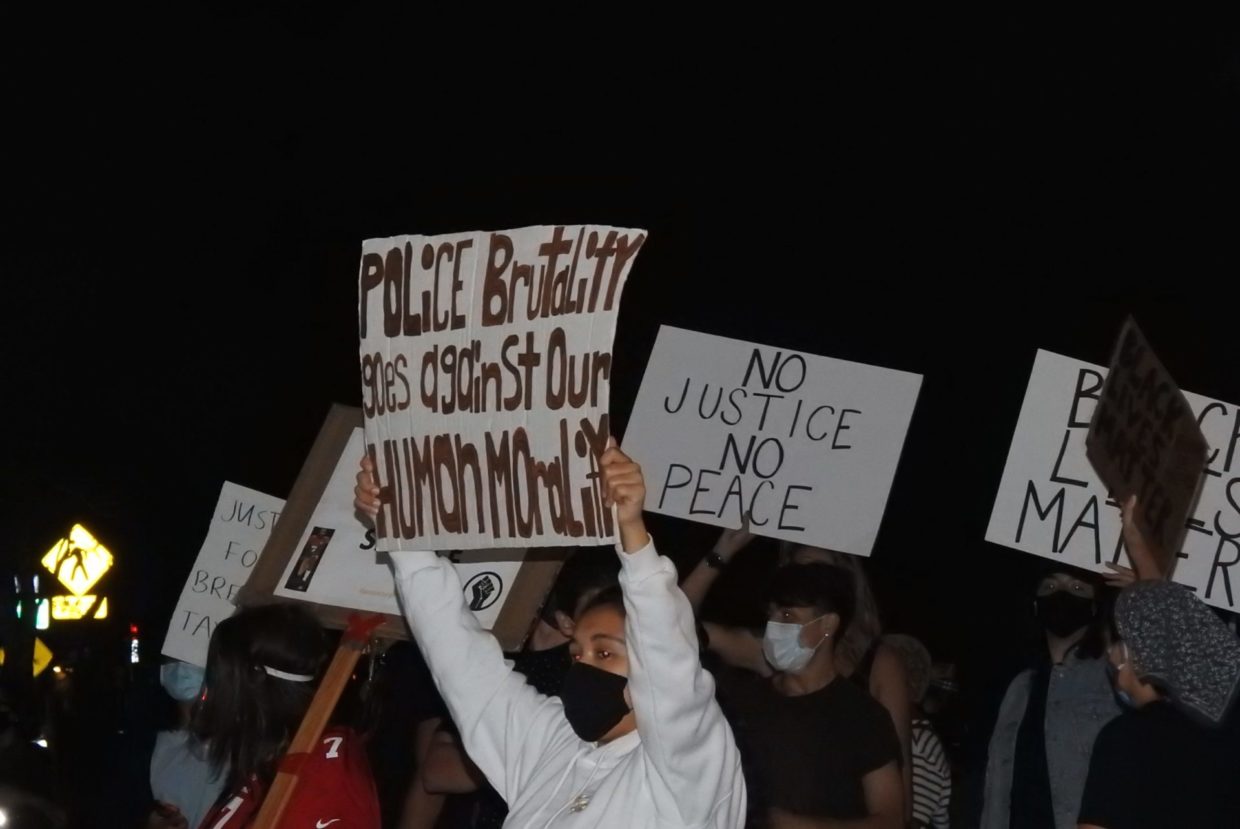 “Whose streets? Our streets,” protesters echoed, standing in the center of the El Camino Ravenswood intersection. Killed at the hands of the Louisville Police Department, protesters gathered in memory of Breonna Taylor, dismayed that this week’s trial resulted solely in the indictment of a single officer, and for the danger presented to Taylor’s neighbors, rather than the death of Taylor herself. 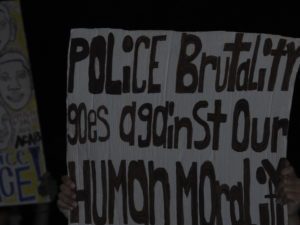 More chants followed, as the protesters marched from the courtyard in front of Cafe Borrone, to the Menlo Park Police Department, and back to the intersection of El Camino and Ravenswood. Cars began driving over the road median, in order to avoid having to make a U-turn in the intersection blocked by protesters. Other cars stopped by the protest honked, and inched forward toward the protesters. A leader of the protest responded to the frustrated drivers through a megaphone: “I’m sorry we’re interrupting your commute, but black people are dying at the hands of the police.” 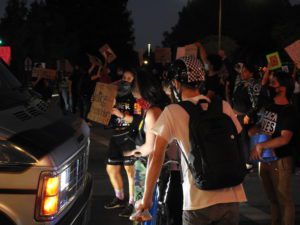 Protesters block the intersection, holding signs up to cars attempting to pass.

One protester, who wishes to remain anonymous, explained that she was participating in the protest “because police brutality is a huge problem in the United States, and I think it’s important that everyone comes together to show their support for the movement, continues to protest, and continues to fight so that the issue stays at center-stage.”

The coordinator of the protest, JT Faraji, is part of a larger organization called “Tha Hood Squad”, an art collective which organizes artists and activists of color, hoping to create social change in the Bay Area through protests, providing the Peninsula with 700-1000 free meals every Sunday, and holding other events dedicated to social justice. Faraji says, “I don’t believe in imaginary activism. Everything has to be because there is an action to be taken. If we don’t take action, there is no change.” Faraji explained that just last week, he led another protest in Greenfield against the exploitative practices in the farming industry, harming the farmers in terms of wages and labor benefits.

Faraji describes witnessing “racial corruption, profiling, false arrests, assault” in the police system, which he says “has been going on for decades and decades.” He continued, “For a long time, nobody cared. There would be all of these reports of corruption, and people didn’t care. Sometimes they didn’t even believe that all of this was going on in the Peninsula.” Faraji says, “there would be complaint after complaint, and you have to remember, when people file a complaint, that is very, very hard for people to do. It’s like filing a complaint with your abuser. In this case, you have to go to the abuser to file the complaint. There’s retaliation that you can look forward to, definitely, and you can almost count on nothing coming out of it. This has been happening for decades.” In terms of the refusal to indict the officers responsible for  Breonna Taylor’s death, Faraji said, “Of course, I think it is disgusting, but I’m not surprised; it didn’t catch me off guard. What would catch me off guard would be justice.”