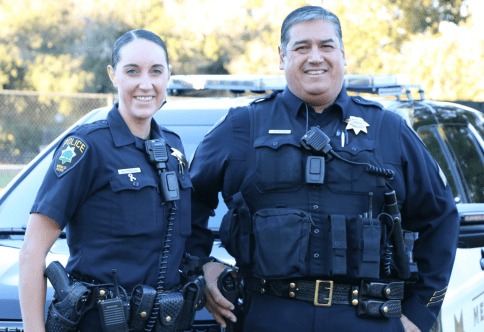 Over the past few years, a wave of officer-involved shootings has antagonized and furthered the distrust between police departments and minority communities in America. Two officers, Sergeant Matthew Ortega and Officer Mary Ferguson, from the Menlo Park Police Department (MPPD) described the MPPD’s accomplishments, their opinion on police brutality, the media portrayal of this issue, and how the MPPD works to build trust between the department and the community.

Ortega has worked with the MPPD for 17 years and currently oversees the traffic and community relations units, and Ferguson has been with the department for 11 years specializing as the Juvenile Community Safety Officer.

The MPPD has received three major policing awards in the past two years. In 2015, the MPPD won the Helen Putnam Award for Excellence in Public Safety in addition to the James Q. Wilson Award in 2016. This past October, the team was awarded the 2016 International Association of Chiefs of Police (IACP) and Cisco Systems Community Policing Award by the IACP, highlighting its progress in public safety.

With the increased attention and policing efforts in the Belle Haven neighborhood, there has only been one gang-related shooting since November 2013 after originally being “continually… plagued with gang-related violence,” according to the City of Menlo Park website.

In addition, the website states, “When compared to the past two years, the overall number of crimes at the end of 2014 within the Belle Haven neighborhood declined 42 percent over 2013, and 12 percent throughout the entire city.” Ortega hopes the series of awards received by the MPPD can be “a model for other agencies.” 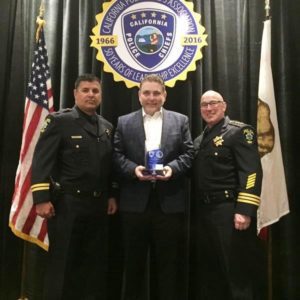 When discussing how the MPPD closes the barrier between the community and police, Ortega described their efforts to bridge this gap through events like Friday Night Lights, which was started by Chief Robert Jonsen in 2009 and specifically appeals to families.

In addition, the team works with students in a variety of ways; Ferguson described “Operation Freeze” in which policemen handed out popsicles to students properly walking their bikes and wearing their helmets when the Laurel Upper School opened.

Ferguson explained, “With building this trust at a young age, it sets a precedent…for these kids. Many of the kids that I deal with have had a negative interaction with law enforcement, none at all, or were told to fear law enforcement…By having them meet me, or meet law enforcement, on a positive platform at young age…instead of fearing us, they can turn to us for help and assistance.” 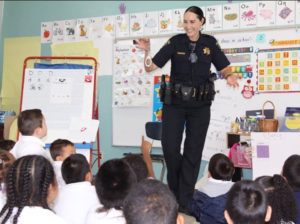 The MPPD highly values community outreach to build “connections in order to change the relationship between the police and the community,” said Ortega. “We want them to be able to trust us when they need help.” He explained that people’s perception of the police vary depending on previous encounters, but stressed, “Helping is our goal.”

“Our job is to keep the peace, [and] keep everyone safe.” -Ortega

Ferguson shared an interaction in which developing trust with community members proved its importance, rather than a heavy situation: “It was more like, ‘Oh! It’s just Officer Ferguson. She says everything is going to be okay.’ That trust was a big turning point… There has definitely been a shift.”

Ferguson described her role in the tension between communities and law enforcement: “Right now, we are in hard times, and I recognize that, but it is more of a time for me to do this work, and to really go out there, and make these connections with the kids now because it is going to make more of a difference because of… ” Ferguson is making an effort to end the “stigma and tense feelings towards law enforcement” by working with younger kids.

Ortega added, “As [Ferguson] talked about, the perception of law enforcement right now is [negative as] there are some bad things that happen that probably shouldn’t have happened. Not every police officer is perfect. Not every person who is a police officer should be a police officer as in any job. Unfortunately, the media is going to portray [those few]… bad people.”

When addressing the media’s influence on police antagonism, Ortega shared, “We do need to oversee ourselves better… as we are talking about the perception on law enforcement today because of the things that you do see [in the news].”

He described how the “first three things at the beginning of any [news segment] are going to be someone got hurt, someone got shot [because]… that draws people in.” Ferguson added that the media “isn’t always going to portray [the police] positively because they want viewers, and the way you get viewers is the way you create drama.” The two agree the “feel-good” pieces get overlooked too often.

When asked how antagonism of the police has affected Ferguson as an officer personally, she responded, “I think it has pushed me to go out there and make more contacts with the community…so they see that we are out there to help them because I think the only way they are going to change their perception is through positive contacts with law enforcement.” 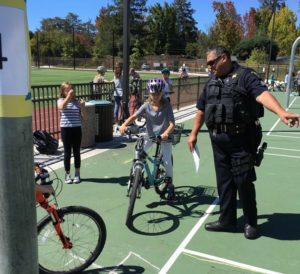 The MPPD engaging with students at Hillview Middle School.

Ortega explained his view on police brutality: “As a police officer, you should be held to a higher standard [although] I like to say there shouldn’t be a higher standard; [there] should [just] be the standard… and that’s just what we need to strive for. Ortega does believe the officers who don’t strive for act justly in difficult situations as a police officer do need to be brought out by the media.

However, he adds, “We are also human. We make mistakes just like anybody else.” Ortega emphasized, “In law enforcement, we do need to set that standard” of acting justly in all circumstances.

Concerning the MPPD, Ferguson added, “We do the job of trying to have an accurate moral compass and take the high road and do the right thing even when people might be calling us names or, you know, not exactly welcoming of our…presence.”

“We have to act professional. We have to have integrity. We have to keep our moral compass facing true north, and go to work everyday with a positive attitude.” -Ferguson

Ortega concluded that he wants people to remember “those good sides [and] good things…that happen between law enforcement and the community.”