“I remember [my father] said he was riding bikes with a couple of his friends, and they stopped at a place to get hamburgers. When they went in […] this guy looked at him and went, ‘Well I can serve you, but I can’t serve him.’ And my father’s close friends said, ‘If you don’t serve him, you’re not serving us,’ and they left,” Deborah Thomas explained in a video about her father Lonnie Thomas. That video, and photos by African American photographer John Johnson, can be found in this month’s virtual exhibit at the Menlo Park Library, “Black and White in Black and White: Images of Dignity, Hope, and Diversity in America.”

The exhibit highlights Johnson’s photography from the early 20th century, with the majority of his work done in Lincoln, Nebraska, featuring his neighbors, friends, and other residents of the town. Johnson photographed a variety of people, both Black and white, which can be seen throughout the exhibit. For example, one photo depicts a group of students from Lincoln High School that is mixed both in age and race, while another depicts three Lebanese siblings and one of their friends standing in front of a bicycle. 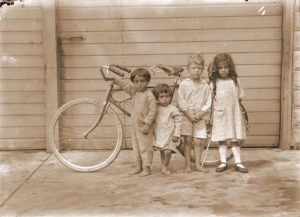 The three Zakem children and their friend (second from the right) in 1921. Photo credit to Douglas Keister Collection

Amy Cohen, the Executive Director of Exhibit Envoy, the company that put together and runs this exhibit, said that not much is known about Johnson and his life as “he and his wife didn’t have any kids, so there was no family history passed down from generation to generation.” She explained that the exhibit came about because of Douglas Keister, the curator of the photos, who first discovered Johnson’s glass negatives at a garage sale in Lincoln back in the 1960s. Keister, Cohen said, “reached out to us at Exhibit Envoys a few years ago, to do a traveling exhibit showing John Johnson’s work so that it could reach even more people.”

“I think these photos share a kind of history that we’re not often taught about in school,” Cohen said, “it’s pretty enlightening and pretty cool to see folks living in their daily lives. The way that John Johnson photographed them was so eye-opening compared to the photographs that we’re often fed.” Cohen added, “I think the other thing that’s really interesting to me, especially in terms of the conversation about race today, is that we see the photographs of white people and Black people together in a non-segregated society.”

The subjects of Johnson’s photos are what make them unique, Cohen explained, saying, “He’s clearly talented, and the fact that he’s an African American photographer, photographing African American people, that’s pretty key, and I feel like it’s a major part of photographed American history that we were missing.” This exhibit, Cohen said, “fills the gap in our American history knowledge, and it was really exciting to actually see what was going on in that time period from a member of that Lincoln, Nebraska community and to not have an outsider coming in and taking photos with people. That’s how you see real history, with stories and photos of common people doing what they would be doing every day. And I love that this exhibit shows us that in a way that I don’t think we get from a lot of history books or from schools.” John and Odessa Johnson on their wedding day in 1918. Photo credit to Douglas Keister Collection

Another aspect of Johnson’s photography that Cohen said makes him stand out was his use of glass plate negatives rather than flexible film when taking photographs. The exhibit itself says, “While amateurs took pictures using film, more professional photographers like John Johnson often took photographs on glass plates embedded with emulsion. Although glass plates are more stable and last longer than film, they are very breakable.” The exhibit also says that Johnson’s dedication to photography “is suggested by both the quality of his photos and by the quantity of his images discovered so far—approximately 500 glass plate negatives have been found in various collections.”

John Weaver, the Senior Program Assistant at the Menlo Park Library, said that prior to the pandemic, the library had been hosting occasional traveling exhibitions. However, with the onset of COVID-19 early last year, the Library began looking at ways to host online exhibits. Weaver said, “We thought it was really cool because we’ve tried to go online with most of the things we used to offer from movie showings, to cooking demos, and traveling exhibitions. So we’ve been trying to do what we can to replicate all that here in the virtual world.”

The exhibit became available on the Library’s website in mid-February during Black History Month, and Weaver said that the Library wanted to host this specific exhibit because “we want to make sure that as a city that we’re addressing diversity and equity and inclusion.” Weaver added that “one of the ‘Black and Whites’ in the ‘Black and White in Black and White’ exhibit, is that it wasn’t just photographs of Black families, but you see people of different ethnicities posing together, which is something we don’t think of when we think of the early 20th century.”

Weaver said he wants to recommend the “Black and White in Black and White” exhibit because it “takes something that was, initially, at its birth, a museum experience, and lets us explore it in our own time online, complete with those interactive elements, and complete with music of the era. It’s not the same as strolling through a museum and interacting with the elements a museum might have, but it’s what we’re able to offer, so it’s an enriching experience that we can have.” He added, “I love that it comes with a musical element…[you can] enjoy the music and just let it play and wash over you while you’re experiencing the artwork.” 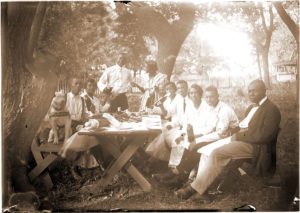 A small group of picnickers poses for a photo. Photo credit to Douglas Keister Collection

When talking about the value of the exhibit, Cohen said, “For those who have never seen these photos, or heard of John Johnson, I hope that this exhibit can shed light on a moment in history that is often overlooked—and that those viewers can walk away with a new understanding of how everyday Black and white people lived and worked together in Middle America 100 years ago.”

Putting on this exhibit, even online, is something Weaver said the Library is “happy to be able to do, to bring these different experiences to people…I’m excited that we’re able to continue doing that in this format.”