On Monday evening, the Menlo Park Library hosted a talk on San Mateo County’s LGBTQ+ history. The event covered over a hundred years of local queer history, from notable figures to arrests of LGBTQ+ people to community organizations.

The speaker, Michael Flanagan, is a history columnist for the Bay Area Reporter, an LGBTQ+ news organization, and a Menlo Park Library reference librarian. 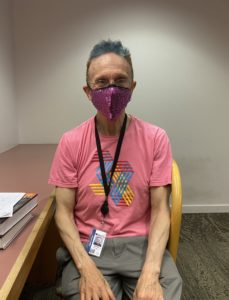 On studying and remembering LGBTQ+ history, especially from a local perspective, Flanagan said, “One of the things that makes it really important is because they’re trying to erase it.” He continued, “Particularly for people who are coming out in high school, they need to see that there have been people here dealing with this for a long period of time. You’re not the first ones.”

Junior J Mandelstam, who attended the event, said, “I feel like all of the discussion of California’s queer history is centered around San Francisco, and while that history is amazing, I really wanted to come tonight to learn about all of the stuff that happened closer to home.”

Junior Logan Greenbaum, who was also in the audience, added, “I just think it’s really interesting how much history this area has that you don’t hear about. For example, knowing that there were gay bars in this area up until the 2000s is really cool. I think that’s really neat.”

Flanagan’s presentation mentioned many gay bars from the area from the 1900s, including The Carriage, Dino and Til’s, Le Cabaret, B Street, and more. Flanagan said, “There were actually several gay bars in this one area [in San Mateo County]. That’s all in danger of being forgotten.” The last gay bar in the county, Shouts, closed in 2000.

Senior Elliot Brahana, another M-A student who attended, said, “Queer history is never taught as much as it should be, and while history classes don’t tend to cover local history, I think it’s really important to know about the history of the place you live.” As an example, Brahana said, “I never knew that the Four Seasons hotel, which I live near, used to be gay bars and a bath house.” Flanagan explained that gay bars used to be on the lot of the county’s Four Seasons Hotel, and had been disparagingly described as a “seedy strip of dive bars” before they were destroyed.

Flanagan provided an engaging opportunity to explore more local LGBTQ+ history. He covered dozens of people, places, and events, including both local trailblazers in the LGBTQ+ community and instances of homophobia in which the area has fallen short of support. Here are just a few of the things I learned:

California’s FAIR Act requires K-12 schools to teach “Fair, Accurate, Inclusive, and Respectful” history curriculum that includes the history of LGBTQ+ people and other underrepresented groups. However, Greenbaum said, “If queer history is taught at school—and that’s a big if—then it’s going to be Stonewall or maybe the AIDS crisis. I think this local history needs to be taught more because I’ve pretty much never heard of any of this before.”

Mandelstam also said, “The only reason I know what I do about queer history is because I’ve made the effort to learn things by myself, gone to the Genders and Sexualities Alliance, or researched these topics for school projects. And that’s because it’s not taught in schools. What is taught is very surface level, and for people who aren’t queer, that may be all they really know about our community. I wish it were more.”

To LGBTQ+ high schoolers, Flanagan said, “you’re really fortunate to be growing up now in that there are so many different venues of finding material for you, from graphic novels to streaming videos online. My advice would be: grab the day and look for your history. Look for what interests you.”

Finally, Flanagan said, “The thing that I think is most important for people in high school to realize is that any problems that they’re having right now are very short term. The world is going to change for you very shortly. It’s easy to be focused on things in the moment and to be upset, but try to look further beyond that and have a longer perspective.”