The Kiwanis Club in Menlo Park is dedicated to “serving the children of the world.” It is one of 16,000 Kiwanis clubs worldwide. Just last year, the club donated more than $90,000 for M-A scholarships, as well as to organizations including St. Anthony’s Dining Hall, Tour de Cure of Diabetes, Rebuilding Together, Special Games, and M-A’s Key Club.

To raise money for their Menlo Park community, the Kiwanis Club has a delightful annual Christmas tree sale. Located at Stanford, the sales were open daily from November 25 to Christmas Day. “We’ve sold out of the trees and wreaths faster than ever,” said Judy Horst, member and publicist of the club. The Kiwanis Club sold over 1,000 trees ranging from four to ten feet. Along with the trees, driven down from Oregon weekly, the lot had beautiful holiday wreaths, reindeer sculptures, and garlands. However, it’s the commitment of its members and their motivation to help the children of their community that has kept this 40-year long tradition going. 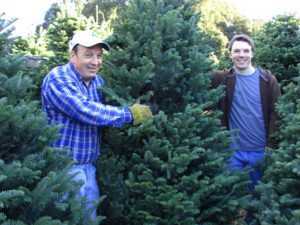 Horst, a fairly new member, started by donating her experience in marketing and public relations to the club. “As I was working with them, I figured it would be a fun thing to join…Imagine if you were always on the desk all the time and you didn’t go out to meet people, you wouldn’t have a good sense on what goes on in your community.” Although Horst is a busy self-employed person, her love for helping others and her interest in the Menlo Park community, where she has lived for 30 years, has drawn her to the club’s eye-opening service opportunities. “I think the truth of volunteering is you gain insight. You gain friendships. You gain the joy of just knowing that other people are benefiting from the activities that you are participating in.” She’s also amazed by the diversity of its members and how much she has learned so far.

Other than Christmas tree sales, the Kiwanis Club also has one other major fundraiser, the Bowlathon. However, it’s Christmas tree sales that make the biggest impact in fundraising. “You can see the difference in terms of what we raise with trees, which is three or four times [the money made from Bowlathon]!” she said. It’s this money that gets donated to events like the Special Games, National Rebuilding Day, and M-A student scholarships. 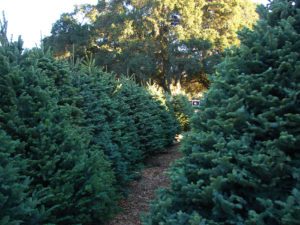 According to John Martin, who holds the Kiwanis Scholarship Chair, the Special Games “is an athletic event for the disabled and those with special needs. It’s where they can also have a chance to succeed and to win ribbons and prizes.” With the help of other Kiwanis clubs and M-A’s Key Club, the club holds the Special Games every year. About 1,000 students ranging from kindergartners to high schoolers from 60 different schools participated in events such as the 50-yard dash and the “Skittle Ball Competition” last year.

The Kiwanis Club also partakes in the annual National Rebuilding Day which is held on the last Saturday every April. In 2016, the club partnered with the Menlo Park Fire Department to restore a home in just one day. “We just really work hard for a day. We paint, we fix, we clean windows, we do the floors, and we work in the yard,” said Horst. The club has participated in the Rebuilding Together program for 26 years.

Horst is most proud of the M-A scholarships. She thinks the club has been “pretty darn successful in raising” the $1 million for M-A over the years. Just last May, the club gave a total of $41,000 to the eight graduates: Lesly Gopar Chavez, Ritwik Kesavath, Caroline Sobek, Sharon Ontiveros Cuevas, Orbelina Alvarado Carranza, Ariel Sullivan, Luis Acosta-Linares, and Carlos Acosta-Linares. She recalls how the Linares twins were both going to participate in internships at Kaiser before heading to college. “The mere fact that they were going to be interning before they went to college in their chosen field was just unbelievable, ” she said. She also remembers meeting one of the girls who had traveled to Mexico to work on environmental projects there. Horst is proud to help these individuals and fascinated that “a school like M-A can groom, teach, and point you in the direction to find what you are really interested in.” 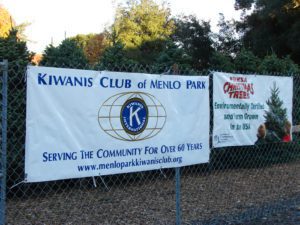 The club doesn’t give a certain amount of scholarships per year; rather, the scholarship committee carefully looks for students with “financial needs, a commitment to service, and [excellence] in terms of academics,” said Martin who helps to select the candidates. He encourages M-A graduates who have these interests, whether they are going to a four-year college, a community college, or a specialized trade or professional school, to apply and get information at the College and Career Center. “Several of the students are first-generation American students and for them college is expensive…A lot of those kids don’t have the money to go to the college of their choice, and our goal is to hopefully help them do that. [We] find a way to supplement whatever expenses that they can’t meet. That could be tuition, it could be books, it could be residences,” said Horst. Martin added, “We are hoping that they keep an involvement with service and that they will use their education in order to do good. Hopefully, not only will they have success but surely find a way back to their communities as well.”

By helping the community, the Kiwanis Club members have found they are gaining memorable, fulfilling experiences as well. “[Volunteering] is one of the best things anyone can do whether you are a young person… or an older person like me,” said Horst gratefully. Horst feels that volunteering is a learning experience, one that she began as a child and continues to explore now. Both she and the club encourage visitors to come to their Tuesday meetings at Allied Arts Guild, where they host speakers educated “in business, politics, public service, government, nonprofit, or education” for their members, according to their website. She has realized that you begin to “look at things not only from your own perspective. You meet people who have needs that maybe your volunteer activities can help fulfill. That doesn’t mean it’s money or it’s something that they lack, it just means that it can open your eyes as much as you can open their eyes.” Overall she feels she has “gained more than [she has] ever given.”