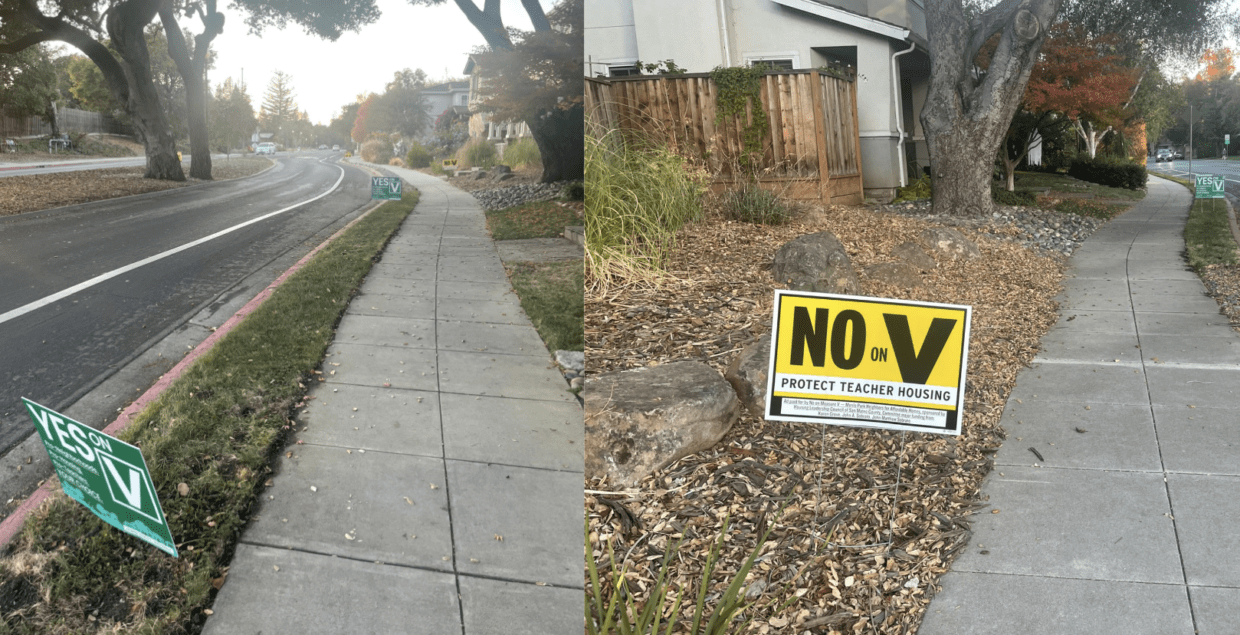 A drive around Menlo Park will quickly reveal that it is a town divided. Lawn signs both for and against Measure V line the streets, sometimes even side-by-side. This Election Day (Tuesday, November 8), Menlo Park residents will vote on this contentious ballot measure that could prevent the Menlo Park City Council from independently changing city zoning within single-family neighborhoods. If Measure V does not pass, then the public would be able to vote on zoning decisions.

Zoning debates have been especially prevalent in the Bay Area, which is infamous for its increased cost of living. Earlier this year, Woodside declared itself a mountain lion habitat to prevent duplexes from being built. Similarly, The New York Times wrote an article about the fierce opposition to multi-family townhouses in Atherton, the nation’s wealthiest zip code.

In the clash over Measure V, both sides have referenced the old Flood School site near Highway 101 in their arguments. The site now belongs to the Ravenswood City School District (RCSD), which plans to build a 90-unit affordable housing project on the parcel to house its teachers near campus. A new California bill, AB 2295, ensures that this will not require a zoning change. But if Measure V had passed and AB 2295 had not, the teacher housing project would have required a zoning change subject to a public vote.

Under AB 2295, RCSD could build at least 75 units on the Flood School site even if Measure V passed. This new development raises the question of whether Measure V will affect teacher housing. At an Almanac virtual forum hosted on October 6th, both sides weighed in on this topic.

At the forum, proponent of Measure V and Menlo Park resident Nicole Chessari said, “The new state law, AB 2295, allows the Ravenswood City School district to build 78 units of teacher housing on that parcel without a zoning change. So nonetheless, this is not about teacher housing.”

Opponents of Measure V still cast doubt on AB 2295’s ability to fix the lack of teacher housing. Margarita Mendez, a public school teacher and member of Menlo Park Neighbors for Affordable Housing (MPNAH) against Measure V, said that she spoke to an affordable housing expert who said that the density AB 2295 permits (30 units/acre) is lower than similar local low-income housing projects for teachers like Daly City’s 41 units/acre development.

In an August 28th No on Measure V informational meeting, supporter and Superintendent of RCSD Gina Sudaria said, “Of the third of the Ravenswood staff who took a survey for public journalism, 2% are currently unhoused and 43% are considering leaving the district because of their housing situation.”

Sudaria continued, “We have welcomed a third of our staff this year as new members. And we can put the dots together as to why that happened. I’ll be explicit. The cost of living is too expensive.”

Chessari said that under AB 2295 RCSD would need to prioritize housing its staff in the Flood School site, which would not be the case if the site was rezoned through Measure V, the traditional way.

She said, “Menlo Park City School District teachers interested in these units would have to put their name on a waitlist with the rest of the general public, so the slogan ‘Protect Teacher Housing’ is just a complete lie at this point.”

Meanwhile, the Yes on Measure V campaign highlights concerns about high-density development such as traffic, parking, and safety. Chessari said, “Yes on V gives a say about their neighborhoods, about where they live, about keeping their kids safe from dangerous traffic… The safety and lives of children playing outside of their homes is more important than developer profit or desires of special-interest groups trying to push as much intense development as possible.”

Chessari explained that the City of Menlo Park has identified 53 parcels of single-family neighborhoods that it deems great opportunities for high-density development, 12 of which are parcels with single-family homes whose fate she believes voters should have a say on. Chessari said, “To the extent those are good candidates for rezoning, those are gonna be for-profit projects, for luxury apartments or office buildings in single family home neighborhoods.”

To supporters of Measure V, it’s voters who should decide rezoning. Chessari said, “City council members are no more land-use experts than the general public. These are volunteer positions… I think NIMBY is a very vague term that gets applied to anybody that wants to protect their neighborhood.”

Juanita Croft, a longtime resident of Belle Haven and mentor at the M-A Computer Academy, said, “Yes on Measure V is saying they want it to be the voters who decide which developments can have multi-families. Since we already know their answer is always ‘No,’ there’s no doubt about what’s gonna happen.”

No on Measure V advocates argue that the initiative would exacerbate racial and economic segregation in the community.

Croft said, “I’ve been in Belle Haven for over 65 years. All of the affordable housing was built in District One [District of Menlo Park where Belle Haven is located]. Even though, quote unquote, they got rid of the redlining and blockbusting, they still continue to set up situations where all of the low income housing is built here in Belle Haven. It’s not distributed throughout Menlo Park. So this particular measure is actually trying to make it worse because they don’t want low-income housing on the other side.”

As election day looms, Menlo Park residents will soon see who will control their town’s zoning.