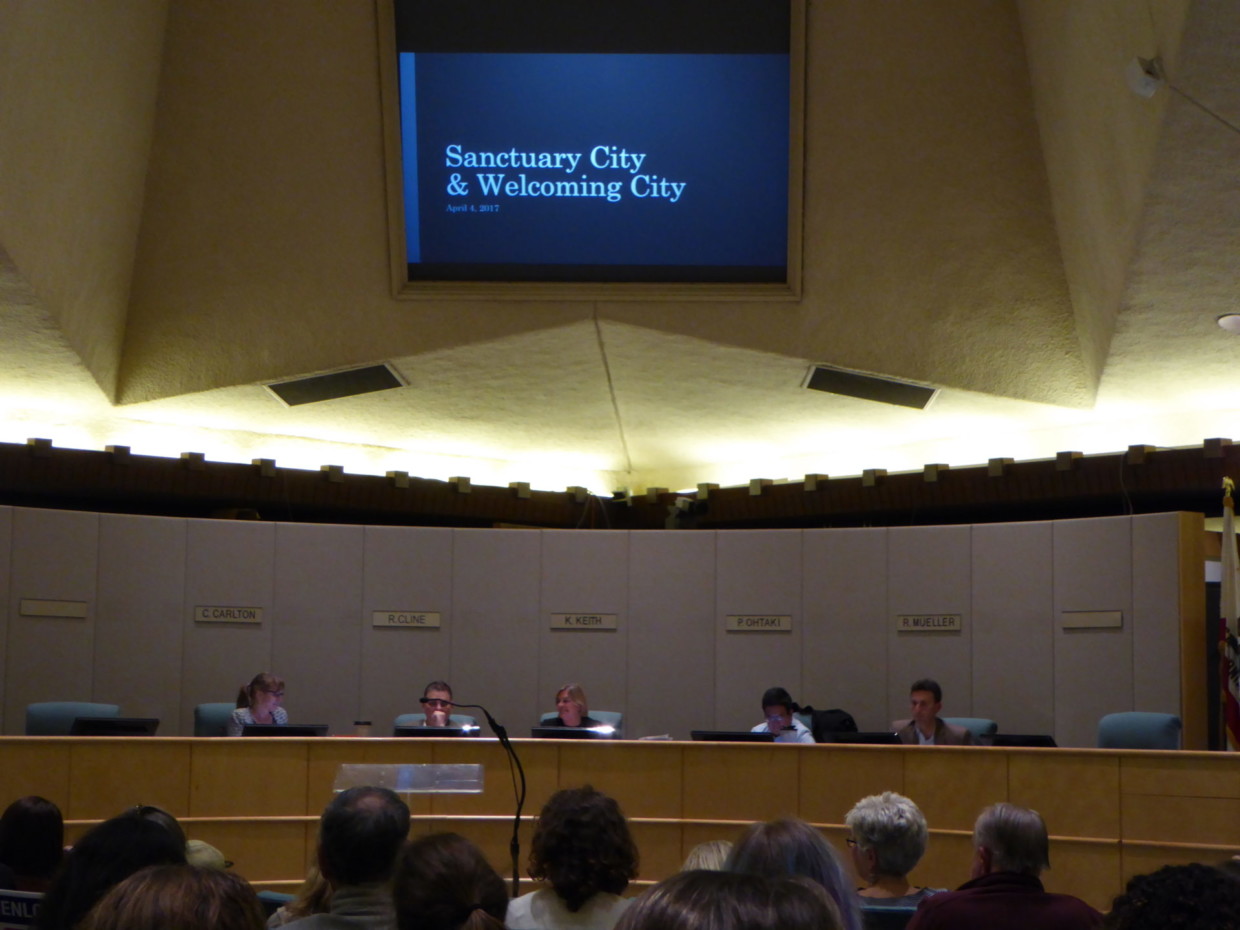 The city council of Menlo Park voted on, among other things, whether or not to become a ‘sanctuary city’ on Tuesday, April 18.

Commencing around 20 minutes late due to a closed session beforehand that ran over, the council guided itself through the normal motions of a council meeting. Mayor Kirsten Keith made a statement in support of Menlo Spark and green policies and proclaimed the month of April as Fair Housing Month in support of those who face discrimination in the housing market. Various vacancies were filled. However, the night began to turn explicitly political immediately after.

During the public comment section of the meeting, a routine section of a council meeting, 20 Menlo Park citizens gave speeches in support of adopting the motion. Across all ages and backgrounds, not a single person who went up to address the council spoke in opposition of making Menlo Park a sanctuary city. Many citizens attending came armed with signs urging the council to vote for welcoming laws. 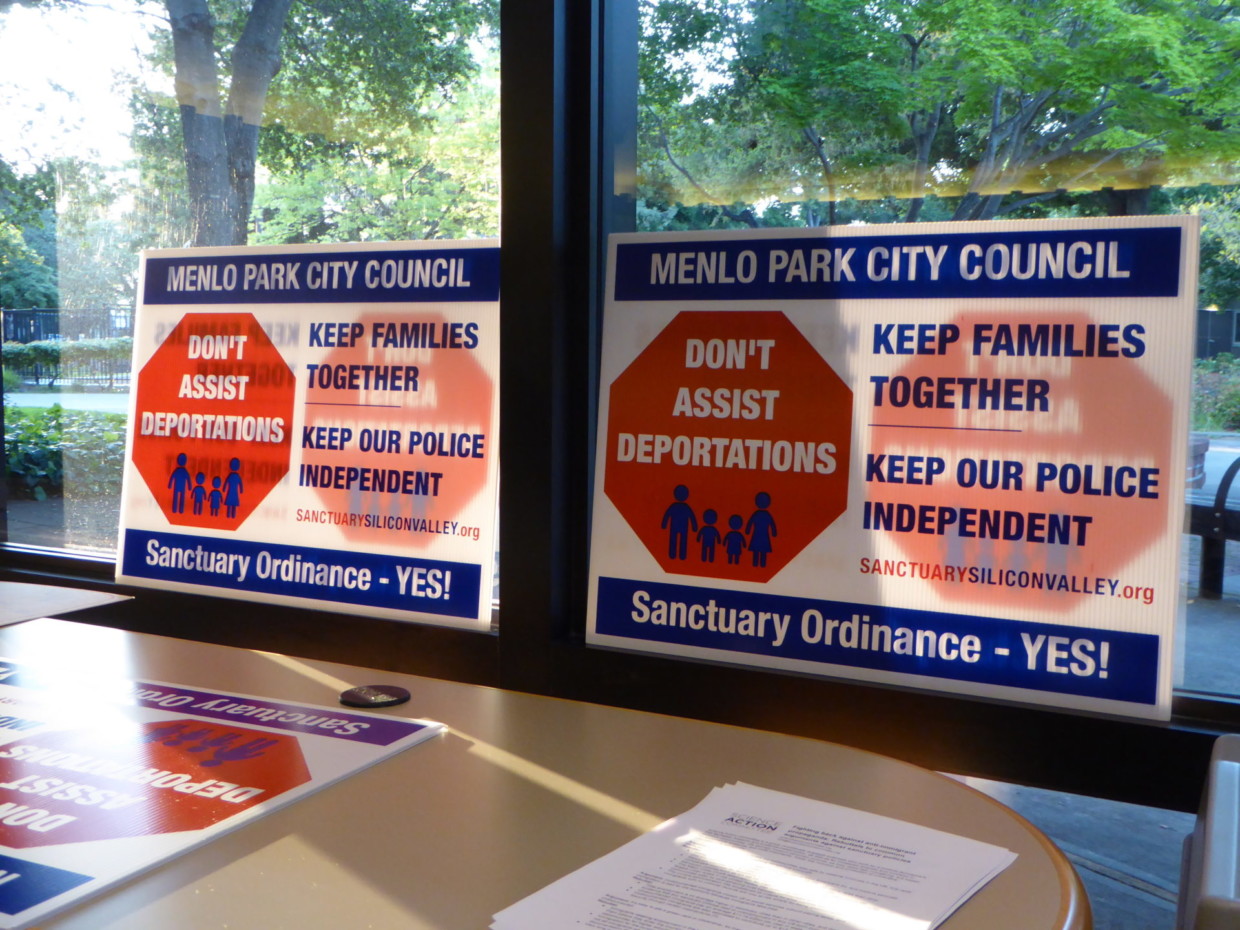 One of the youngest members of the audience, a 13-year-old boy from Hillview Middle School, shared a personal story of a friend he made in the Spanish-immersion curriculum whose parents and sister happen to be undocumented immigrants.

“They are civilians and work just as hard as you…” he reminded the council members. “So I ask you, please make Menlo Park a sanctuary city.”

Another citizen, Jen Mazzon, urged supporters of the notion to stand up to show their numbers in her address; around 2/3 of the room followed her lead. Many of those who spoke drew parallels between the profiling practices concerning undocumented immigrants and those utilized by the U.S. for Japanese internment and by the Nazis during the Holocaust, often relaying personal stories.

After a presentation giving statistics and facts concerning illegal immigration and the ramifications of adopting sanctuary policies, the council called upon various local officials for perspective and information. All five council members seemed to be in favor of welcoming policies and most of the discourse of the night concerned either specifics in the codification or the terminology of the motion due to the Department of Justice’s threats to suspend federal funding. 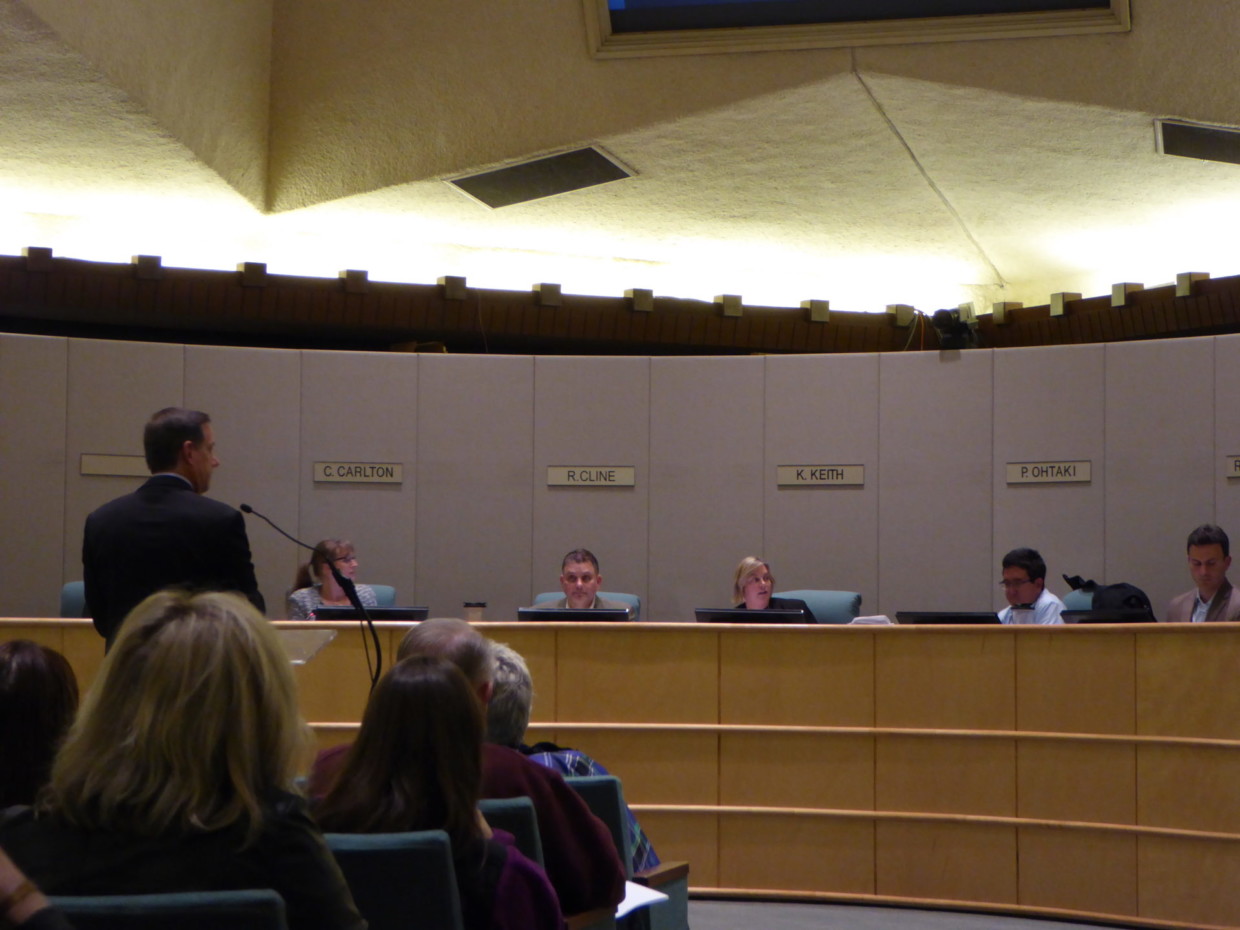 Assistant Sheriff Mark Robbins explained that the San Mateo Country Sheriff currently operates in a near-sanctuary-city way. Deputies and the office do not investigate the immigration status of those who they detain. Additionally, the sheriff notifies detainees of their specific rights concerning Immigration and Customs Enforcement (ICE), including their right to refuse an interrogation without a warrant and the right to a lawyer in such a meeting. The sheriff does not honor civil detainers issued by ICE or request to detain suspects for extended periods of time for ICE to arrive; the office has made no exceptions to this policy since its adoption in June 2014.

While questioning Menlo Park Police Department (MPPD) Commander Dave Bertini, the council inquired on the how the police department deals with detained undocumented immigrants in the status quo. Bertini explained that while “[he doesn’t] want to label us that way … we operate as a [sanctuary city]” and have since operated as such since January due to the protocol of the MPPD.

The council was set to vote on three items the night of the meeting: the Immigration and Sensitive Information Act, joining the Welcoming Cities and Counties Initiative (WCCI), and having Mayor Keith pen a letter in support of Senate Bill 54, also known as the California Values Act. By the end of the questioning period, the city council decided to suspend the vote concerning the first item of the three until the ordinance becomes “fully-baked” and drafters augment the terminology. However, the city council proceeded to vote unanimously in favor of joining the WCCI and publicly supporting Senate Bill 54 which would expand sanctuary status to the entire state. 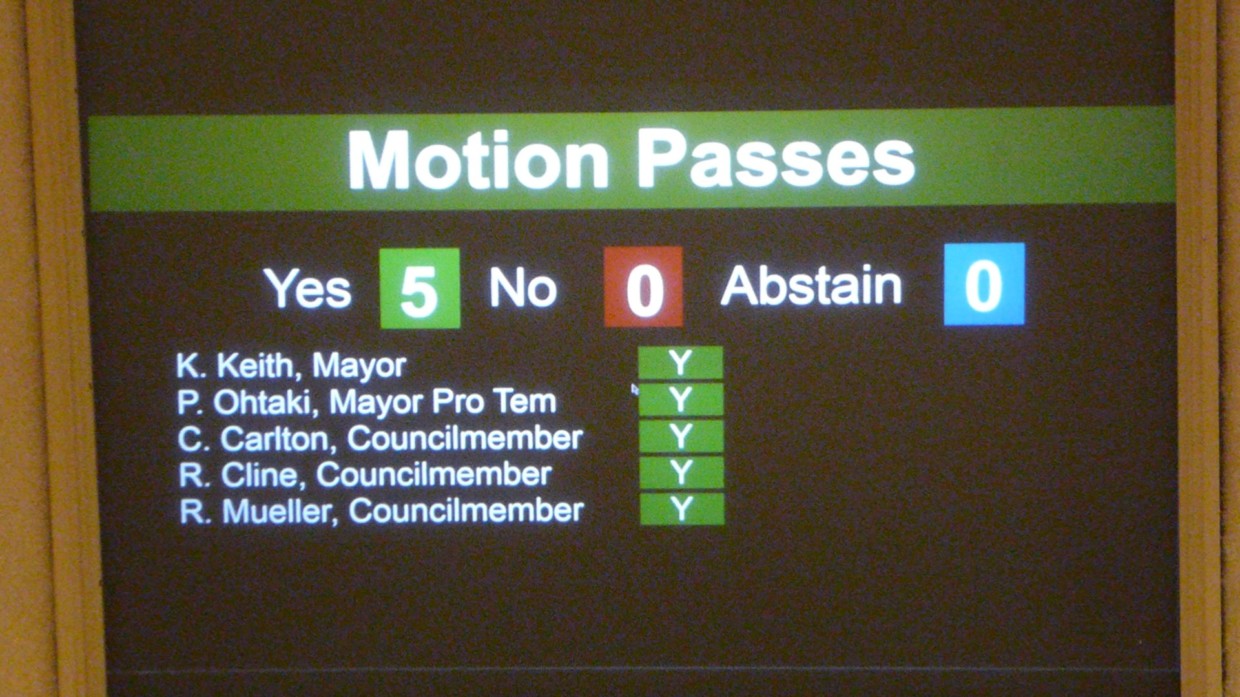 The council is still debating the wording of the new protocols that Menlo Park would be adopting and how to properly label the city after it passes. Alternatives include “city of refuge” and “welcoming city,” and there is debate as to whether or not officers should reserve the right to alert federal authorities in some cases. Mayor Keith and Councilman Ray Mueller will form a subcommittee to address these issues and the council will re-vote on the item on May 23.

Councilman Rich Cline stated just before the voting commenced that “no matter what happens tonight, people will call us a ‘sanctuary city,’” and nevertheless supported the notion that Menlo Park should be a community with open arms. Councilman Peter Ohtaki also voiced support for the idea of sanctuary laws, citing his family history involving the internment of Japanese during World War II as a point of sympathy.

This support of a welcoming notion is not surprising considering how liberal the Menlo-Atherton area is.