Driving is a rite of passage for teens and a staple of the American high school experience. Although California has seen over a 10% decrease in the number of teen drivers in the last decade, the traffic jam that is the student parking lot is proof enough that M-A has no shortage of drivers. To become a driver, though, you must first win in a battle of seemingly insurmountable odds. One where everything you do is held against you, where even the tamest of mistakes is bombarded with unreserved scrutiny. I speak, of course, of the driver’s test.

Alternatively, some students have no trouble with the driver’s test. For students like junior Sebastian Velasquez, the driving test is not a problem. “I don’t know what the big deal is. If you drive enough, failing your driving test is pretty difficult”, said Velasquez. According to the California Driver Handbook, youth drivers need to complete 50 hours of supervised driving practice before their test, which is what the state deems enough to become a competent driver. Velasquez went on to say that the 50 hours was “plenty, if you do that, you should be completely ready for your license.”

Of course, not everyone has such immediate success. Another junior, Ian Reis, is one of these unfortunate few. “I did my fifty hours, in fact, I probably did more than that, but I still failed. I forgot to check my blind spot, which was simple enough, but that instantly failed me”, he said. Reis went to the Redwood City Department of Motor Vehicles (DMV), which is the closest DMV to M-A.

When asked what he thought would have helped him pass, Reis said, “I wish I had known more about what I was up against at the Redwood City DMV, If I went in prepared, maybe I would have ended up passing.”

It is a good idea to be aware of which office one takes their test at. Each office has its benefits and drawbacks, but at the end of the day, what matters is the outcome of the test. With this in mind, here are the three primary options for DMVs in the Menlo Park/Palo Alto area.

One thing to be conscious of with the Redwood City test is that the routes generally take the driver through downtown Redwood City. While this, in theory, doesn’t sound particularly difficult, the increase in pedestrians and cars creates a whole new category of rules and regulations to be aware of. It is important to be comfortable driving in an urban environment, but it is an additional speed bump in the route to passing the test.

The Redwood City office is half the distance to M-A as the next closest DMV, San Mateo, and is open on Saturdays, a service provided by neither San Mateo nor Fremont. Convenient as it is, choosing to go here is truly a matter of personal preference, as the test is harder and the wait longer than other DMVs. An example route of the Redwood City driver’s test.

The San Mateo DMV, according to students who took their driver’s test there, offers a relatively easy testing experience. M-A junior Nate Holley, who got his license last March at the San Mateo office said, “My driving instructor was pretty relaxed, and the route was pretty simplistic. I know it’s slightly farther away than Redwood City, but it’s definitely worth it.” This seems to be the common sentiment among students towards the San Mateo DMV, as junior Martin Determan also stated, “The San Mateo DMV is definitely the way to go.” Despite this, there are a few things to stay aware of during the test.

“Be on the lookout for school zones,” said Holley. “Make sure to go 25 miles per hour or less, otherwise they will automatically fail you.” School zones are an easy place to go too fast, as the speed limit is substantially lower than that of the surrounding area. “As soon as you see that yellow-lined sign, begin to slow down.”

The office in San Mateo is in the vicinity of three different schools, and the one documented driving route passes by two of them. While the data set is pretty small (in terms of the documented driving routes found online), the sheer volume and proximity of schools around the San Mateo office mean that any given route will likely pass one or more of these zones. In other words, be aware of school zones throughout the test, as any speed over 25 miles per hour, as Holley mentioned, results in instant disqualification.

Overall, the San Mateo DMV provides a good alternative to the Redwood City DMV. It offers an easier driving test, though its relative distance is definitely a factor to consider when making the choice. 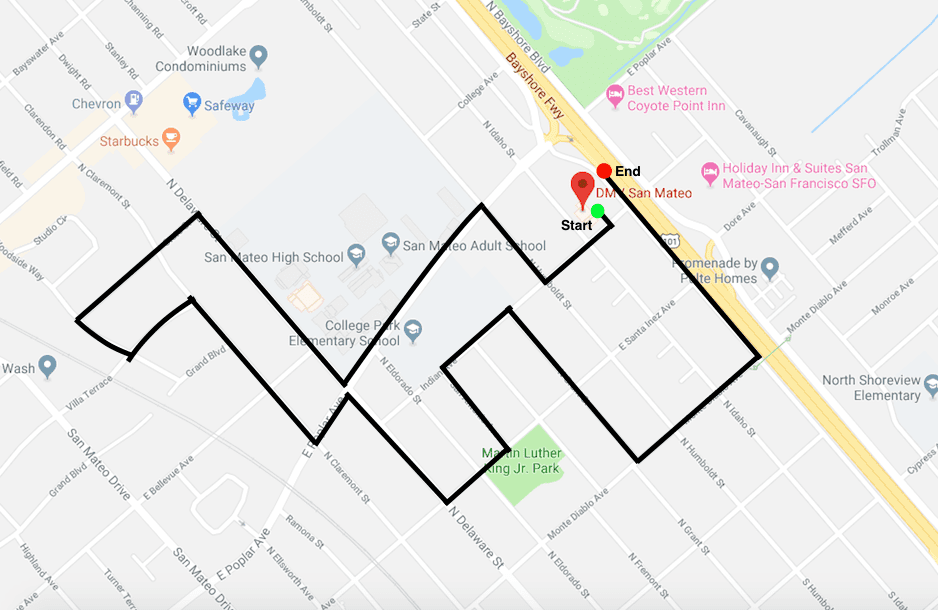 An example route of the San Mateo driver’s test.

The Fremont DMV is on the other side of the bay and is a pain to get to from Menlo Park, but it is the best option for those who have “struggled” with driving tests in the past. The driving test is notoriously easy, and the routes themselves are simple and well-documented.

Derek Golop, a senior, failed his first driving test at the San Mateo DMV. In comparison, he said that the Fremont “test itself was pretty straightforward.” He got his license on his first try at the Fremont DMV.

“The fact that I passed at all is an indication of its easiness,” he said. “They gave a lot of room for error, which made the test itself much easier than that of the San Mateo DMV.” DMV tests should generally be of a similar difficulty, regardless of what office it is taken at, but the Fremont office offers an easier alternative for those who need one.

Looking at some of the actual routes used by the Fremont DMV, the attentive viewer will notice that they tend to stay on more residential roads, avoiding those that are broader and more widely driven. Additionally, the routes much more rarely pass by schools, unlike the San Mateo test, and they don’t have a business portion, unlike the Redwood City routes.

While the Fremont DMV is a little bit more of a schlep, it is worth the extra distance for the struggling motorist. 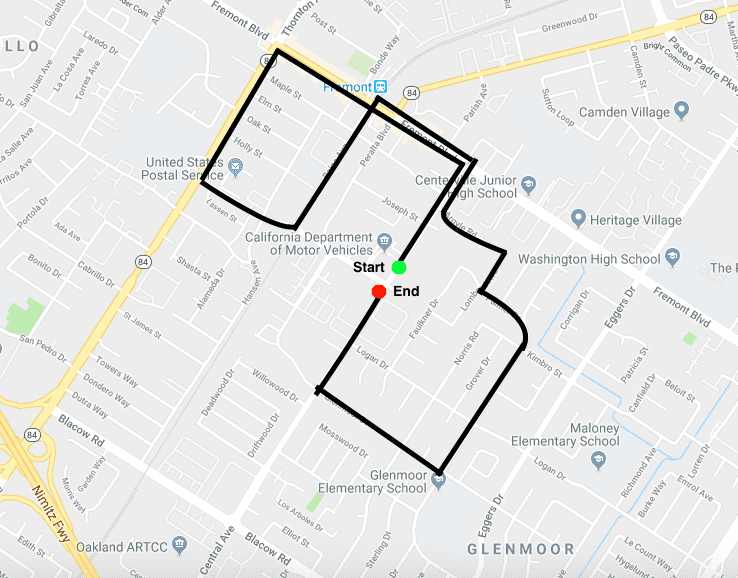 An example route of the Fremont driver’s test.