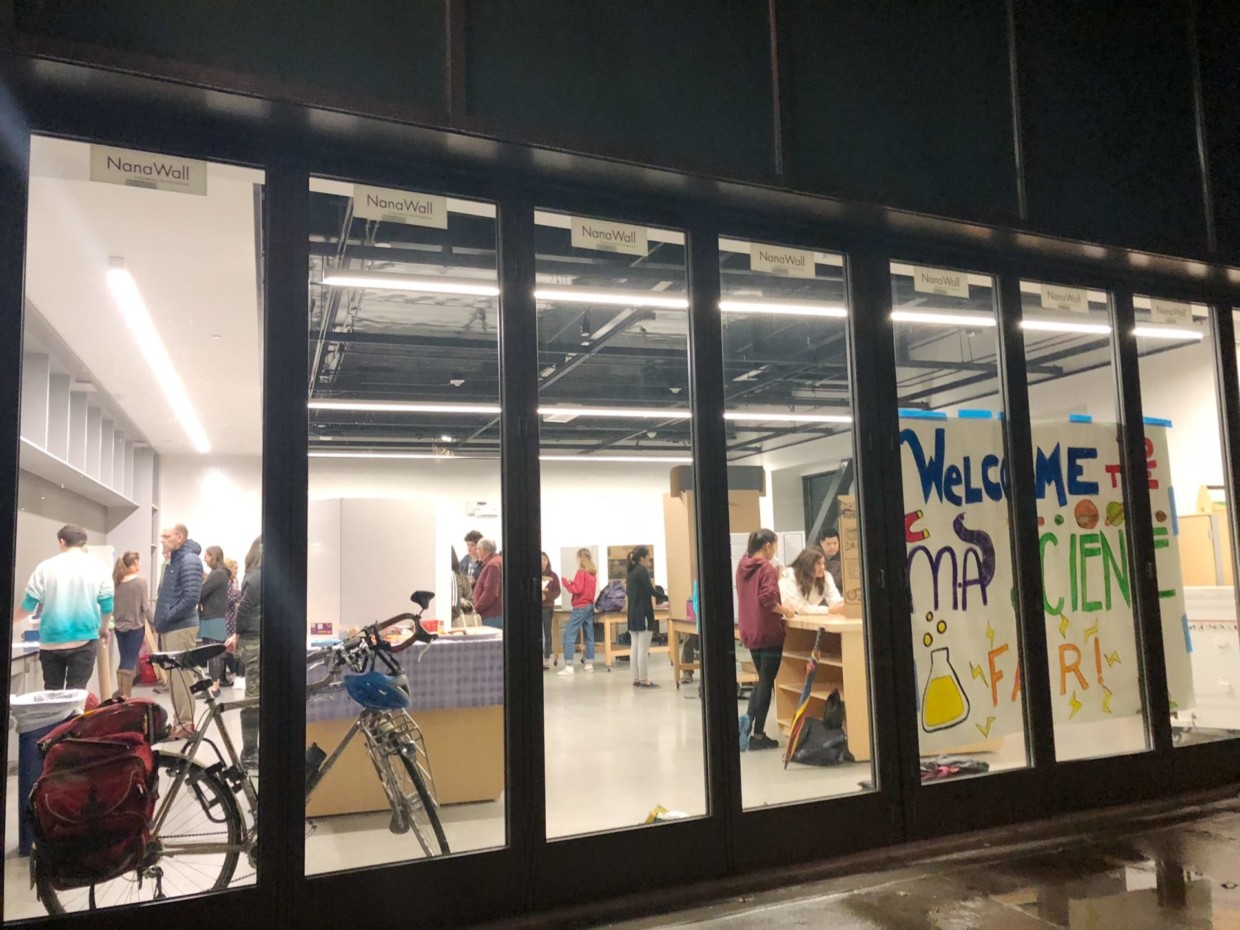 The Maker’s Space in the newly constructed Science Technology Engineering Arts Math (STEAM) building welcomed participants of M-A’s third annual science fair last Thursday, November 29. The rainy weather did not dampen the spirits of the parents, teachers, judges, and the eleven groups, all excited to experience the diversity of projects and the creativity of M-A students. 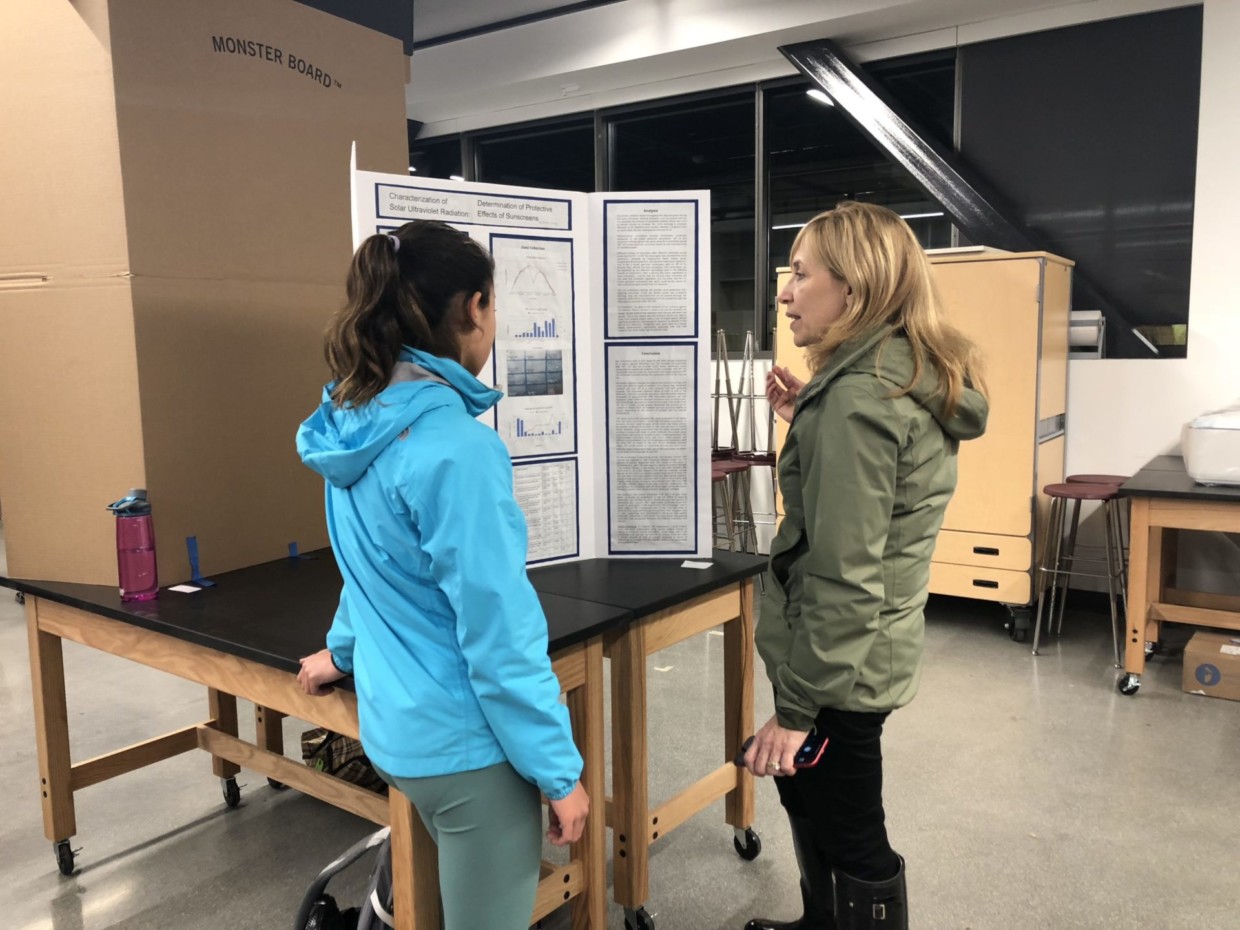 Chloe Leung won this year’s science fair with her in-depth project regarding solar ultraviolet radiation and the protective effects of sunscreen. Leung is a diver who spends countless hours outdoors in the sun and conducted her experiment using a variety of sunscreens and a UV meter to detect the amount of radiation being received by skin. She concluded that the “SPF in the sunscreen correlates to the amount of UV that passes through it and how well it protects our skin”, but “sunscreens with SPF of 50 and above worked just as well as those with SPF of 100 or more.” 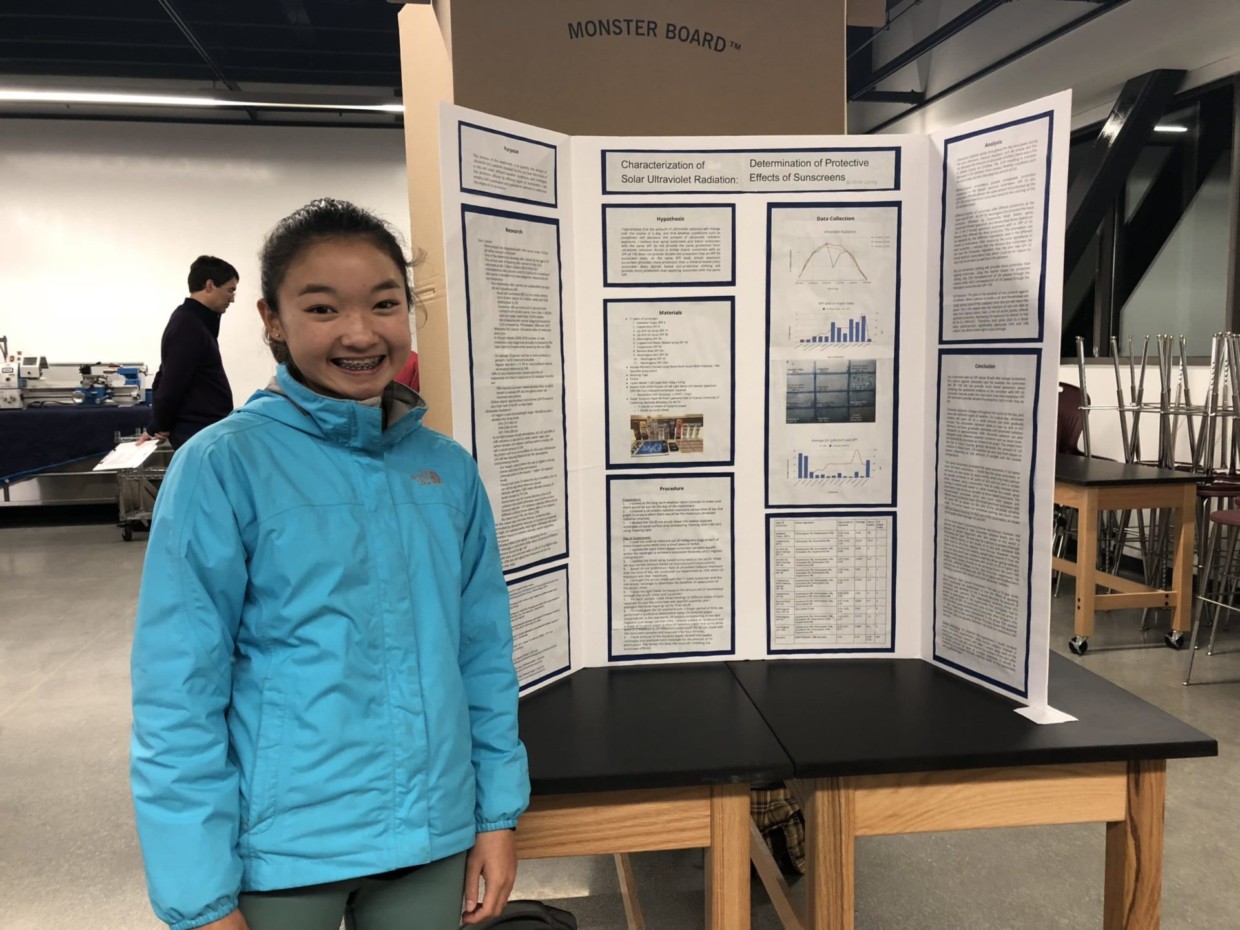 Senior Anna Quinlan founded the science fair her sophomore year, and with the help of Martha Richards, was able to create a successful science fair that will continue in the years to come.

As a child, Quinlan had always been “a curious kid, the one asking, ‘Wait, why is it doing that?’’ Her curiosity and drive have allowed her to conduct countless experiments to further develop her passion and come to new conclusions. When participating in a county science fair, Quinlan noticed that tons of students from schools in California take part in these events, and said that it was surprising to her as “here [at M-A], no one does it. It was kind of like there is this cultural difference.” Science fairs are heavily emphasized in middle school, and after participating in various county fairs, Quinlan decided that she wanted that same emphasis to continue into high school. Consequently, she has been recruiting members for the M-A Science Fair since founding it, especially freshmen, to “get them hooked.” 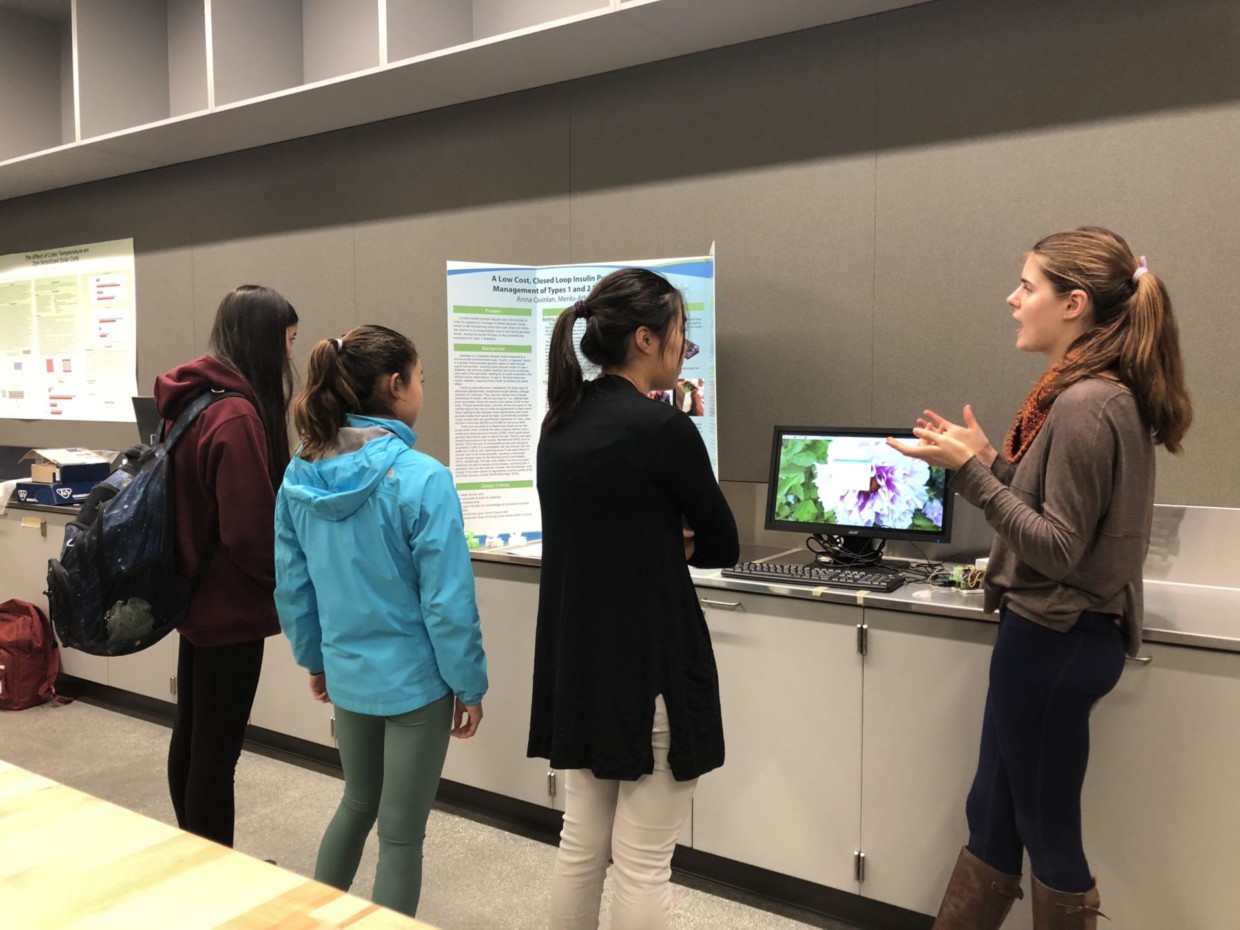 Founder Anna Quinlan explains her project to the budding scientists.

This year, Quinlan decided to create an insulin pump that can give insulin automatically, rather than the user intervention that is usually required. Her goal was to “bridge the gap between this insulin pump and the continuous glucose monitor… so that patients could wake up and not have to do anything.” She sent her insulin pump to type I diabetics around the country, and “ Had them run it parallel to their own pump, so essentially what that meant was they interfaced with it like it was their own pump, but the pump was never hooked in.  Instead, it dispensed water.” She “weighed the reservoir before giving it to them and after, and was able to calculate the percent error.” To her surprise, the accuracy of her fabricated pump was greater than one of the pumps on the market, an unexpected result. 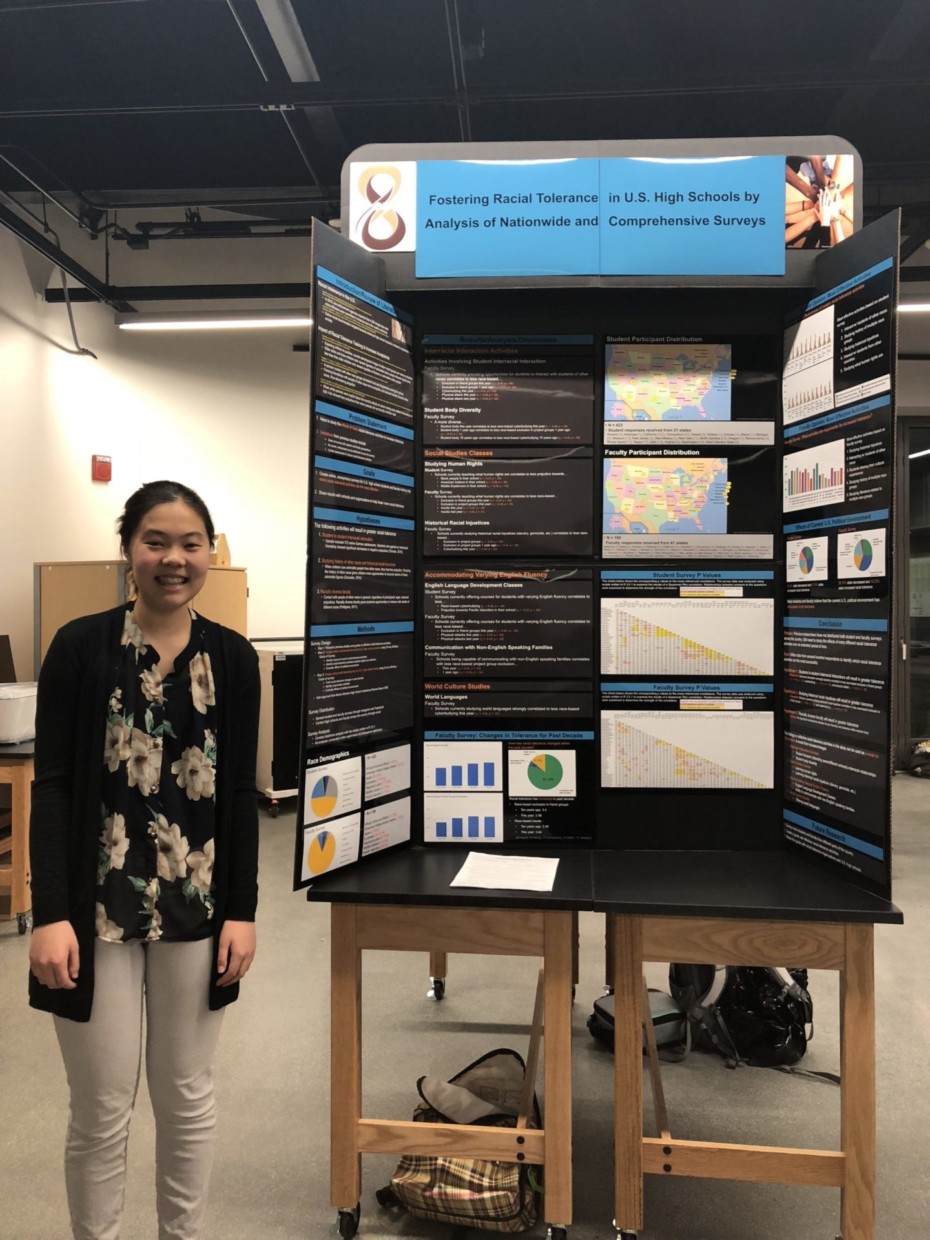 Audrey Ha conducted a project to research the racial tolerance of high schools throughout the country, and received third place.

Sarah Bargar and Grace Ryu stand next to their project exploring “the Effect of pH on the Energy production of Microbial Fuel Cells,” accompanied by Dr. Richards. 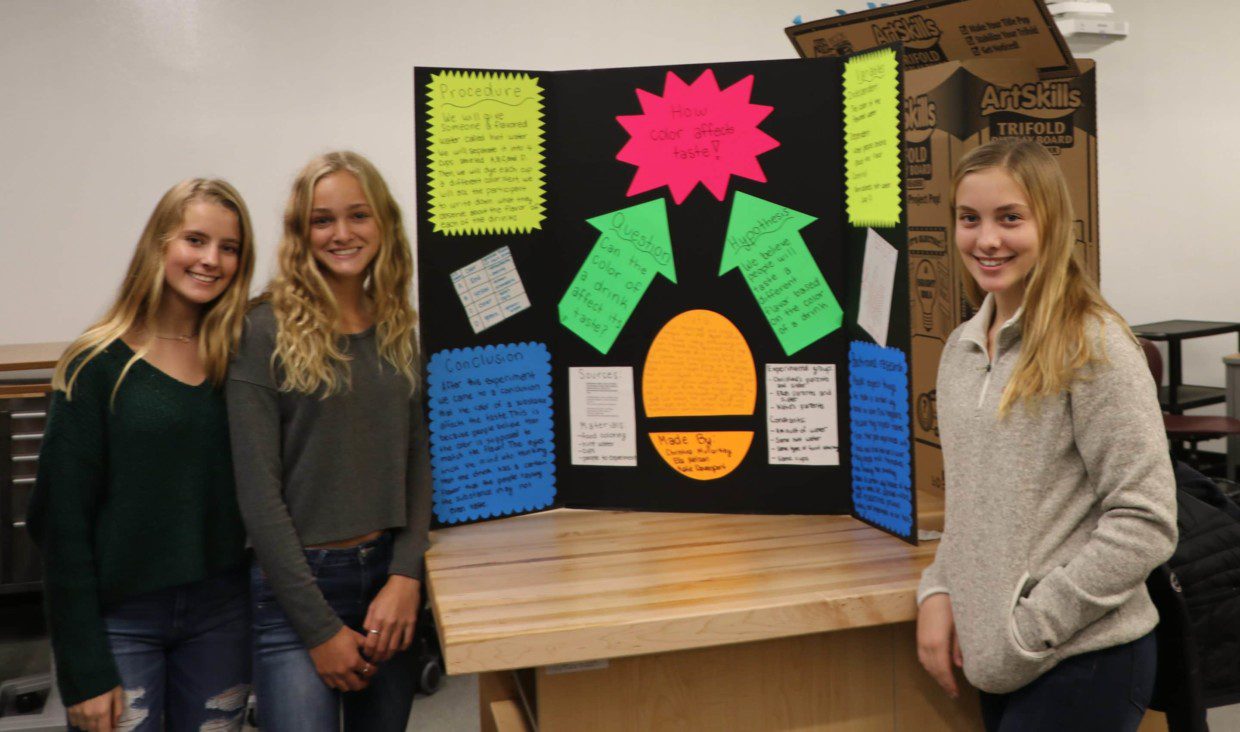 Richards is the advisor of the Science Technology Engineering Math (STEM)  club, which recruits and guides students to prepare for the science fair. She stated, “I also organize the science fair itself, so making sure we have space for it and the community knows about it, as well as recruiting judges.” Richards’ guidance extends past the scope of the M-A science fair, as she also helps prepare students for the county fair in March as well as volunteering for other science fairs in the community. She explains she does this to educate herself on science fairs and make students eligible.

Richards became involved in the science fair when Quinlan expressed interest in making science fairs more easily accessible for other students. Richard explained, “I have always wanted to run a science fair, and I thought that it was a problem that the science fair would ‘go away’ during high school since it’s very prevalent in middle school.” She goes on, “I really was waiting for a student to step up and take the reins and be president, so when Anna Quinlan and I got together to help prepare her for her science fair, she let me know she was interested in rolling that out for other students and that’s when we got things going.”

This year’s eleven groups makes the event the largest it has been, and Richards hopes turnout will be even bigger in coming years. She encourages students to become involved, stating “There is support. It doesn’t have to be intimidating, so please come talk to me if you’re interested.”