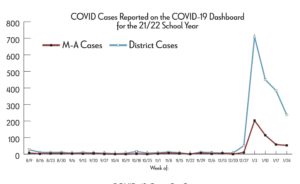 For the graphs in this article, the data for M-A and the Sequoia District came from the COVID-19 Dashboard.

In the weeks following winter break, M-A and the Sequoia Union High School District as a whole experienced a large spike in COVID-19 cases, which can be attributed to the spread of the highly transmissible Omicron variant. The weekly District cases reported on the COVID-19 Dashboard rose from seven to 710 over the course of two weeks.

At M-A in particular, COVID-19 cases increased more rapidly and to a much greater extent than county and state cases. According to The New York Times COVID-19 page, for the week of January 3rd, San Mateo County had 1612 cases for every 100,000 people, while M-A had 8120 and the District had 7100. The state’s spike in cases occurred a week after the District’s, and while the upward trend parallels the District’s, the spike was not nearly as drastic. 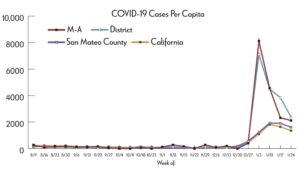 This graph reflects the amount of cases per 100,000 for each group.  The San Mateo County and California case data was taken from The New York Times COVID-19 page.

Despite the spike early in the second semester, cases have begun to decline, and will most likely continue to do so. While M-A has yet to return to pre-winter break levels, which were an average rate of three COVID-19 cases per week, M-A’s weekly case rate has dropped from over 200 to 53 weekly cases. District cases have dropped similarly, from 710 to 237 weekly cases.

This trend is also occurring nationwide, with a large spike in cases followed by a significant drop to nearly pre-spike levels. Other countries such as South Africa, where Omicron was initially discovered, and the United Kingdom have experienced a similar pattern in the wake of Omicron’s spread.

While it is still too early to predict exactly what shape the decline in cases will take, the emergence of past variants, most notably Delta, have caused similar spikes before case numbers returned to previous levels. If the Omicron spike is anything like its predecessors, it seems that we can expect a continued drop in cases back to pre-Omicron levels.

By The Numbers Community COVID-19 Top Stories No Comments