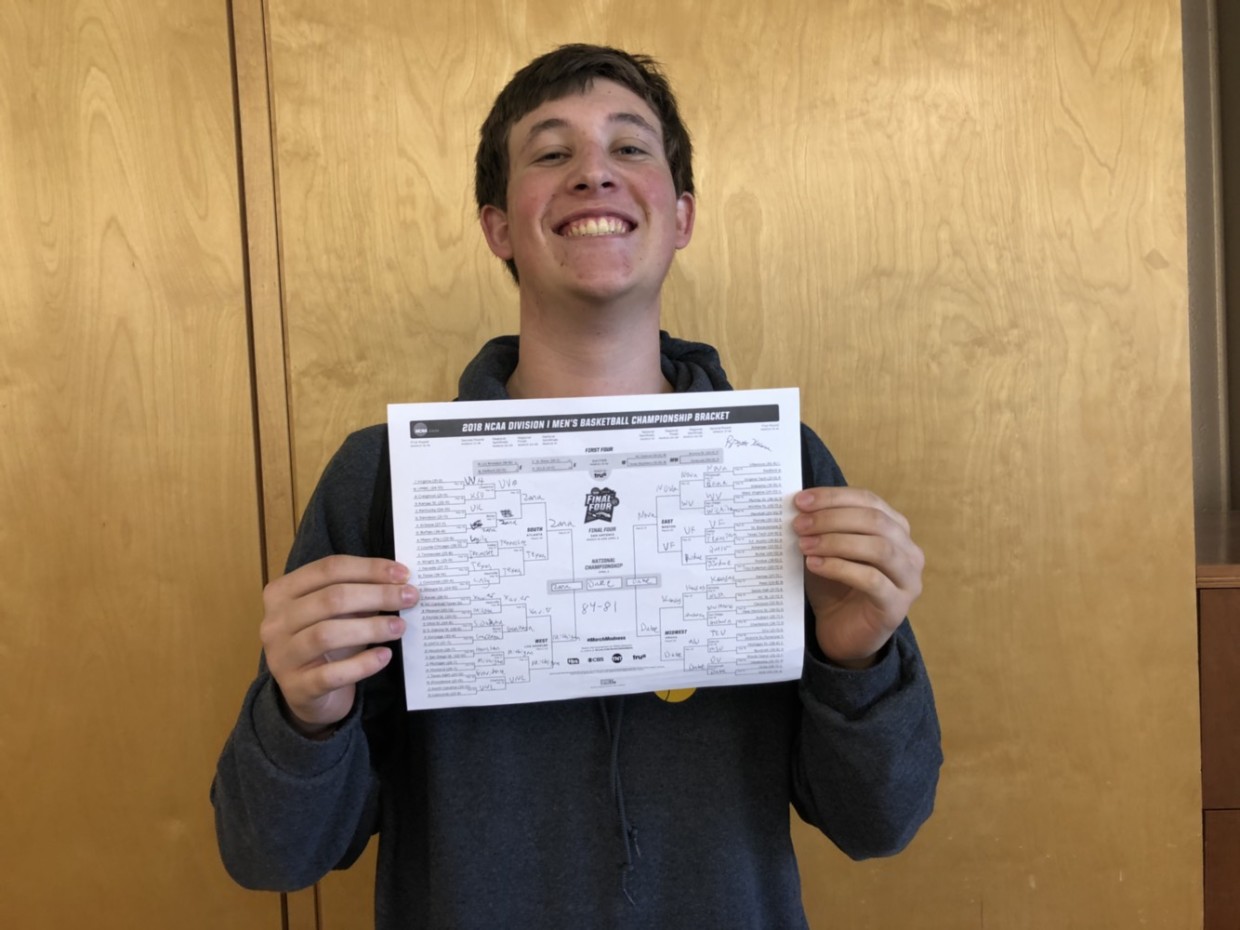 March Madness is officially here. The National Collegiate Athletic Association (NCAA) has picked their 68 teams for the annual College Basketball Tournament. Here at the M-A Chronicle, we are dedicated to giving a voice to our student populous, and as the brackets have been set and released on the CBS Selection Sunday Show, we know that many M-A students have begun their preparations. It is time to formulate your predictions, bracket pools, and plans on how to watch Murray State upset West Virginia while you are in Ms. Bryan’s Calc AB class. 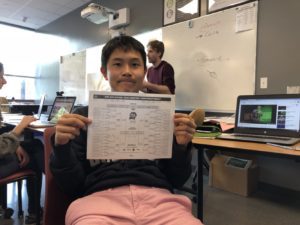 Tan holding his bracket while ignoring Mr. Mcblair and having “It’s All About the U” music video up on his laptop.

For the second straight year, I sought after the insight of Andrew Tan and his expertise in bracket picking. Tan relies on such strategies like picking Miami to make it to the Elite 8 due to the beloved “The U Song” shown by him writing out “the U” on his bracket. He also decided to employ his well-practiced tactic of picking Seton Hall to have a deep tournament run because of his self-made combination of his last name and the New Jersey University name into ‘SeTAN Hall’. Overall, Tan picked an analytically likely Final Four, with such favorites as #1 Virginia, superstar-studded Duke, and reigning champions North Carolina along with the wild card of West (‘Press’) Virginia as Tan hopes WVU’s high-pressure defense can propel them over Villanova and Butler respectively. 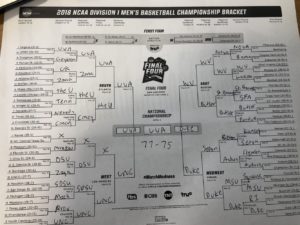 M-A Senior Brett Kessler also returns to the Chronicle for his second year of sharing his bracket picks. Kessler filled his bracket out during lunch, ignoring the conversation and laughter of his friends and focusing on his predictions. Brett again took Duke as his champion, for what seems like the tenth time in a row he has predicted them to be his champion. Brett explained his reasoning for his forecast of a Duke vs Arizona National Championship, “A Duke team with the greatest coach of all time finds its stride to win a title. This team reminds me a lot of the 2015 Championship team; senior guard with experience and a freshman point guard who is talented. Marvin Bagley is insanely hard to stop down low and should be a force in the tournament” arguing that this current Duke roster will beat an Arizona team that is “a very angry team right now. With the FBI report of Sean Miller and the false suspension of Alonzo Trier, this team is playing with a chip on their shoulder. They also have the best player in college basketball right now with Deandre Ayton, who is playing at another level”. Although Brett’s fandom of Duke has downgraded heavily from his former Grayson Allen Fan Club president past, myself and his friends will still find joy in reminding him of his reactions to the Lehigh and Mercer tournament upsets over the Blue Devils. 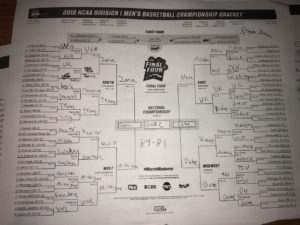 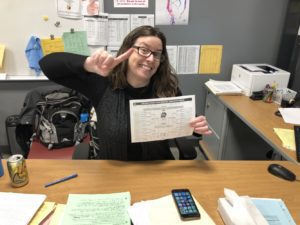 Ms. Viernisel holds up her bracket and a No. 1.

Ms. Viernisel picked her bracket with confidence. Zooming through her bracket while throwing in statements such as “Boilermakers [Purdue] weak!” and “Rock Chalk!”. Ms. V seemed confident in her picks, ending up going with Kansas as her champion in a one-seeded heavy final four. She did take a risky upset pick with Marshall over Wichita State that could be rewarding if it works out for her. 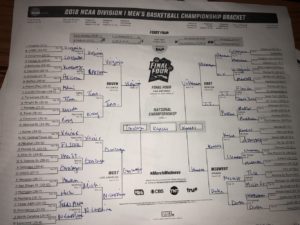 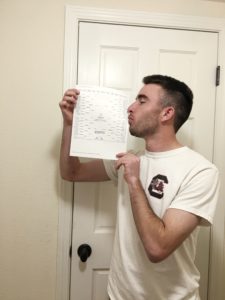 Dicks entranced by what he believes will be the perfect bracket.

A year after his South Carolina Gamecocks memorable run to last years’ Final Four that convinced Dicks to proclaim that he’d allow Sindarius Thornwell to father his future children, Dicks enters the tournament looking for a winning bracket once again. Unfortunately for Dicks, however, his beloved Gamecocks fell short this year, Dicks expressed his remorse on the situation: “South Carolina not being in the NCAA tournament brings me to my knees. Not only did the committee just hurt 12 players who have fought for months to play on that court but they have scarred a fan base that spans from coast to coast. It was simply unjust […] I stand by my Gamecocks in their fight for righteousness”. Despite the outward disappointment from Dicks, he thinks his bracket will reverse his recent misfortune. Picking Virginia overall he explained, “UVA is set up for success in their bracket, Kyle Guy is the truth.” Dicks continued, “Marshall will upset Wichita round one, I’m just feeling it.”. We wish Jonathan and his conveniently named “Dicks Dynasty” bracket the best of luck. 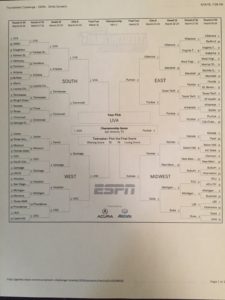 I wish luck to you all in your own bracket predictions and hopefully, another year of avoiding those Electronic Device Violations in the midst of class time and March Madness upsets.