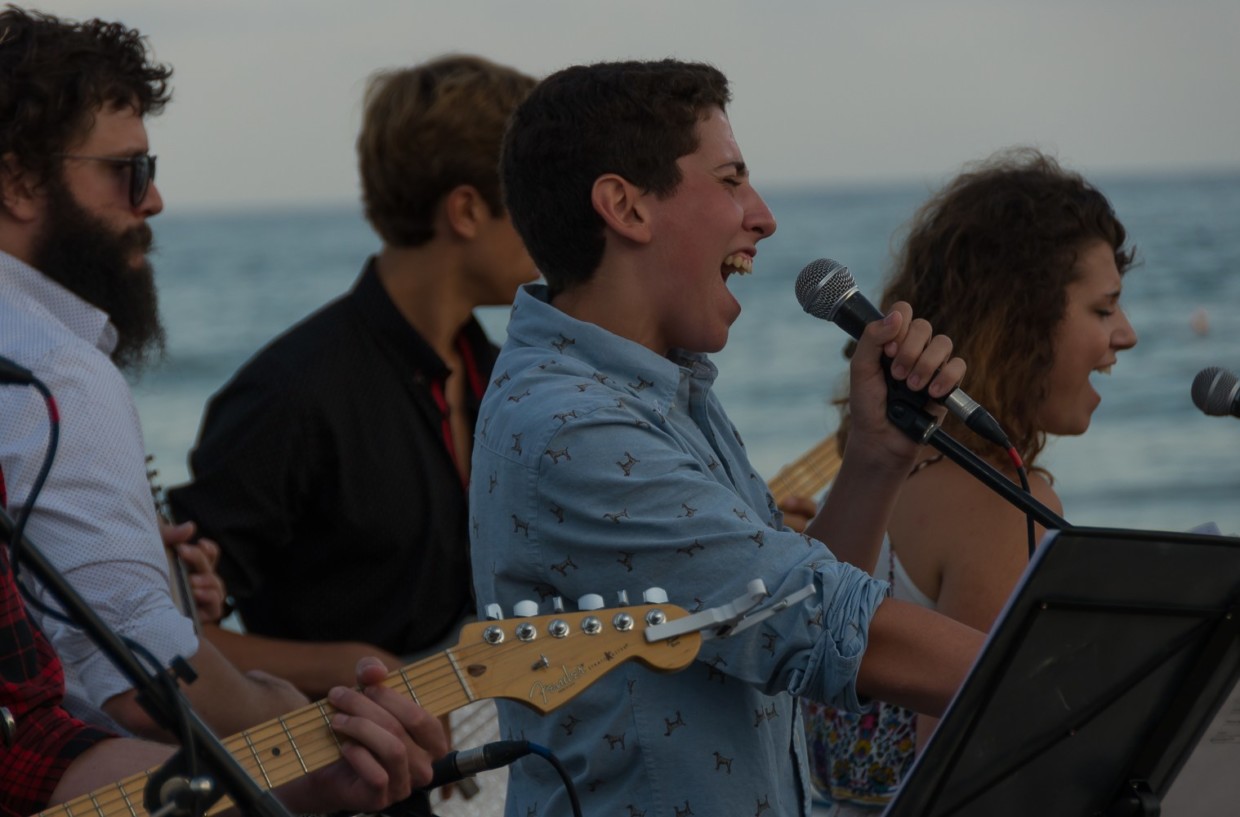 M-A Students Tour in Spain with the Riekestra

Jamming on the beach for hundreds of people. Living with bandmates thousands of miles from home. Playing a different gig every night. Usually reserved for touring celebrities, these experiences are commonplace for senior Janai Vliegen and junior Benjy Justus while performing with their band, the Riekestra.

Thanks to the creative arts programs at the Riekes Center in Menlo Park, around 20 students receive the opportunity to tour in Spain every summer. Both Vliegen and Justus were taking lessons at the center prior to joining the Riekestra last year. After being invited to audition, Justus explained that he joined because of the new experience it offered, “I wanted a different kind of challenge where I would have a lot of music at once, which is what the trip requires.” Vliegen and Justus both provide vocals and guitar for the band.

Vliegen and Justus both provide vocals and guitar for the band.

The Spain trip requires an audition and interview process, followed by months of learning the setlist. Vliegen initially found the process daunting; “you get this 40-song set list and you’re expected to learn it in a few months … The prospect of it is a lot more overwhelming than actually learning the songs.” But after months of rehearsing and local performances (including at Off the Grid), the group quickly bonded and was ready for the trip.

But after months of rehearsing and local performances (including at Off the Grid), the group quickly bonded and was ready for the trip.

The Riekestra plays in Sitges, Spain each year during July and August, performing mostly at clubs and bars and living in a shared apartment. Although they practiced tirelessly, Justus explained that he was still nervous to go on stage. “There’s a big difference between being at home, knowing I could drive home in like 15 minutes, and being thousands of miles away from my house. It’s exciting, but it’s definitely scarier.” 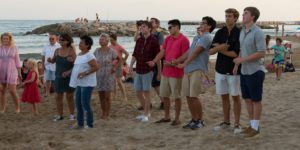 A crowd jams out to the Riekestra’s beach performance.

The band performs what Vliegen described as “crowd-pleasers,” a combination of classic oldies, pop, and the French and Spanish songs popular in Spain. She described her favorite performance: “We play this gig, literally on the beach, and there were like 100 people on the boardwalk and 100 more on the beach. There were just so many people, and they were all enjoying us so much. It was just the best feeling to be able to give that to someone.”

Outside of the Riekestra, Justus plays guitar for M-A’s jazz band and pit orchestra. Music is his creative outlet, especially since he is often more serious when it comes to school. His brother has also toured with the Riekestra for the last few years and is Justus’ greatest source of inspiration. “He’s the reason why I do the music I do, especially at the Riekes Center. He’s really a hard-worker when it comes to music, and it’s pretty admirable.”

Vliegen takes inspiration from her family as well, as they are all musicians. She recalled the reason why she started playing guitar in fifth grade, laughing, “my little sister started playing, and I said, ‘I could do that too.’”

One of Vliegen’s favorite things about music is “that it can bring a lot of people together, in the way that it did [on the trip].” After forming such close bonds with her bandmates, Vliegen formed her own band, the Great Cascade, with five other Riekestra members. They practice and play gigs year-round, performing more alternative songs and putting their own spin on the Riekestra’s setlist.

After forming such close bonds with her bandmates, Vliegen formed her own band, the Great Cascade, with five other Riekestra members. They practice and play gigs year-round, performing more alternative songs and putting their own spin on the Riekestra’s setlist. Members of the Riekestra pose with their instructors from the Riekes Center.

The Riekestra will be returning to Spain in July and August of this year, and Vliegen and Justus will be taking on more of a leadership role, mentoring the new members. They are currently in the audition and interview process for this summer. Justus said he would definitely recommend the experience because “[the trip] is such a different experience, that you kind of have to have fun. You’re in a different country and there are people around who are really enjoying what you’re playing. It’s just a really good feeling.”

Check out the Great Cascade at Piacere Restaurant on February 10 at 8 pm and recordings of the Riekestra performing in Spain below.