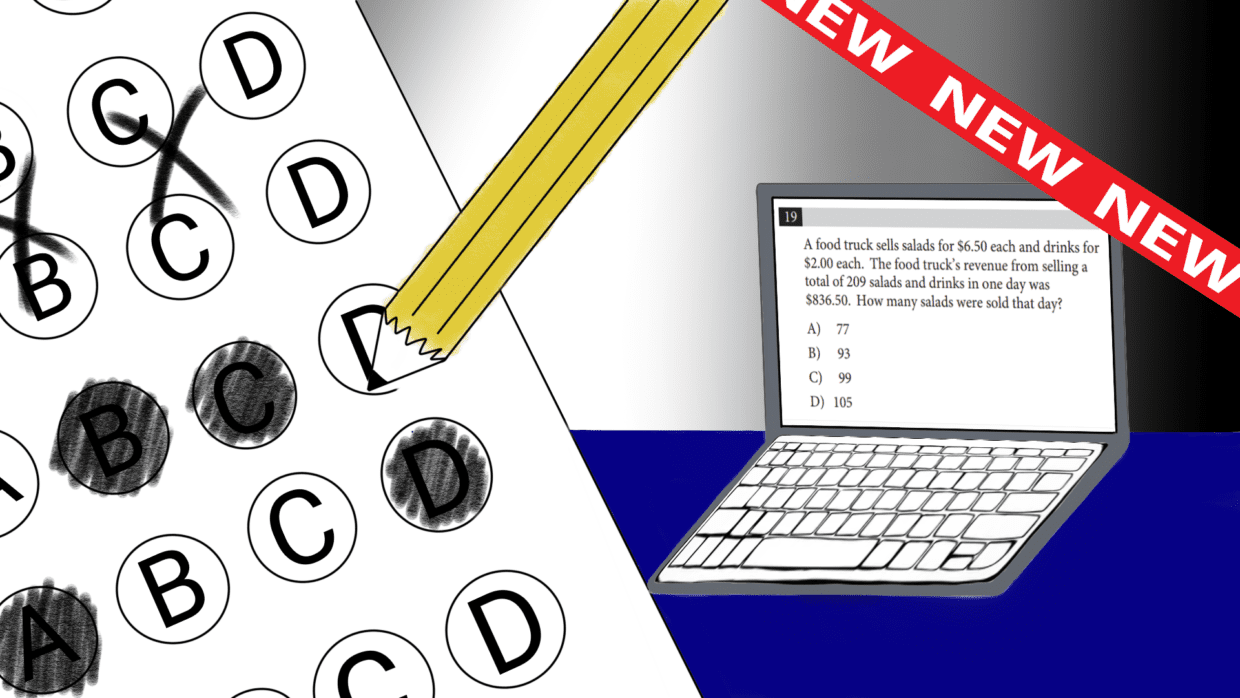 On January 25th the College Board announced that there will be a new, fully online SAT implemented in the US by 2024, meaning it will be taken by current freshmen and some sophomores.

​​According to the College Board, “the digital SAT will be shorter—about two hours instead of three for the current SAT, with more time per question.” The test will reportedly have shortened reading passages with one question per passage. Calculators will be allowed for the entire math section, and scores will be reported in a matter of days.

These changes will be implemented internationally in 2023, and in the U.S. in 2024. John Barnhill, a College Board Trustee, said that this is because “there aren’t as many tests available [internationally], and sometimes there are some dramatic cancellations.”

More details on the new exam were provided in College Board’s Frequently Asked Questions which specified that tests would be unique for each student in an effort to curb cheating and a paper and pencil version will not be available.

Freshman Mayssa Hofmann said, “I’m excited, but I feel like there is more room for error with computers, like auto-grading, and it’s easier to click the wrong button than pencil in the wrong bubble.” She added, “there will probably be less of a chance of cheating because with the paper tests you can just look over at someone else’s.”

Sophomore Jolene Chu said, “I feel like the SAT now is really long and it’s really physically hard to sit through, and making it take less time would really eliminate that.”

Juniors, on the other hand, are pessimistic, and some, a bit envious. Junior Leah Andersen said, “It is really unfortunate that we’re stuck with the longer written test because I really struggle with focusing on the reading section, and shorter sections would really help me.”

Another junior, Aidan Wescott said, “It seems like the schools are giving up on the traditional SAT, and are just trying to prolong canceling it for good.” He explained, “it seems more like a business proposal, less to help people succeed.”

Students nationwide who participated in the November pilot of the new digital SAT said, “It felt a lot less stressful, and a whole lot quicker than I thought it’d be,” and “The shorter passages helped me concentrate more on what the question wanted me to do.”

But does it all really matter? Over the span of the two-year pandemic, the SAT has steadily declined in popularity, most likely in correlation with the global pandemic. According to NBC, “about 1.5 million members of the class of 2021 took the SAT at least once, down from 2.2 million the previous year.”

For one, the University of California system voted to phase out the SAT completely by 2025. Colleges like Harvard, Stanford, Amherst, Johns Hopkins, Alabama, Georgetown, and Columbia are all test-optional through 2023 and over 1,600 four-year schools will not require scores at all for 2021 admissions.

However, The People’s Policy Project argues that the SAT’s primary purpose is to level the playing field, as it has been the system of doing so for 50 years now. This metric was intended to curb grade inflation and differing course rigor in high schools across the country. Nonetheless, many people argue that it doesn’t portray the whole student, and excludes worthy students from top schools.

Still, Andersen sees the exam as a “major stressor” and said, “There are so many schools that are still relying on SAT scores, even if they say they are test-optional, and look at them as a big part of a student’s application.”

By The Numbers College News Top Stories No Comments