On a rare Saturday afternoon game, the Bears pulled off a major comeback to beat the Bellarmine Bells by a score of 48-34. An early contender for game of the year, the Bears overcame a 20-point deficit to win their season opener in the sun.

The Bears started with an early 6-0 deficit after a long touchdown run by Bellarmine running back Ben Pfaff. Shortly after, Pfaff struck again, returning a punt for another touchdown to put the Bells up by 13 by the end of the first quarter.

With 9:22 left in the second quarter, the Bells grew their lead to 20-0, with the help of a long touchdown pass by Parker Threatt. Despite being down, the Bears had no intentions of giving up. M-A’s comeback all started with an interception on the next Bellarmine drive by senior Sherrod Smith. Smith’s play gave the Bears the ball with only half the field to go.

The very next play, M-A’s newest star player, senior Jurrion Dickey, who was barely cleared to play in time due to transfer rules, got the ball on a hand-off and took it all the way down the sideline for an M-A touchdown, making it 20-7. Unfortunately, the Bears couldn’t capitalize on the momentum, giving up another long touchdown on the ensuing Bellarmine drive, making it 27-7 with 4:13 left in the half.

With time winding down in the first half, M-A was forced to punt, but after the Bells receiver fumbled, junior James Gray was right there to get the ball back for the Bears. A couple of plays later, senior quarterback Billy Johnson got the Bears’ offense rolling with a long touchdown pass to Dickey, making it 27-14 Bellarmine at halftime.

After the half, the Bears defense came to life. Led by senior David Tangilanu, M-A got the ball back quickly and scored another touchdown by Smith, cutting the deficit to just six points. The Bears forced a three and out for the Bells and immediately scored another long touchdown run, this time by senior Noah Garcia-Standlee, putting the Bears up 28-27 with 6:08 left in the third quarter.

As the Bears levied their momentum, Senior Kameron Hawkins capitalized defensively with an interception which he returned for a touchdown, increasing the Bears lead to eight points. Hawkins said after the game that all he “had to do was be patient and disciplined.” This play by Hawkins was a true turning point in the game, and the Bears were propelled into full force once again.

After the defense shut down the Bells offense again, Johnson hit Dickey in stride for a 65-yard touchdown, making it 34 unanswered points by the Bears. M-A’s lead rose to 41-27 at the end of the third quarter.

The Bells didn’t go down without a fight, however. Running back Pfaff scored his third touchdown of the day in the fourth quarter, which narrowed the gap between the two teams. 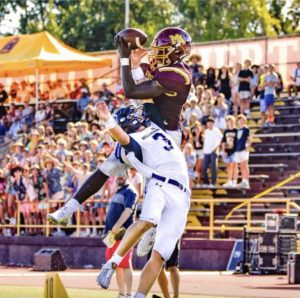 Dickey catches the game sealing touchdown, his fourth of the day

In the end, it was a perfect throw from Johnson to Dickey in the corner of the end zone that was the dagger for M-A. Dickey had six catches, 219 total scrimmage yards, and four touchdowns, paving the way for the Bears’ victory. Dickey later said that, “It felt amazing to put on a show for my hometown, and this was such a great way to open the season.”

After the game, Johnson said, “If people keep picking against us, I’m just going to laugh at them.” Johnson has been a true leader for the Bears over the off-season. After showing up to every workout since December of 2021, and countless hours of training and team building, Johnson also said he feels “extremely vindicated, and I’ve been saying we were going to come win for a long time” after overcoming adversity throughout the off-season and the game. Many analysts predicted that M-A would not be as strong of a program after losing so many key players, but after almost a year of hard work, the Bears are finally starting to prove the doubters wrong.

Undoubtedly, the Bears will continue to be tested throughout the season, but Saturday will go down as a statement win, and the statement was: the Bears are back.