M-A won first possession, but the ball turned over quickly and Aragon scored within the first few minutes. Through efficient plays and a penalty shot, they scored five more times in the first quarter. Despite several skillful saves by Perazich and close shots by A. Wescott, Lee, and Podoly, the score was 0-6 at the end of the first quarter, with Aragon on top. 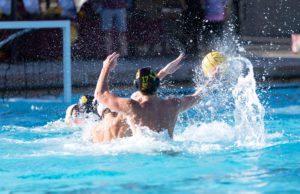 Freiermuth looks to get shot off

Early in the second quarter, junior Vaughn Freiermuth scored twice, including with a penalty shot. This was followed with a goal by sophomore Casey Watkins, and a skillful spin move by sophomore Drew Wescott that energized the crowd. The new momentum was interrupted slightly due to a steal and drive by Aragon’s #18, Xavier Mackenzie, but Perazich managed to block his shot. Under pressure from two defenders, Lee scored M-A’s fourth goal of the game. This was followed by a save from Perazich. At the end of the second quarter, the score was 4-10, with Aragon and M-A tied for goals in the quarter.

Starting off quarter three, “dynamic duo” Watkins and Freiermuth scored off of an assist from Freiermuth and a smart shot by Watkins from set. Sophomore Dylan Scirpo scored with a lob that caught Aragon’s goalie by surprise.

Even with Aragon playing more players due to an M-A ejection, Perazich blocked a shot. Wescott scored, then despite aggressive defense by the Bears, Aragon responded quickly with a goal of their own. Freiermuth made the Bears’ next goal. Thanks to the Bears’ hard work, M-A won 3-1 in the third quarter, but the overall score at the end of the quarter was 7-11, with Aragon still on top. 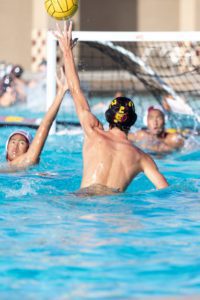 Scirpo rises up for shot

In quarter four, a well-executed play with exceptionally quick and accurate passes led to Podoly’s goal. Watkins then scored off of a foul, but he had drifted within 6 meters of the goal before taking the shot, so the goal was void. The Bears quickly won back possession, and Watkins scored! Aragon’s Mackenzie made another steal, but Perazich once again blocked his shot. With forty-five seconds left in the game, Aragon scored for the fourteenth time.

After a slow first quarter, the Bears dispensed an impressive effort and played an excellent game on senior night, winning the last three quarters 10-8. Junior Sina Kassayan, felt as though the team, “played really well, and we were working well together.” He added that, “earlier in the season, there were different plays that we were having trouble with, but during this last game we were able to successfully use them thanks to the time we’ve spent in practice working on them.” Indeed, goals were distributed across the roster, and a large portion of the team was able to contribute. Nevertheless, the score was 10-14 Aragon at the end of the match.

This game marked the halfway point of the season, and Watkins said that while, “the team would love for people to come and support all of their games, the upcoming games against Woodside (October 11–Home) and Hillsdale (October 18–Away) will be, “mando for attendance.”