By Emily Young and Fiona Belk

On April 23 the first round of the two round 2017 French elections narrowed the candidate pool down from eleven to two. Emmanuel Macron, a liberal centrist, is the candidate for En Marche!, a movement created by Macron in 2016 which he claims is a progressive movement and is neither “left nor right.” His opponent, Marine Le Pen, is the nationalist candidate for Front National, a far-right political party. During the primaries Macron took about 23 percent of the votes and Le Pen took about 21 percent. But with nine candidates now out of the running millions of French voters who lost their candidates could sway the election either way.

This election has shocked many French and European citizens. The Socialist party and Republican party have traditionally been the forerunners, and neither made the final round of elections, a first in French history. Controversy has also been sparked by the extreme differences between the two candidates. 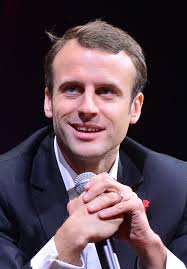 Macron is only 39 years old, making him the potentially the youngest French president, and is running on a platform that supports both left and right wing policies.

His domestic policies include unifying France’s pension system and increasing pay for teachers in poor and socially diverse areas. Putting around 50 billion euros into a public investment plan which would help create job-training programs, agriculture, and shift to renewable energy. Furthermore, to combat terror 10,000 more police officers would be hired and he would create a task force to defend against the Islamic State of Iraq and the Levant.

Macron’s foreign policies include strengthening European Union (EU) ties, a point where he and Le Pen directly oppose one another.

Macron has also denounced discrimination based on religion and stated that “no religion is a problem in France.” 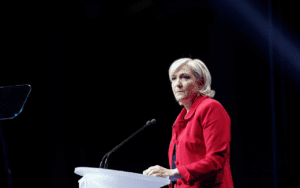 Le Pen, a right-wing candidate, is running on a platform almost opposite to Macron.

Le Pen has been criticized for her views on religion and has been called anti-Semitic, and Islamophobic. Policy-wise, Le Pen proposes closing “extremist” mosques and banning “ostentatious” religious symbols such as Muslim headscarfs and veils in public.

In the M-A community, French students voiced their opinions on the French election and how it affects them personally. 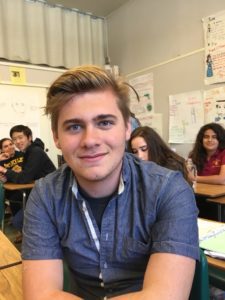 Junior Eliot Sauquet is a French citizen who moved to the United States six years ago. Although he has never lived in France he visits with his parents, who are both French citizens, approximately two months a year. Both of his parents voted in the first round of the French election, and will vote in the second round on May 7.

Sauquet has been following the French election and commented that the election has been “chaos, absolute chaos, in the same way that this election in America was absolute chaos… the rise of populism, Trump and Le Pen, and then you have moderates that are kind of hated by everyone, Clinton and I guess you can put Macron in that same sphere you know, he is young and energetic so people tend to like him. But he still represents old systems that we are trying to get away from.”

However, Sauquet commented, “[Macron] is the only option that I would say is not absolutely crazy and racist.”

Sauquet feels that the French elections are important, for him specifically as a French citizen, and for the future of France, and therefore has been following the election closely. He commented, “I don’t want to be associated with a country that can be seen as the most racist country in Europe. Because Le Pen kind of represents that, her party represents that. I mean her party is very diverse, but in that diversity you have white supremacists, you have anti-Semites, you have Neo-Nazis, you have a mix of everything. So her party pretty much represents all thats bad about France, which is our incredible sense of superiority, which is absolutely blown out of proportion.”

Sauquet believes that Le Pen and Macron are opposites. But regarding the main difference he sees between the two candidates, he commented, “their ideology on Europe. Le Pen wants to, after Brexit she wants a Frexit. Macron instead is willing to work around Europe and because he used to be a banker, so he knows how the economy kind of works. He is more willing to adapt around Europe and he does see Europe as a positive, which I do think it is. Where as Le Pen just wants to do the same thing Britain did, which so far is not working out very well. But never two without three, ‘jamais deux sans trois,’ as we say in France. Trump, Brexit… Le Pen?”

When commenting on his prediction Sauquet said, “its hard to say because Macron got 23-ish [percent] and she got 21 [percent] so they are very close. But Macron, please, please!” 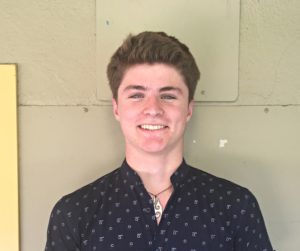 Hugo McMillan, a senior at M-A, is half-French, with his entire mother’s side of the family lives in France. Since he was born in the U.S., McMillan considers himself to be “pretty immersed in American culture,” to the point where he does not find many aspects of French culture in his daily life.

McMillan, along with his mother, both voted in the first round.

McMillan explained it was his first time voting for any election. He described the process as “simple”: voters waited in line at a French school for approximately 15 minutes, sign their name, grab slips of paper with the candidates’ names before picking one to fold and put in their envelope.

When asked about the differences between the two primary candidates, McMillan laughed, saying “There’s definitely a difference in the two platforms. They’re pretty… separated. For instance, Marine Le Pen wants to leave the EU, and Macron wants to stay in, which would be beneficial to like every country that’s in the EU, so… It could be bad.”

In his opinion, he believes Macron will win, “just because he’s ahead for now according to polls. But I don’t know, because they said the same thing for Hillary, so, you never know… I guess it’s like remaining civil for the most part though, unlike here. We’ll see, I guess. 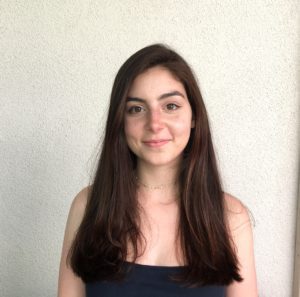 Leah Marcus, a junior at M-A, is also a French citizen who lived in Paris, France and Geneva, Switzerland for eight years before moving to California. Her parents, born and raised in France, own an apartment in Paris which they visit every year. Marcus says her mother is going to vote in the second round.

Like Sauquet, Marcus has been following the candidates in their campaigns, and also believes this election is “a complete replica of what happened here [in the U.S.] with Trump and Clinton.”

She explained why, saying the similarities include how close both candidates are to winning, the third party votes refusing to vote again, and people voting for the conservative candidate because “they want less taxes.”

Marcus expressed her dismay at how similar the elections seem to be: “I don’t understand how it can happen again. Look at us. Look at the United States. And now you’re going to do it again… you’re not learning from us.”

According to Marcus, the election would affect her and her entire family, since “they’re Jewish, and she’s clearly anti-Semitic. I don’t understand how she could win. She’s against anti-Muslim, she’s anti-Semitic, she’s anti-anything that’s not white. She says there’s all these terrorist attacks, so we need to get rid of all the Muslims in France, yet she says that France needs diversity. She’s also against education for children, like she wants to cut that off. That bothers me a lot.”

Marcus believes that if Le Pen wins the election, “France would just collapse.”