The M-A Black Student Union (BSU) is stronger than ever, hosting fun events in support of the community.

In the PAC Cafeteria on January 27, the M-A BSU held a “Night of Inspiration” to celebrate the contributions that Rev. Dr. Martin Luther King, Jr. has made to society. The event served to celebrate contemporary African-American culture and discuss hardships still faced by the community today with a variety of media showcased at the event including song, original poetry, dance, and a keynote speech by Adisa Banjoko of the Hip-Hop Chess Federation. 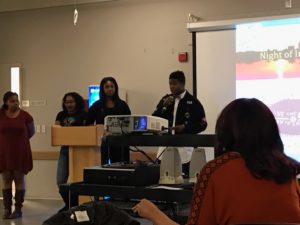 The first two acts of the night, poetry recitations by Merritt and Maya Jones respectively, offered empowering messages, before Hannah Roitman delivered a speech chronicling her discovery of the BSU and her struggle with identity due to her mixed heritage.

Following dinner service and a collection of short videos, Blake Sterling recited quotes from King before Jacob Virges and Mariah Noblin, a Sequoia student, ended the first act with more poetry, directed toward addressing violence and prejudice against the black community. 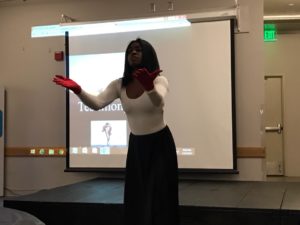 The second act kicked off with a “praise dance” by guest performer Unique Eley and a story from Fola Akinola recounting her personal hardships that she has overcome. Discussing a move to a home many hours away from school, Akinola had to “get up at five [a.m.] to leave by six to get [to M-A] each day.”

The keynote speaker of the night, Hip-Hop Chess Federation (HHCF) founder Adisa Banjoko, passionately delivered a speech summing up the sentiments of the night.

Giving backstory on the HHCF, Banjoko founded the organization after noticing that, in a juvenile detention center, “all racial and social boundaries … fell because of [chess].” Tying the principles of chess into hip hop and jiu-jitsu, the HHCF aims to help juvenile detainees, especially those of African-American descent, refocus on life. Advocating for community, education, and inspiration, Banjoko’s speech was captivating and resonated strongly with the entire audience, stating, “the only thing that keeps you from sinking is knowledge.” 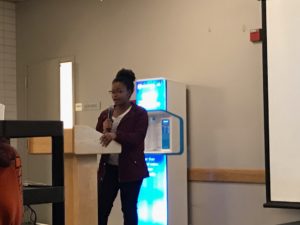 Following the keynote, Danae Brister delivered an opinion piece concerning the culture that rap music brings to society, the positive and the negative. Brister and Breona Hicks then performed a rendition of Lupe Fiasco’s 2011 hit “The Show Goes On,” with Hicks taking the verses and Brister singing the choruses as a finale. To end the event, M-A teacher Sherinda Bryant gave closing remarks and acknowledgments to members.

A common theme amongst many speeches, recitations, and performances was the need for interracial cooperation in tandem with pride in one’s own community and empowerment.

Richardson opined, “It went really well. Everyone did a great job and I’m very proud of all my BSU members and staff.”

To stay up to date with the BSU’s activities, check out its Facebook page here. Bryant can be contacted at [email protected].