Editors Note: This is a developing story and will be updated as more information becomes available.

On Saturday January 16, three local teenagers were transported to Stanford Hospital after sustaining significant injuries in a solo vehicle crash. According to eyewitness reports, an SUV was speeding down a Valparaiso hill near Altschul Avenue when the driver lost control and the vehicle flipped over.

According to a press release from the fire department, 911 was called at 12:59 PM and first responders arrived on the scene shortly after. They arrived on the scene to find a teenage girl thrown out of the car and two other boys stuck inside. One of the boys, Michael Enright, a sophomore at Menlo High School, unfortunately passed away Monday afternoon. One of the surviving two victims went to M-A. According to Principal Kennel, the student had just transferred and is “expected to recover fully.”

According to a statement from Menlo School, “Michael was a witty, interesting, and insightful student who had a unique perspective.” He was also a member of the JV Football team. A statement released by the family seemed to indicate that the other two minors involved in the crash would recover. According to the Menlo Park Police department, it is still unclear if the driver of the car was under the influence of controlled substances. This accident comes amid many other concerns about the dangers of Valparaiso Hill which has narrow turns and drivers who often ignore speed limit restrictions.

Students who need help processing these traumatic events can use this link or contact their guidance counselor. 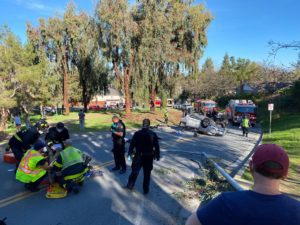