This Friday, the Performing Arts Center (PAC) filled with students and parents eager to witness M-A’s favorite student director, senior Lena Reibstein, debut five short films on the big screen in her second ever M-A screening. Like “47 Days,” the full-length feature film she premiered last April, these five films were entirely student-made, with Reibstein screenwriting, directing, and editing, and other students acting, writing the scores, and designing makeup.

Also like her screening last April, the suggested donation of five dollars was a fundraiser for charity, this time for victims of the California wildfires. Reibstein plans to continue this tradition into her filmmaking career and beyond, reflecting, “Even if the film isn’t… raising awareness for anything… that film should help something. So I think donating funds is a really great way to make films with meaning.” 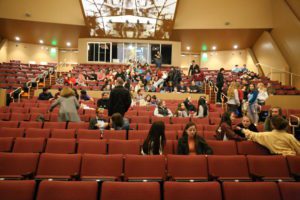 The PAC starts to fill with people.

Reibstein’s club, the American Cancer Society Club all helped organize the event, running the ticket booth and concession stand. Senior Leah Marcus designed the programs; Ethan Stoneham helped with the movie posters; Sarah Scandalios drew the signs for the event. “For this screening in particular, it’s a lot more about collaboration than last time,” Reibstein emphasized, “It’s from every walk of life and that’s what I aim to do in my future, and that’s why I like this one so much better than the last one.”

This spirit of collaboration and community was tangible as the PAC buzzed with warm anticipation prior to the films. Christmas lights lined the banisters and red hallways; excited chatter filled the air. When Reibstein took the stage to introduce her films, the crowd erupted in cheers and applause. Clearly moved, she thanked everyone for coming and all the people who made the films possible, bringing her producer, senior Jessica Galen, on stage for a special shoutout.

“You’ve been there with me thick and thin and you could not go unhonored tonight,” Reibstein said emphatically as she handed her a bouquet. 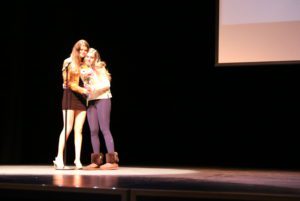 Galen, who also acted in a few of the films, helped Reibstein schedule filming times and gave advice during the editing process. “I’m kind of just like her little assistant,” Galen explained in a prior interview.

The night opened with a fun, short intro casting friend groups in high school as chemical groups in the periodic table. A true tribute to the M-A students that came to support Reibstein, the audience cheered as people recognized themselves and their friends, and the camera bounced from the C-wing, to the green, to the baseball field, and to Pride Hall.

The first film was “Pianoman,” which follows the story of a quarterback — played by M-A’s very own quarterback, senior Miles Conrad — who quits football to play the piano. Adored by everyone at school, his confidence is shattered when a formerly suicidal girl tells him the hard truth: he’s not that good. “The script that I’m most proud of is Pianoman,” Reibstein commented.

Next was “Advanced Placement,” a mockumentary in the style of “The Office” that satirizes the often high-strung academic environment of a Silicon Valley high school. Taking place in “Benlo Mark,” the film jumps between a series of ridiculous AP classes, such as AP Excuses, AP Napping, and AP Interpretive Dance. Reibstein herself appears in this comedy, playing the principal and various AP teachers. “It was so much fun to film because the whole thing is improvised,” Galen said.

“Terror and Beauty,” the third film, took a science-fiction spin as the protagonist wakes up after a wild night with the ability to see people’s worst fears written on their foreheads. 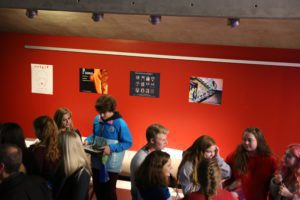 After a short intermission was the visually beautiful “Steps,” about a toxic friendship. The simple voiceover and moving original score by senior Shane Turner made it perhaps the most impactful film of the night. The screening finished with “Hustle,” a fast-paced, witty drama about a first date that goes awry after an attempted scam devolves into a crime scandal.

Ranging from twisted drama to experimental comedy, these five films were proof of Reibstein’s creative versatility and vision. They were proof, too, of her remarkable ability to bring all types of people together for that creative vision and give them the opportunity to experience filmmaking. Reibstein’s actors ranged from seasoned M-A theater stars to first time performers, but all succeeded under her kind guidance.

“I think if you are aggressively yourself and you’re aggressively like, ‘I am the film girl,’ you create this… little bubble of contacts,” Reibstein remarked.

Besides her magnetic creative energy, Reibstein’s thoughtfulness towards her actors and crew are another crucial aspect that makes being a part of her film world so appealing. Before the screening, Reibstein distributed goody bags to all her actors — even the extras without speaking roles — filled with candy that reminds her of their characters and a handwritten thank you note. “Care of your actors makes the bubble widen,” she added. 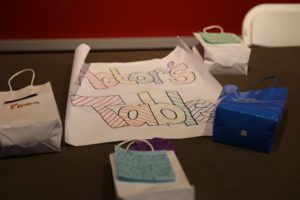 Lena Reibstein put together thank you gifts for all her actors.

“She is so caring about her cast and crew,” Galen affirmed, “It’s so cool to have a director that cares so much to get to know you and make sure you’re comfortable… She always cares to bring the cast together and really recognizes that you can’t get a good film without the cast being close.”

Reibstein’s dedication her craft has paid off in ways beyond M-A: this summer, she collaborated with AwesomenessTV on their web series “This Is Summer”; in October, she was an official selection for the All American High School Film Festival, an international competition, and her short film “Jealousy” was screened at the AMC Empire 25 theater in Times Square. Despite having now dabbled in a more elite world of film, Reibstein says there is nothing quite like screening at M-A. “[It’s] a special event that I can’t replicate anywhere else,” she explained, “It’s with everyone that I love, just doing what I love.”

Indeed, that love for Reibstein was palpable on Friday night. After the screening ended, the audience gave her a standing ovation. Once the clapping and cheers of “I love you Lena!” died down, she again thanked the audience, inviting anyone interested to reach out to work on a film with her.

“This is unreal, this is crazy, this is all my dreams come true,” she gushed afterwards. 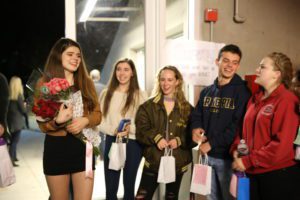 “I‘ve known Lena since I was five years old… and it’s so cool to see how every time she does something it gets bigger and bigger and better and better,” Galen commented, “Now you can see the little community… and it’s starting to grow and branch out.”

When she came out of the PAC, audience members formed a tunnel with their arms and cheered as she ran through. “Speech, speech, speech!” they chanted afterwards, as Reibstein beamed, teary-eyed, at all the people who came to support this little film girl and her dreams.

As for what’s next, Reibstein is in the midst of what she calls “project vomit,” a sort of frantic creative period where she works on several projects at once. “Winter break is gonna be a lot!” she laughed.

Look out for Reibstein’s next M-A screening in the spring semester. You can view her films and more information about Little Film Girl Studios here.