*The M-A student wished to remain anonymous because of fear of repercussion from being outed, so he is referred to as John.

When I sat down to write this article, I decided to scan through the journals I kept in middle school to remind myself of how I felt when I was coming to terms with my sexuality. I found this particularly poignant entry from when I was 11: “Then I realized, if I’m lesbian I can’t get married. I made that decision a while ago. I’m going to be alone, nobody can know.”

Reading this sentence now, as I write an article explicitly discussing my sexuality, as president of M-A’s Genders & Sexualities Alliance (GSA), after we have achieved marriage equality, it’s almost comically dramatic. My knee-jerk reaction to laugh at my sixth grade scribbles soon faded, however, as I recalled the profound turmoil, pain, and feelings of isolation I experienced during this period of my life. A month and a half after the above entry, I find one contemplating suicide. Themes of existentialism and self-hatred persist throughout my middle school years, blotting my documentation of daily life.

All this to say: I was lucky. I survived. I grew up to accept and love my identity, without seriously hurting myself or attempting suicide.

For many of my LGBT+ peers, this is not the case. According to a 2015 study by the Centers for Disease Control and Prevention (CDC) that surveyed over 15,000 American high school students, LGB youth are nearly three times as likely as their straight counterparts to seriously consider suicide, and more than four times as likely to actually attempt suicide. 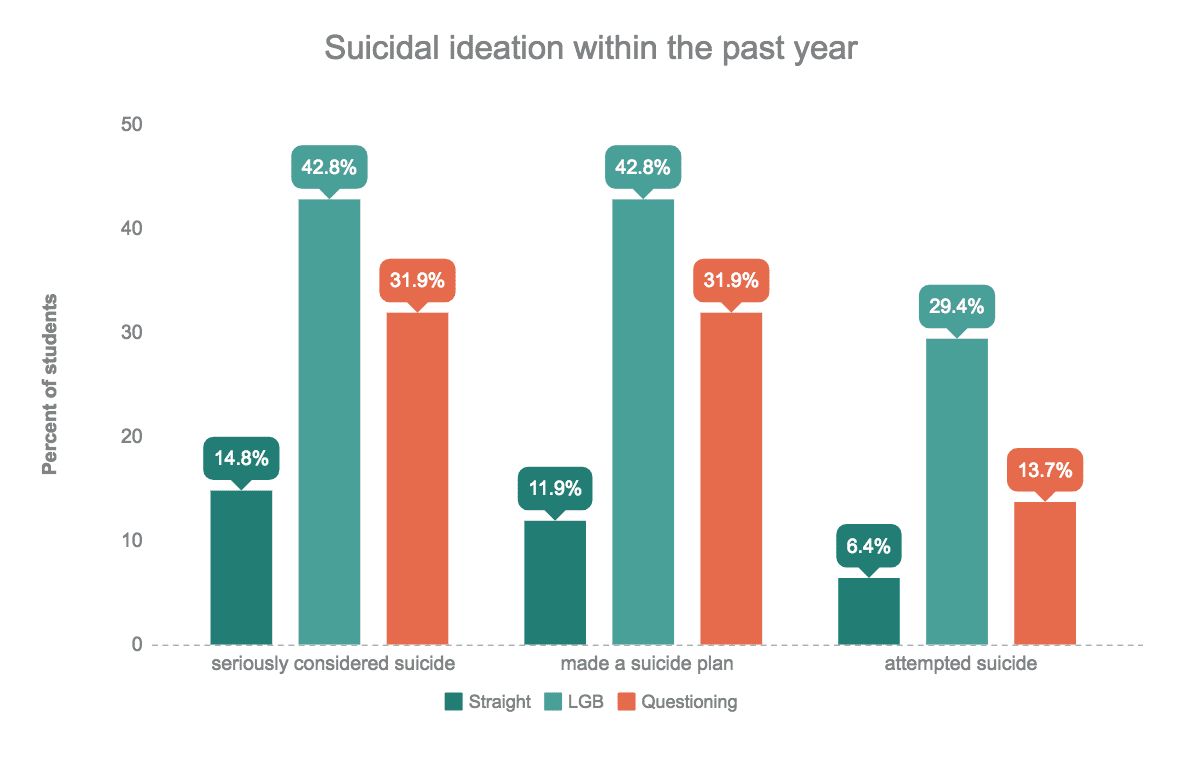 Data according to the CDC.

Although the same study did not collect data on transgender students, and there is little data on the mental health of transgender youth specifically, the 2015 U.S. Transgender Survey (USTS) found that among the over 27,000 transgender adults surveyed, 40 percent had attempted suicide in their lifetime, compared to the national rate of 4.6 percent. Of those who had attempted suicide, 73 percent reported that their first attempt was when they were 17 or younger.

Data according to USTS.

John*, an M-A student who is gay and struggles with depression and anxiety, realized this prevalence of mental health issues in the queer community after he attempted suicide and was hospitalized. “I ended up in an adolescent ward,” he explained, “I walked in and as I met everyone it occurred to me that almost everyone there was part of the LGBT community… I think of all the twenty or thirty people I met… maybe two or three of them were straight.”

“It opened my eyes, but it also made me sick,” he said.

One of the main contributors to the high levels of mental health issues among LGBT+ youth is feelings of isolation from family and peers, as it was for this student. “When I came out to my parents in freshman year of high school, that was when it really started to get bad because they didn’t take me seriously; they laughed in my face, they told me it was just a phase, that I needed to get over it, that I needed to stop coming up with things to beg for attention,” he detailed.

Lack of family support can not only exacerbate mental health issues, but prevent LGBT+ youth from receiving the help they need. Ben Liddie, a program coordinator at Outlet, a local organization that provides counseling and peer support groups for LGBT+ youth, noted that “if we need to seek mental health support and we’re not out at home or we don’t have supportive parents or families, often times there can be a lack of support… for being able to access those services.”

Miki Cristerna, the coordinator at the Student Support Center, which is one of the on-campus mental health resources available to students, affirmed that “we do have a lot of… younger students who often times are coming from an environment who is less supportive of who they are, so they are really in a spot of confusion.” 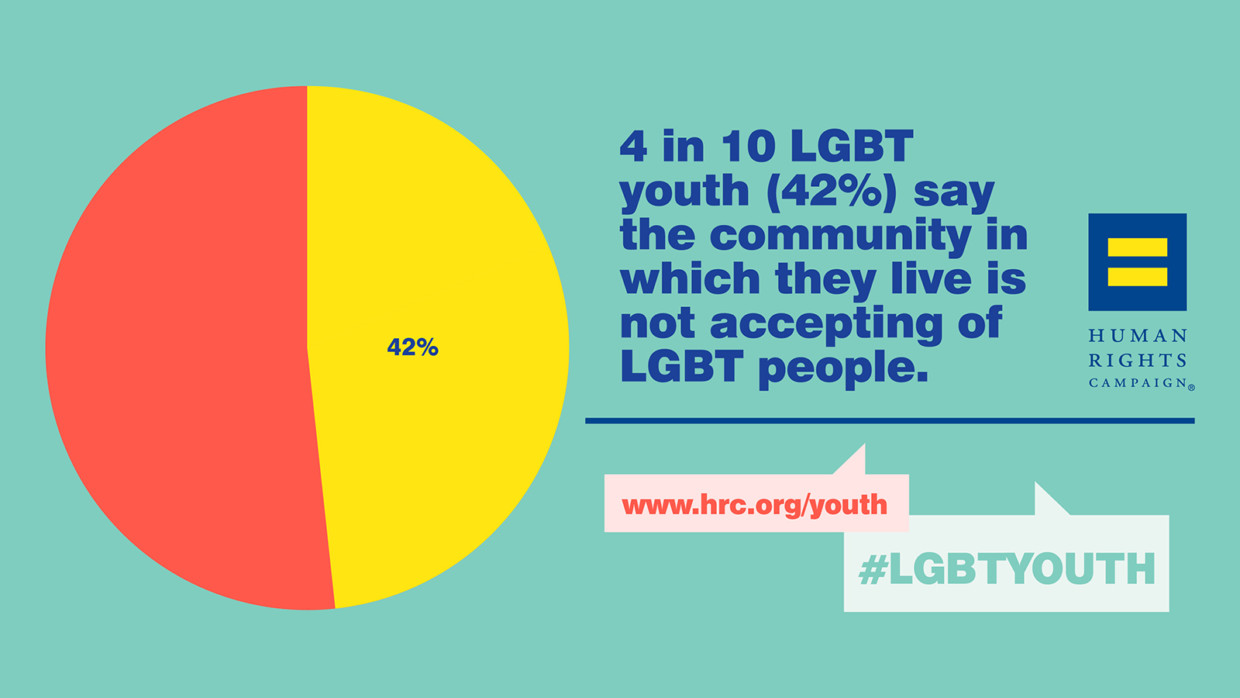 Being outed to unsupportive family members by a mental health care provider is also a major fear, because that can have dire consequences: 43 percent of homeless youth served by drop-in centers are LGBT+. That’s 43 percent.

Liddie also explained that “[one of] the biggest reason[s] that mental health statistics for LGBTQ youth are so devastating is because LGBTQ youth are experiencing incredible levels of bullying and harassment and ridicule at home and at school.”

Cristerna confirmed that “a lot of the referrals I get are when students feel as if other students are not accepting of them.”

According to the 2015 Gay Lesbian and Straight Education Network (GLSEN) National School Climate Survey, 57.6 percent of LGBT+ students felt unsafe because of their sexual orientation at school and 43.3 percent because of their gender expression. 85.2 percent reported verbal harassment and 34.7 percent physical harassment, all within the past school year; the reasons and frequencies are broken down in the figures below.

Fear of being outed and subsequent harassment directly affects the mental health of LGBT+ youth. John shared that “there’s a bunch of people… I no longer associate with who know about my sexual orientation… and that gives me anxiety.”

“There are some classes that I don’t like going to because of that,” he added.

Cristerna emphasized that peer acceptance is often one of the biggest factors in making queer students feel safe at school. “So often students are just more in the know about each other, they’re more in tune with each other,” she remarked, “[Students] are just getting to know who they are… and if they can hear from their peers that that [those identities are] okay, they’re going to grow up so much healthier.”

Beyond hostile school environments, the list of disheartening statistics for LGBT+ youth goes on. These same studies also found that LGBT+ youth experience higher levels of sexual violence and partner violence, have higher rates of drug use, and have worse dietary and exercise habits. This means we are at higher risk for substance abuse, eating disorders, and dropping out of school. 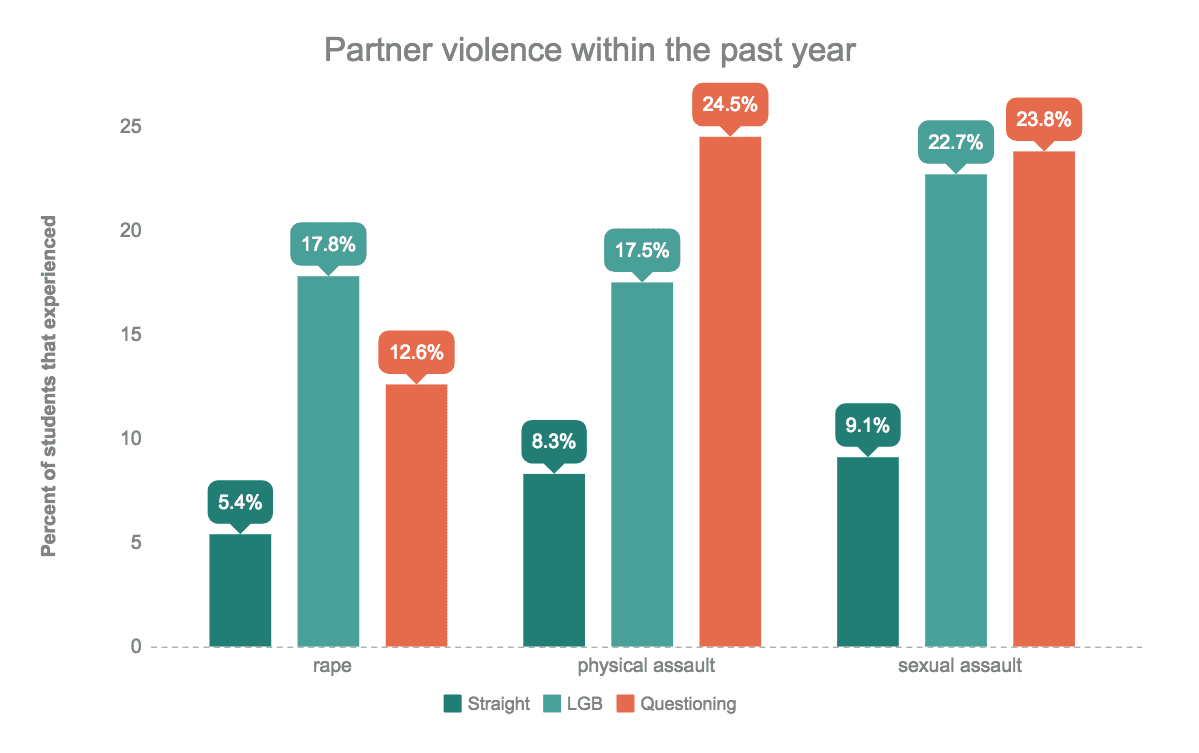 Data according to the CDC.

So what, then, can schools do to specifically address the needs of LGBT+ students? “Provide staff training, around LGBTQ identities and the way that those identities are linked to adverse health impacts,” Liddie emphasized.

M-A has had a few mandatory all staff presentations on appropriately responding to LGBT+ students over the past few years, but typically “as a reaction… as opposed to building it in as an ongoing educational process” said Vice Principal Karl Losekoot.

Liddie also recommended “positive representations of LGBTQ people in curriculum… having supportive staff on campus, specifically potentially staff who are in the [queer] community and out… just positive queer messaging in their classroom or posting LGBTQ resources.”

While M-A may be more successful on those fronts, in terms of specific on-campus mental health resources available for queer students, the school still falls short. Besides GSA, there are no resources specifically allocated for LGBT+ students. 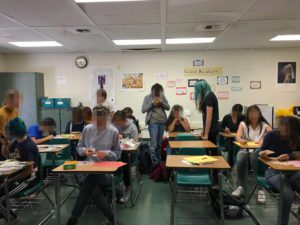 “I feel the mental health services here are sorely lacking whether or not they cater to straight people, but they definitely don’t have enough support for LGBT people,” John stated.

He has tried seeking support from both StarVista and the Student Support Center, but neither have been helpful. “They don’t seem to really know how to deal with me whenever I go there,” he explained, “They don’t really have anyone on their team who can relate to my experiences or what I’m saying.”

Cristerna acknowledged, “I think it would be really important and powerful to think about, ‘does there need to be just an LGBTQ focused group or support group?’”

Finding mental health care providers who understand the particular struggles of LGBT+ youth is a common difficulty for people in the queer community. “Many service providers… are not competent to be serving LGBTQ youth because they are not familiar with the language, they are not familiar with the associated risk factors, and often times can be quite insensitive or even straight up invalidating of people’s identities or experiences,” remarked Liddie.

They continued that “when a provider is not supportive and affirming of someone’s identity all of these risk factors that are very much at play in the situation are in some ways invisible to that person, and they are left unaddressed.”

Outlet is one of the few local organizations specifically geared towards providing adequate mental health services for LGBT+ youth. There is also the San Mateo County Pride Center in San Mateo and the LGBTQ Youth Space in San Jose. “The three of us are the main ones supporting youth on the Peninsula, but you’ll notice that that’s San Mateo, Redwood City, and San Jose, and there’s not very much in between,” Liddie remarked.

“That’s only three organizations for… queer youth in the area, and we’re a densely populated area, so you can imagine that there are a lot of people out there who need support but we can’t possibly reach them all with such limited resources.”

For John, any sort of LGBT+ specific support program or therapist is inaccessible because of his parents’ disapproval of his sexual orientation. “I was considering looking at Outlet but I realized that I would have to have approval from my parents to go there or else I would have to sneak out or something and it just wasn’t feasible,” he explained, “I don’t think I have really any resources, the best I can do is some of my queer friends, that’s all I got.”

The fact that queer people often only have each other for support is disheartening. Community is sacred and essential for LGBT+ people, but that’s because we oftentimes literally have nothing else. Growing up in a world that invalidates and rejects our identities has real, harmful effects on our health, safety, and self-image, even if we are not direct recipients of hatred or harassment. “When a community experiences trauma and violence based on their identity, you sort of lose some of your individual identity and adopt more of a communal identity, because you start to understand that other people are not necessarily seeing you as a dynamic individual, they’re seeing you more as a label,” Lidde explained, “And you carry that with you in ways where even if you haven’t experienced violence or homelessness or unemployment due to your identity, you could; it’s feeling that you could encounter that kind of violence, encounter a type of hate.”

Moreover, for those of us that may not be directly struggling with mental health issues, watching our friends experience this trauma is still incredibly painful and has a lasting impact. “It is really scary to understand that your peers in the community are really struggling, and to see statistics of identities that you share and to understand that you are a part of that statistic,” said Liddie.

“I think that that fear can make people more afraid of being rejected, more wary of trying to be out and have their identity affirmed by others. I think it can result in an overall feeling of disempowerment and helplessness. There is an incredible amount of sorrow that our community carries because of the legacy of harm that our community experiences, and that can be really hard to cope with.”

And ultimately, community is not enough. Friends are not enough to help someone overcome depression, or anxiety, or drug abuse. The fact that the student-run GSA is the only on-campus resource specifically for LGBT+ students is not enough.