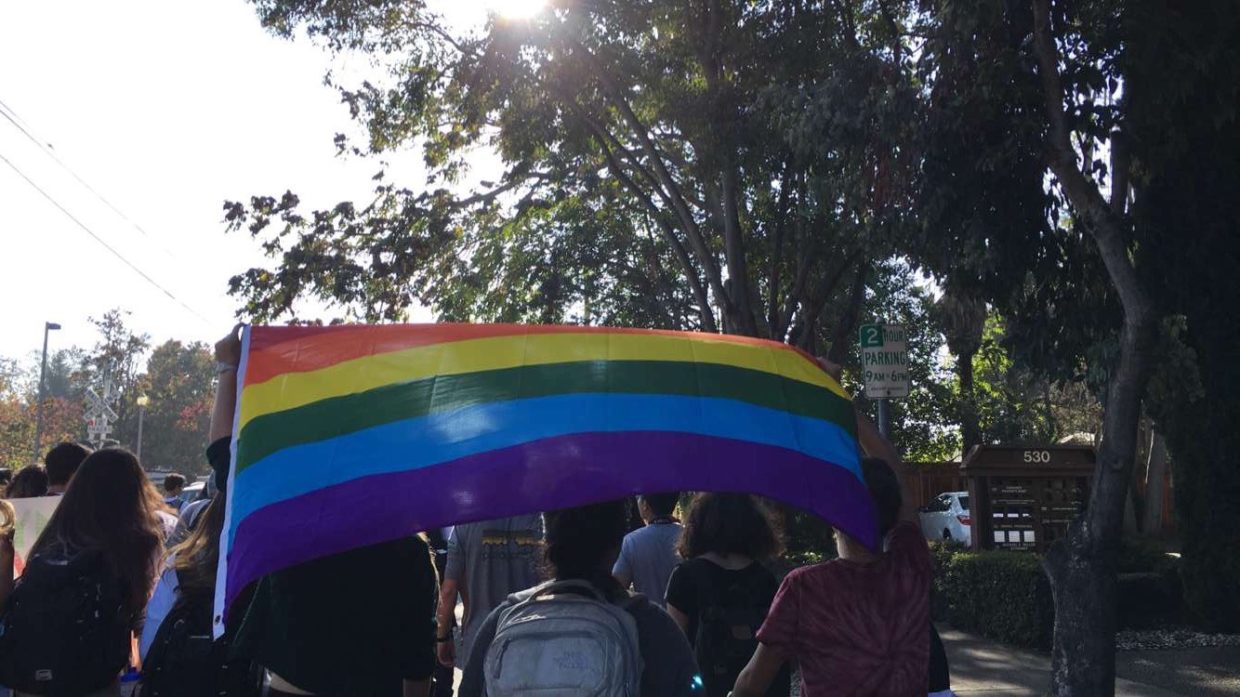 LGBTQ+A: How You Can Support the LGBTQ Community After the Election

Donald Trump’s election has left many communities across the nation feeling afraid and upset. One of the groups experiencing this uncertainty is the LGBTQ community.

Trump’s vice president, Mike Pence, has a history of campaigning for anti-LGBT legislation. In the past Pence supported conversion therapy, the Don’t Ask, Don’t Tell policy, and as governor of Indiana signed a “religious liberty” bill that allowed businesses to discriminate against LGBTQ customers, which drew so much outrage that he later softened it. He also strongly opposed marriage equality, which he suggested Trump would take a look at during his term.

Trump’s only reference to the struggle for LGBTQ rights in his campaign was through Islamophobic rhetoric. He promised to “do everything in [his] power to protect our LGBTQ citizens from the violence and oppression of a hateful foreign ideology,” yet his choice for vice president seems to insinuate that he will do little to protect our community from the oppression and violence we face from our own nation. In fact, some of Trump’s own stances perpetuate the oppression of the LGBTQ community in this country. Trump supports HB2, the North Carolina bill that would prevent transgender students from using bathrooms that align with their gender, as well as the First Amendment Defense Act, which would prevent the federal government from punishing people who act on their anti-LGBTQ beliefs.

Furthermore, many within the LGBTQ community have identities that intersect with other marginalized groups that Trump’s campaign has targeted. The LGBTQ community includes women, people of color, Muslims, and immigrants. His promise to deport millions of undocumented immigrants threatens the safety of those who are LGBTQ, who are at a higher risk for abuse in detention centers (especially in youth centers); his history of degrading behavior towards women and alleged sexual assault sets a precedent for sexual violence, which the LGBTQ community already generally experiences at higher rates than other demographics (particularly transgender people and bisexual women). The added forms of oppression that being LGBTQ entails mean that those in our community with other marginalized identities are at even greater risks now.

While the next four years are uncertain and scary, it is important to remember that there is always something you can do to help the LGBTQ community. We have compiled a list of organizations you can donate to or work with to protect the LGBTQ community, regardless of your age or experience.

El/La and LYRIC
El/La is a San Francisco-based organization that works to improve the quality of life of trans Latinas in the Bay Area, through health services and education (particularly HIV prevention), leadership development, and other programs to serve the essential needs of trans Latinas. El/La is sponsored by the Lavender Youth Recreation and Information Center (LYRIC), another San Francisco-based organization. LYRIC is a center for LGBTQ youth that provides safe spaces, development programs, and public education for San Francisco’s queer youth.

LYRIC hosts community events such as this Day of Healing.

Human Rights Campaign
The Human Rights Campaign is the largest national LGBTQ civil rights organization, campaigning for positive changes in America that will give queer people the same equal rights and protection as their cis counterparts. The HRC helped lead the campaign for the same-sex marriage Supreme Court case, as well as helping to ensure the passage of the Employee Non-Discrimination Act in 2013. Other notable achievements for the organization included the signing of the Matthew Shepard and James Byrd, Jr. Hate Crimes Prevention Act into law in 2009, and the repeal of the “Don’t Ask, Don’t Tell” policy the United States military had practiced.

To every #LGBTQ person across this nation feeling disheartened and questioning if you have a place in our country, know this: YOU DO. HRC and the majority of Americans stand with you. #HumanRightsCampaign #LGBT #Lesbian #Gay #Bisexual #Transgender #Queer #?️‍?

The National Coalition of Anti-Violence Programs
The National Coalition of Anti-Violence Programs (NCAVP) is a network of organizations that work to combat violence against LGBTQ and HIV-affected communities. Currently, the NCAVP is headquartered in New York City, within the local Anti-Violence Project, but has over 20 organizations nationwide. As the only organization in the country that works specifically to reduce anti-LGBT violence, supporting their cause is crucial in this time of vulnerability. The NCAVP researches and documents crimes against the LGBTQ community provides services and aid to victims and works to educate and organize the public to push for justice and equality.

Planned Parenthood
Many Planned Parenthoods provide hormone treatments for trans people, as well as resources and services for those needing a safe place to educate themselves on sexual and reproductive health. Planned Parenthood also offers general health care, STI testing, cancer screenings and abortion clinics, and offers patients with no access to birth control free prescriptions through donations and funding.

We’re not going anywhere — and we need your help to fight back: https://t.co/m1xnrgBoSE #WeWontGoBack pic.twitter.com/DALbst7r9v

Sylvia Rivera Law Project
The Sylvia Rivera Law Project (SRLP) is an organization that provides free legal services to trans, intersex, and gender non-conforming people, particularly those of color and those who are low-income. These services include helping these communities connect with health care, achieve legal immigrant status, or seek justice for imprisoned trans, intersex, and gender nonconforming people. The SRLP also fights for policy changes, provides educational programs, and connects the community with other social justice organizations.

Tonight we mailed out 17 packets of Know Your Rights materials to incarcerated TGNCI folks across the country and trained six new volunteers on prison correspondence!

The Trevor Project
The Trevor Project provides crisis intervention and suicide prevention services to the LGBTQ youth of America. They have a 24/7 hotline open for any teen who needs to talk, needs advice or needs help from someone professionally trained to be there for someone struggling with depression or suicidal thoughts. The organization also organizes many other volunteer events, such as PRIDE or community fundraising, and accepts aid through donations or volunteer hours.

Are you ready for #GivingTuesday? Join us in supporting LGBTQ+ youth through the holidays ? https://t.co/6uuGVPvJNz pic.twitter.com/FGPG6hI8kU