Lear Pong Shoots Toward the Finals

This year’s Lear Pong tournament is coming to an end as the final teams compete this coming week. The twenty participating teams dwindled down to the final five over the course of these past four weeks.

Lear Pong, an academic version of Beer Pong, has been a tradition in AP Literature teacher Lisa Otsuka’s class for 20 years. Two teams start with ten cups, and only two players per team can compete at a time. In each round, all players at the table throw a ping pong ball, and if a player makes the ball into a cup, the opponent must finish a quotation from Shakespeare’s play King Lear. Upon failure, a cup is removed, but if they complete the quote, the game continues without penalty. If both teams do not make a toss within a round, Otsuka gives a quotation that players race to name the speaker of. The team that does not answer first has a cup removed.

This year saw more sign-ups compared to past competitions, and the bracket is filled with creative, King Lear-related names. While Otsuka praised all of the team names, she pointed out “Soliloqueens” and “We Suffer from Goner Regan” as particularly creative. 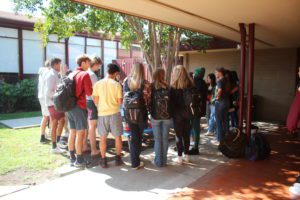 Students gather around the table to watch a Lear Pong match.

Activities like Lear Pong are one of the many ways Otsuka tries to “liven up” her classes. “I just feel like students can’t live by tests and essays alone,” she said. “I want people to have good memories associated with literature.”

The community that Lear Pong has made among the participating students is a compelling reason enough to participate, besides the fun of the game itself.

Participant Jackson Bryman said, “It’s definitely gotten people to shout out Shakespeare lines in the hallway to people and perhaps to other classes.” Shout out “O, reason not the need!”, and one may find themselves listening to overlapping responses of “our basest beggars are in the poorest thing superfluous.” 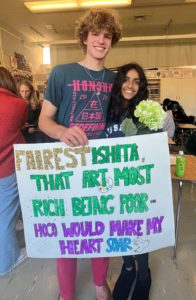 King Lear has certainly made an impact on some students. For example, senior Mark McGuire’s Homecoming proposal to Ishy Mishra referenced the King of France’s line, “Fairest Cordelia, that art most rich being poor,” a proclamation of love for her character rather than her dowry. McGuire and Mishra are both participants in Lear Pong.

When asked about the upcoming games, Otsuka said there is much anticipation for the coming week. She said, “the teams for the final four are very, very good. It’s gonna be a battle.”

To prepare, players are reading King Lear, throwing ping pong balls, and using a quote quizzing program which senior Hugo Ingelsson coded and shared for the benefit of all participants instead of keeping it as an advantage for his own team. 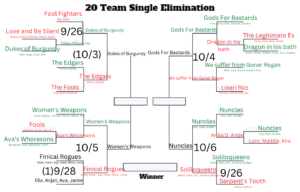 Bracket of the Lear Pong Tournament by Ishy Mishra

Ingelsson is on team Dukes of Burgundy, based on the character in King Lear that speaks briefly in Act One and never makes a reappearance thereafter. Ingelsson said, “It would have been funny if we got eliminated in round one, but then we didn’t.”

Their first game, against team Love and Be Silent, was their closest, concluding with one cup for each team before Evan Wong made the winning cup.

The Dukes of Burgundy are facing Women’s Weapons next, a team with the maximum six members, in the next round. 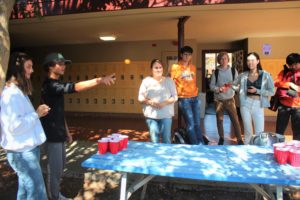 Aidan Wescott on Finical Rogues throws against Women’s Weapons in Round Three.

Going into the quarterfinals, Bryman on Women’s Weapons said the team will need to focus on their ping pong throwing. Despite being a team adept at the text of King Lear, Bryman said, “The unfortunate thing is that there is a minor amount of athleticism required; my figuring is that if we were up against a team that made every single cup, eventually we’d run across a quote that we couldn’t finish, and that would be detrimental to us.”

The second game next week is Nuncles against Gods for Bastards.

“Gods for Bastards” refers to Edmund’s soliloquy in Act One, in which he says “Now gods, stand up for bastards!” Their team name’s call for the gods’ support appears to have been answered, as they had a buy-in for round one, automatically advancing them into the next round.

Anna Patrick on Gods for Bastards said her team had not practiced much for their previous games, but plans to use Ingelsson’s program from now on. She said, “We’re going to have to practice with the quote quiz if we want to do well in the next game because I don’t anticipate us getting much farther without it.”

Though Patrick entered Lear Pong because many of her friends did, her games have not disappointed. She said, “I think the whole thing is really fun. I like that it gets so competitive and everyone comes to watch the games.”

Their opponents, the Nuncles, are a smaller team of three that also got a buy-in for round one. “Nuncle” is the what the Fool often calls King Lear, an adoring nickname that team member Mishra immediately took a liking to.

Also on the team is Kate Nelson, most familiar with Act 4. She said that the Nuncles prepare for games by using Quizlet and reviewing the text of King Lear, although their games have honed their ping pong throwing skills as well.

Nelson said that their greatest strength is their attitude; “We all work together and don’t get mad at each other when someone doesn’t get it right,” she said. “Only two of us can play at a time, so when one can’t say anything, but they know the answer, they never get angry.” 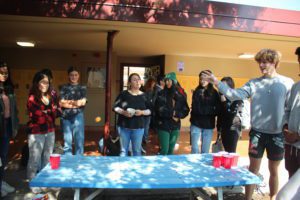 Mark McGuire on The Legitimate Es throws for the winning cup in the final game in the comeback bracket.

Added to the four finalist teams is a fifth contender, The Legitimate Es, that re-entered the tournament via a “completely legitimate pathway,” as Otsuka calls it, the first in Lear Pong’s history. This comeback bracket featured games with only four cups. Love and Be Silent fought an early deficit of one-to-four cups in the final game against The Legitimate Es before an extended one-to-one cup faceoff left The Legitimate Es as victors.

Teams of the final five will be eliminated one by one next week during lunch, with games hosted at the table outside Otsuka’s class, C-11. The last two teams get to decide whether the final is played on the Green, or at the table where it all started.