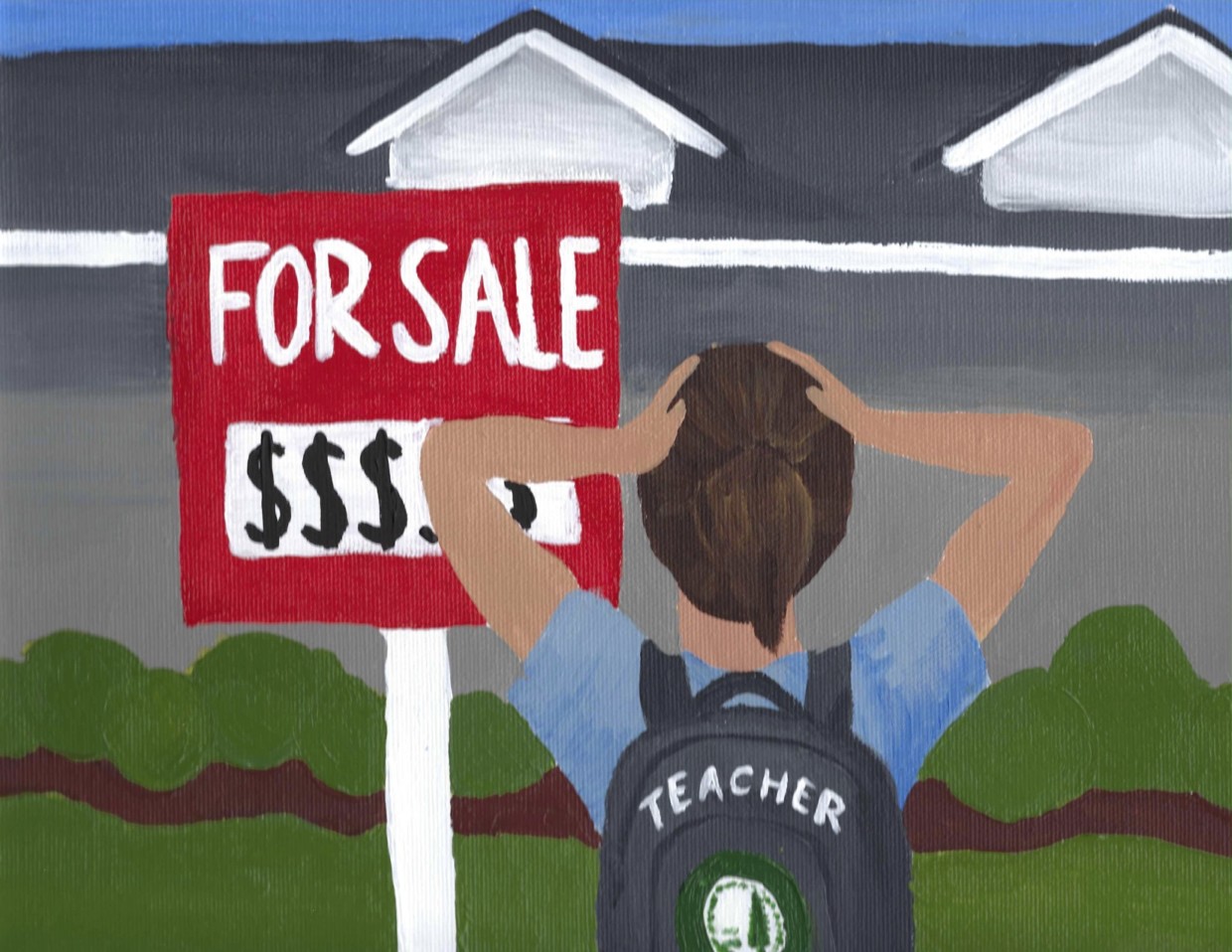 In June of this year, Landed, a company that helps educators purchase homes, announced a partnership with the Chan Zuckerberg Initiative (CZI), a foundation for “advancing human potential and promoting equal opportunity” created by Facebook founder and Menlo Park resident Mark Zuckerberg, and his wife Dr. Priscilla Chan.

CZI invested five million dollars in Landed, and the fund is specifically purposed for employees in the Ravenswood City, Redwood City, and Sequoia Union High School District (SUHSD). The first SUHSD educator closed on a house with Landed just over a week ago.

This partnership, and Landed itself, is a direct response to the housing crisis that has swept the Bay Area since the second boom of tech startups that began in the mid-2000s. The presence of lucrative tech giants like Google, Twitter, and Facebook, among hundreds of other smaller companies, has driven up housing costs across the Bay Area; according to the Demographia International Housing Affordability Survey, San Jose ranks first and San Francisco fourth in the top ten most expensive housing markets in the nation.

It follows, then, that home ownership in the Bay Area for low and middle-income families — the category under which a teacher’s salary falls — is a near impossible affair. In San Mateo County, the median house value is 1,192,200 dollars, meaning the typical 20 percent down payment for a mortgage comes out to around 238,000 dollars. With a teacher’s starting salary in SUHSD being around 65,000 dollars, it comes as no surprise then that most district teachers do not own homes; just over 38 percent rent and 29 percent share financial responsibility for their home with someone other than a spouse or domestic partner, according to a survey conducted by the SUHSD teacher’s union last spring.

Data according to Zillow.

“It creates a lack of stability [in the school], because you have teachers having to make the decision on a yearly basis if they can afford to stay in the area,” remarked Edith Salvatore, the president of the teacher’s union and a Spanish teacher at Sequoia High School.

Salvatore added that “it affects [teachers’] ability to be at school for the extras… the school play… the after school sporting events… and to provide some of the after school or before school help that they would like to.” 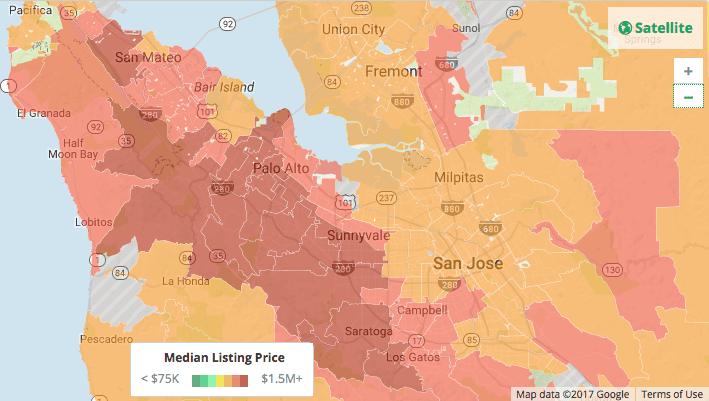 The median listing price of homes in the Peninsula. Credit: Trulia.

Carrie Moore, an English teacher at M-A, who is currently transitioning into her own apartment after living with a roommate, echoed this sentiment. Looking for just a one bedroom apartment, Moore’s only affordable options were over ten miles from M-A, in cities such as Milpitas, Fremont, or even Hayward. “It definitely makes me think about my availability for students,” she said, explaining that living far from school means she has to rely more on email, giving her less face time with her students.

“I’d want to be able to live closer to [East Palo Alto] or Menlo Park, to sort of see what student’s lives look like,” she added.

Local, affordable housing is not just an issue for renters like Moore. Discussing the same 2016 survey of union members, Salvatore detailed, “We thought that housing would primarily be an issue for our younger teachers, but we found that it was an issue for teachers across the board, whether they were new teachers or they were old pensioned teachers.”

For those teachers who fall somewhere between new and pensioned, this is the part where Landed comes in. Landed assists educators in making the down payment for a house, contributing up to half of the payment or 120,000 dollars, whichever comes first. Jesse Vaughan, a co-founder and head of investments at Landed, explained, “What Landed has enabled people to do is instead of needing 20 percent [for the down payment], they only need ten percent… so it cuts the time in half that they need to save.” 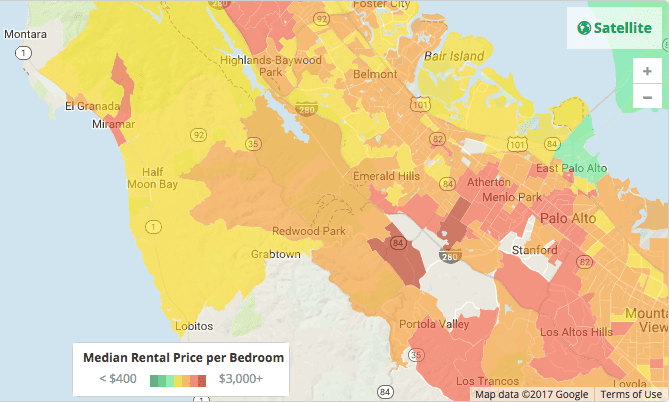 In SUHSD, rental prices range from 1000 to 3000 dollars per bedroom. Credit: Trulia.

“It can be the difference for people who’ve been able to put some money away but have watched the market continue to surpass them,” Salvatore commented.

One of such people is Daryl Solomon, an English teacher in the Computer Academy. She currently rents in Half Moon Bay, after the landlords for her house in Burlingame decided to sell. “I will never be able to save up enough money for a down payment. We make very good money here but regardless, we live paycheck to paycheck because the cost of living is so high,” she explained.

After a Landed information session for M-A teachers last Wednesday, Solomon agreed that they might be a good fit for her.

To fund these down payments, Landed partners with some sort of investment capital; in the case of SUHSD, the Chan Zuckerberg Initiative. “It’s nonprofit money that gets invested,” Vaughan detailed, “but we as Landed are a for-profit company.”

With the Zuckerberg fund, Landed hopes to reach 80 households.

These funds that Landed sets up will ideally be sustained indefinitely, since when the property is sold, the investor keeps 25 percent of the profits, plus their original investment, and recycles it back into the fund to use for other educators. However, since Landed has only existed for two years, the efficacy of this tactic has yet to be seen. Landed itself profits from referring recipients of their investment to real estate agents, who then pay Landed for the opportunity to work with customers. 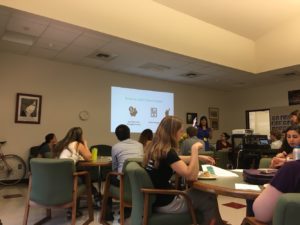 Jess Zhao, head of customer experience at Landed, explains the benefits of a 20 percent down payment.

On Friday, September 8, Fidel Mora, a math teacher at Sequoia, became the first SUHSD employee to benefit from a Landed investment after closing on a house in San Francisco. Previously, Mora and his wife, a teacher at Capuchino High School, had been renting in San Francisco and decided to stay there because of sentimental value.

“It feels both exhilarating and a little scary to have closed on a house in the Bay Area,” Mora commented in an email statement, “It is wonderful knowing that we have a home we love in a city we love.”

Although coming up with the ten percent down payment to match Landed’s investment was no easy feat — Mora and his wife had to use most of their savings and some of a retirement account — and homeownership is more expensive than renting because of the added costs of mortgage, insurance, and property taxes, Mora reflected, “Knowing that our monthly mortgage is building equity as opposed to paying rent to a landlord is also comforting and a great investment in the long run.”

There are several more SUHSD educators in the pipeline with Landed but who are still looking for homes. For others, however, Landed’s program will have no effect. Renters like Moore, for example, for whom home ownership is out of the question, still have little to no resources in finding local, affordable housing. “It’s pretty difficult to find housing within I would say a seven-mile radius of work,” Moore explained, “If you’re not living with a significant other, or if you’re not at the point where you’ve been teaching for so long that you get paid a little more, it can be really difficult.”

There are some governmental programs available for teachers looking for assistance in home ownership, such as the Extra Credit Teacher Home Purchase Program, as well as nonprofit ones, like the Housing Endowment and Regional Trust of San Mateo County, and Landed is aware of this. “We try and help people understand all of the other various options out there because there are so many and they all have their own quirks and requirements… Landed is not mutually exclusive to any of these programs,” Vaughan remarked.

When asked about the district’s plans for helping teachers find housing in the future, Assistant Superintendent of Administrative Services Enrique Navas responded, “We are in the exploration stage at this point.”

“We’re not a panacea; we don’t solve all problems for all people.” – Vaughan, Landed co-founder and head of investment

Landed acknowledges that tackling the Bay Area’s housing crisis will require a much more comprehensive solution. “We’re not a panacea; we don’t solve all problems for all people,” Vaughan said.

“We actually don’t solve most problems for most people, but there is this group of people that we can really help, and we have a solution for them, and that’s who we’re targeting.”

In a district of almost a thousand employees, where nearly 59 percent spend 30 to 50 percent of their monthly income on housing costs, the one that Landed has helped so far may not seem like much. But for Mora and his wife, it is. “Without Landed’s downpayment assistance, we probably would not have been able to purchase a home in [San Francisco],” said Mora.

“I only wish there were more local organizations like Landed helping people achieve their dream of purchasing a home.”

From a broader perspective, Vaughan explained, “We’ve found that helping someone stair-step from being a lifelong renter into owning the home they live in, it gives them stability to stay in the community for the long term. They’re assured how much they’re going to pay for the foreseeable future… and they can then commit to the community in a way that they couldn’t before. And that ultimately results in educational outcomes for each and every student that passes through their classroom for… their working career as an educator.”

“We want to be able to build a district where teachers come and stay for their whole careers,” Salvatore emphasized.

Home ownership is just one piece of the complex puzzle in achieving this goal, but this program with Landed will hopefully put the district on the right track for creating a community where educators and students can all thrive.