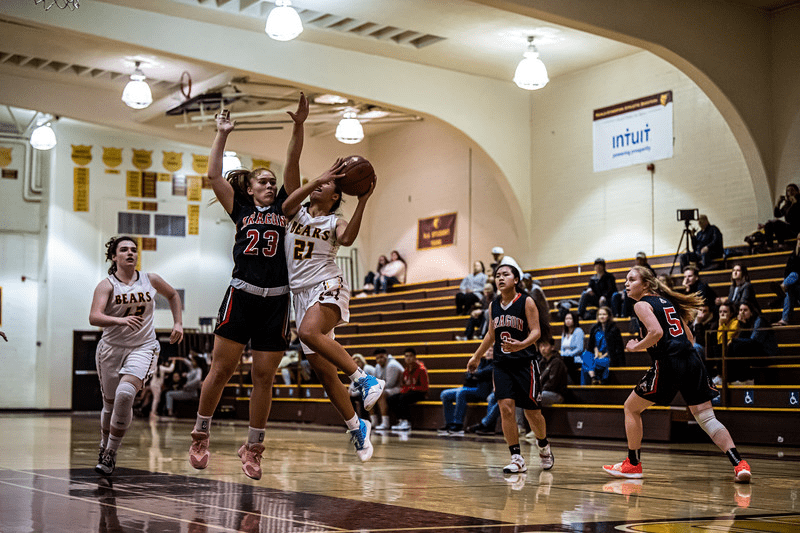 On ‘Quad’ nights, four M-A basketball teams — boys and girls junior varsity and varsity — play in Ayers Gym on Fridays after school. All teams are given the opportunity to play, but the levels of student attendance show a disparity between the boys and girls varsity games.

“The biggest difference is the student section. I mean, we have a lot of parent supporters and the occasional friends who come up to support the players. But you go into the boys basketball games, and the stands are filled up to the top. When you go to the girls games, there’s maybe a student or two,” said senior Sarah Davenport, a girls varsity player. “It’s pretty obvious,” acknowledged varsity girl, junior Rachel Benedict.

Athletic director Paul Snow agreed. “[The stands] look pretty packed for the boys games and for the girls not quite nearly there at all.”

Lin described that the support of student attendance and 6th Man–the spirit club associated with basketball– motivate him to perform during games. “For the boys we get a lot of support [from the student section]. At the Sequoia game there were so many people who were so spirited. Everyone was wearing togas. We were all having a really good time, and we had momentum coming in because of the crowd.” M-A won the game 61-45.

With lesser attendance, the girls games lack this enthusiasm. Davenport said, “I haven’t experienced the hype from the student section. It feels different not having them there, but it’s always quiet in our gym.” To Davenport, games feel “casual, like a scrimmage.”

Senior Mariah Grover, a captain of 6th Man, noticed that the attendance disparity has been pervasive throughout her time at M-A. “I have gone to many girls basketball games in my time at M-A, and student support, unfortunately, has never been as strong. When I was a freshman, the girls team was amazing and did better than the boys, but the student section still didn’t come.” That year, 2016-17, girls varsity finished ranked 22nd in the state.

The potential reasons for this disparity are varied. Benedict speculated, “I definitely think people care about the girls team. I think part of it might just be that they don’t really know when the girls games are, but the people that do show up are just as enthusiastic as those at the boys games.”

Nevertheless, on quad nights, all teams play, with the varsity boys always playing last. According to Grover, “the tradition [for the 6th Man] is to go to the last game of the night for every sport, and it just happens to be the boys games for basketball.” Davenport echoed these thoughts, saying, “I know that fans show up at the end of our game to support the varsity boys and it’s like, ‘you couldn’t have come like 15 minutes earlier to come watch our game and cheer us on?’”

Still, the problem of student spirit between girls and boys games of the same sport applies to other sports at M-A, too. Snow said, “I’m a [girls] soccer coach, and I’ve done soccer forever. We don’t have the draw that boys do.” He continued, “It’s a problem in our society, really; it’s the same even at professional levels.” In fact, The Sport Journal reported that media coverage for professional sports is vastly skewed by gender; only 1.6% of ESPN’s 2009 broadcasts involved women’s sports.

However, girls basketball is determined to achieve visibility. Benedict said that the team has made an Instagram account and has also asked the 6th Man club to advertise the girls game times. Additionally, in recent years the cheer team has cheered at both girls and boys varsity home games. Spirit clubs such as the 6th Man have also done more to highlight girls basketball this year. Grover said that as “the first 6th Man to have girl captains […] we have been trying to get more people to the girls games.”