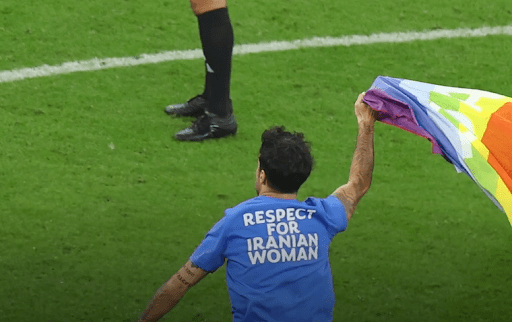 Kicking Controversies Around the World Cup

As the World Cup progresses, FIFA has been under scrutiny for their decision-making, starting with their choice to have Qatar host. Viewers worldwide took issue with the country’s human rights violations, especially those during its preparation for the tournament.

In Qatar, it is illegal to be gay, and those penalized for same-sex activity face up to seven years in prison. Captains of the soccer teams from England, the Netherlands, Belgium, Denmark, Germany, Switzerland, and Wales initially planned to wear rainbow “OneLove” armbands in symbolic protest against discrimination throughout the World Cup. However, after wearing them during qualifying games, FIFA banned them hours before the opening match of the tournament.

Fans and activists encouraged teams and viewers to boycott the event. Norway even held a vote to decide whether to participate; however, it proved irrelevant, given that they didn’t qualify. Protests erupted in Qatar before the tournament, and fans continue to voice their frustration as the games continue. 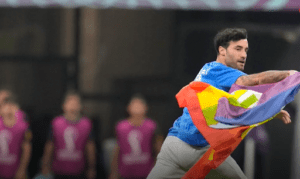 Man running across the field with “Respect for Iranian Women” flag.

In the Portugal vs. Uruguay game on November 28th, a protester interrupted the game by running onto the field with a rainbow flag and a shirt that read “RESPECT FOR IRANIAN WOMEN” and “SAVE UKRAINE.” Security guards quickly escorted him off.

Other human rights violations were uncovered leading up to the event. In preparation for the World Cup, migrant workers in Qatar built seven new stadiums, several hotels, and expanded the airport and highways. Until Qatar’s sponsorship system was discontinued in 2020, migrant workers were unable to leave the country and had no minimum wage. Workers were forced into strenuous labor under extreme heat. According to CNN, 400-500 migrant workers died in these  construction projects.

Additionally, the Taliban, a terrorist organization known for brutal violence against innocent civilians, helped in the tournament’s construction. According to The Telegraph, Qatar paid the Taliban millions of dollars for construction equipment. Many of the Taliban lived in Doha, the capital of Qatar, while they subcontracted heavy machinery. Some members leased between six and ten pieces of equipment, earning up to $12,000 each month per machine. Because this made the project extremely lucrative, many Taliban members continue to stay in Doha.

The tournament has also amplified Iranians’ dissidence as the women’s rights movement in Iran continues after Mahsa Amini’s death. In protest, Iranian players remained silent during the national anthem before their first game. However, they sang it in later games after the Iranian government allegedly threatened the player’s families with imprisonment and torture. The Iranian government even forced the U.S. team to remove a post from their instagram featuring an altered image of the Iranian flag on Instagram meant to support Iranian womens’ fight.

The World Cup captures the attention of millions of people around the world. Despite the controversies surrounding FIFA and Qatar, fans have not stopped watching. In fact, NBC reported that viewing increased 24% from the 2018 tournament in Russia.

One of the camera angles from a World Cup streaming platform.