On October 7th, leadership organized a “Powder Puff” football game for girls and non-binary people to raise awareness for breast cancer. One team of seniors battled a team of juniors, all coached by M-A football players. 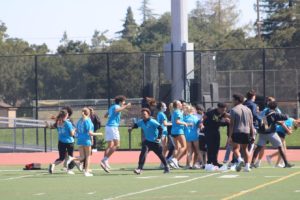 The junior team and coaches celebrate their victory. Photo by Maddie Molise.

Head coach of the juniors, Aaron Becker, had confidence in his team from the beginning. He said, “You may want to count us out but I don’t think you should. I’m feeling very confident,” just after their practice the weekend before the game. In the end, Becker was proved right. The juniors went against all odds and beat the seniors.

However, the victory didn’t come without a good fight. In the first play, the seniors came out with lots of energy, scoring a touchdown less than a minute into the game. A few minutes later, the juniors celebrated after scoring a touchdown to tie the score. After a stalemate of over five minutes, the seniors scored with 50 seconds remaining, and prepared to celebrate their victory.  The side lines were thrilled and cheered alongside the 12th Man.

However their celebration was premature: with only 18 seconds remaining, the juniors made a running play and sprinted past the defense into the end zone. The seniors were outraged since a junior player tripped Sabrina Redjaian during the play, who was defending the scoring player.

With so little time left, senior quarterback Gigi Edwards threw a long ball in hopes of getting a quick touchdown. Despite her efforts, the juniors intercepted it, and scored once again, as the time ran out, totaling the final score to 21-14, in their favor. 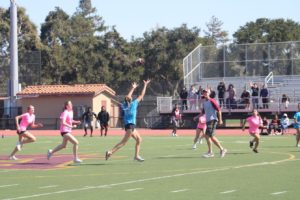 Juniors were ecstatic that their underdog team was able to win. Both teams worked hard in preparation, with two practices the weekends leading up to the game.

Senior and coach Jacob Wilcox was excited for the game and pleased with the performance of the players. He said, “I’m feeling great, we have some top players in our class. They’re all really athletic girls all around.”

There was positive energy throughout the game and some spirited competition only made it more fun for the viewers. Senior player Sydney Dougherty said, “It’s getting really hype, I’m really excited,” in the week leading up to it, echoing the feelings of her teammates. 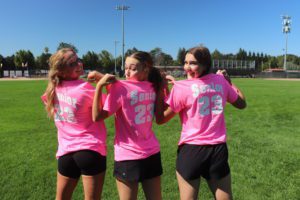 The seniors represented the game’s goal of raising awareness for breast cancer with spirited bright pink jerseys. Members of M-A’s 12th Man and Senior Jackson Picard also dressed in pink to show support, wearing a pink cape and clothing. Many other students dressed up to show their support, and the“pink-out” theme continued into the boys varsity football game later that night.

Students were also curious about the nature of the name “Powder Puff,” which originates from the “powderpuff” make-up tool that women would use to powder their faces when the games first started in the 1940s. Naming the games after a big fluffy brush, historically meant to indicate that women are inherently fragile and incapable of playing football, refutes an outdated stereotype.

Powder Puff football has been an M-A tradition for over 45 years and functions as a great vehicle to both spread breast cancer awareness and show M-A pride. 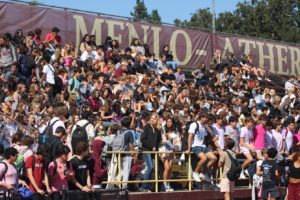