Editor’s Note: John McBlair, the Debate Coach, is also the advisor of this publication.

John McBlair, the Director of Debate for Menlo-Atherton for the past five years, announced last Friday that he will be stepping down from his position. In his time as head coach, the debate team amassed many awards at prestigious tournaments all while being ranked first in the nation consecutively for the last two years.

Last year, M-A had some of the highest ranking teams throughout the year. Their success carried into the season this year, where they continued to hold the number one ranking in the U.S and had 3 of the top 5 highly ranked teams. Despite the season being cut short due to the spread of COVID-19, the team won six tournaments. Three of their wins came at the biggest tournaments of the year, the Cal Parli Invitational at UC Berkeley, the Dempsey Cronin Invitational at Santa Clara University, and the Campolindo High School Invitational, where no final round at any of the three tournaments was even necessary because it was two M-A teams competing against each other. 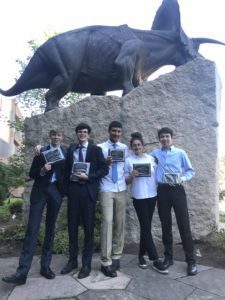 Although McBlair led M-A to plenty of success, the team will be led by new head coach Brier Buchalter. Buchalter has been coaching the debate team with McBlair as assistant coach for the past two years and is very experienced in debate. Ainsley Gentile, a junior on the Debate team, said, “we’ve known Coach Brier for a long time, and he has a lot of experience with the M-A team. He is very helpful with ideas when debate topics come up and is a very fast thinker.”

The decision to leave the debate team was not an easy one for McBlair, as he truly has a passion for debate, “coaching debate here has probably been as satisfying as anything I’ve ever done in my professional life,” McBlair said. However, the workload being the debate coach simply became too much to balance with his two other classes, Journalism and AP Language. According to McBlair, “I’ve known since the first tournament five years ago that I couldn’t do these hours for more than a certain number of years. The tournaments go all day, most of the weekend, and there’s about twenty of them. It was thrilling to compete in them, but eventually it crowds out other things that are important too.”

McBlair will continue to teach the Debate and Critical Thinking class, but it will be completely separate from the debate team this year. The debate team will be transitioning away from a class and an after school club to only an after school club. As for the class, McBlair will focus much more on critical thinking skills, public policy and current events, styles of debate, and philosophy.