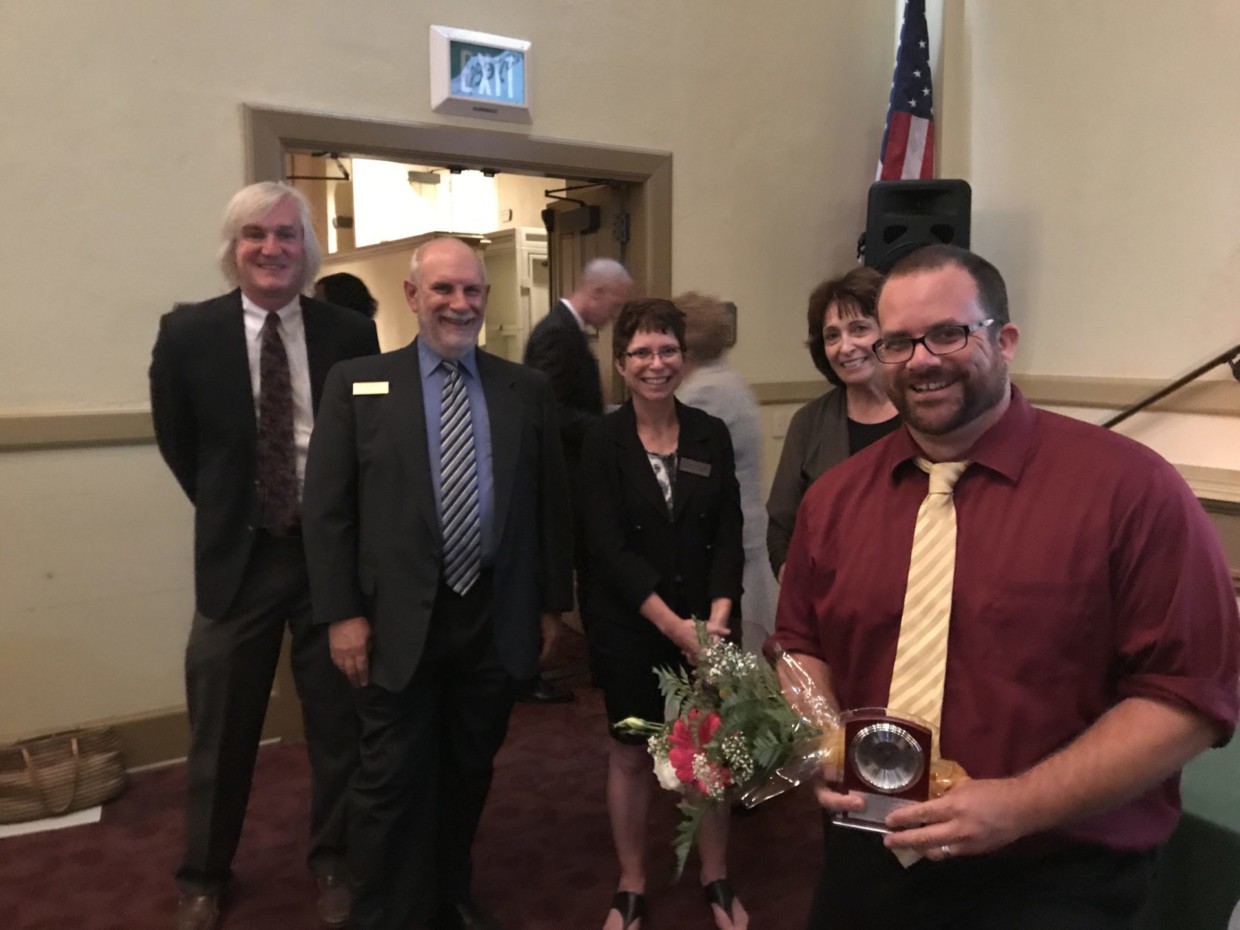 Recently, M-A’s video production teacher John Giambruno was honored with the Teacher of the District award for the Sequoia Union High School District, regarding the 2016-2017 school year. One teacher is selected each academic year for outstanding work at their respective high school and given this award as a token of appreciation for being outstanding in their profession.

It is not often that M-A welcomes a teacher into its community who not only teaches well but who inspires students to push themselves beyond the limits of what they know and hope to accomplish. Giambruno has been one such teacher for over a decade and continues to keep his students excited and engaged with each coming year. Giambruno, or “Mr. G,” teaches Video Production to students of all grades at M-A and enjoys watching students discover the nuances of creating videos. From M-A Today to the student film festival, the Canned Food Drive to sports events, students have created countless captivating videos under Giambruno’s guidance.

As a student, Giambruno would never have expected to end up teaching video production. His favorite subject was physics, and his original plan was to become a science writer, because, he added, “My three best teachers were my freshman English teacher, my senior English teacher, and my senior physics teacher.”

Even throughout college, he did not expect to become a teacher. Giambruno planned to become an archaeologist when he began his college studies, but explained, “then I found out that teachers make more than archaeologists. Both my parents were teachers, and I always knew in the back of my head that I could be a teacher. I started subbing when the dot-com bust happened, I really liked teaching and I was subbing at Ralston, and I decided to go for my credential in English.” 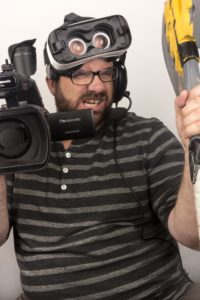 Giambruno transitioned to teaching and was a student teacher at M-A for a few years. He explained, “I student taught under Ms. Angelone, Ms. Kane, and Ms. Calamares, who’s now the vice principal at Sequoia. They wanted to hire me, but they couldn’t hire me, so I first spent a semester teaching at Middle College and then I came back to M-A.”

Giambruno admits that video production was never a field he expected to dive into. However, soon after being hired, he was chosen as the video production teacher, and recalled, “My minor was in writing, and the writing had a screenplay focus, and then the one job I had before teaching was in marketing and we worked for a company that did online video. So I kind of had some experience, and then after my first year, they got a grant to make a video production class that got six computers, four cameras, and that was it, and no one to teach it.”

After more than a decade of teaching such a unique class, Giambruno has countless memories of moments that have shown the best parts of being a teacher. He added that it is impossible to choose a favorite teaching moment because there have been so many. One such moment occurred in his very first year of teaching. Giambruno remembered, “I had a kid who was on the football team, and it was the day after finals had been graded, and he was nervous because of eligibility, and he truly earned a B minus. He was jumping for joy for a B minus, and I was like, okay, it felt good because he really worked hard and I was helping him. To see it pay off was really great, so, a football player jumping around for a B minus, I can still see him right now.”
Other highlights of Giambruno’s job are the annual student film festival at M-A, and the first place finish won by an Academy student for his 360 boxing video. The student was not doing well academically, and he asked Giambruno if he could take the camera to the boxing ring he worked at, and Giambruno explained, “I thought, ‘Oh, sweet, you boxing in virtual reality, that’ll be awesome!’ Totally misjudged him, totally preconceived — he instructs boxing, so there’s these little seven-year-olds. It was adorable, it was like a shoe-in for a winner. I was really proud of him, and I was really happy to see him in a new light.” 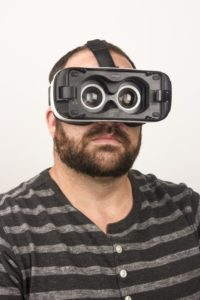 After years of teaching students about the nuances of video production, Giambruno has learned how to appreciate every camera angle, every detail that goes into creating a polished video. In fact, every year, his favorite teaching moment is the day that he teaches about different shots used in video making. He added, “I teach different shots and angles, and also why you use these different shots and angles. Every year, it never fails, I get a student coming back after we do the lesson and after they do a little practice, they come back upset because I’ve ruined movies for them. They’re like, happily angry because all they can focus on are the camera angles.”

Perhaps the best indicator of any great teacher is the opinions formed by their students. Junior Evelyn Calhoon took video production with Mr. G last year, and added, “Before taking his class I was just a photographer. He was able to teach me film, story telling and all the tools involved with that. I enjoyed it because all the tools I learned I have applied to my own life. His guidance has evolved my passion for filmmaking.”

Calhoon also recognizes Mr. G’s passion for teaching and noted that it comes through in class. She also believes the most interesting thing about him is that his journey in education was not clear cut, and “He went to so many schools. It was refreshing to see that life isn’t just a straight path. It involves many unexpected turns.”

Mr. G has not only taught students like Calhoon about filmmaking but has shown them that, while following their passions might not follow an obvious path, it is worth it to find one’s calling. 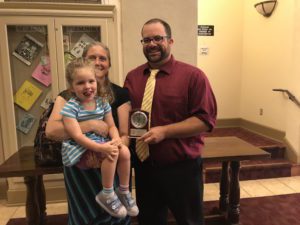 John Giambruno at the awards ceremony with his family.

Giambruno is the kind of teacher that the M-A community is lucky to have, a rare teacher who can reach out to students and inspire them to create something unique and moving while enjoying the learning process. There is no doubt in the minds of his students, or across the M-A campus, that he wholeheartedly deserves recognition as Teacher of the Year for the Sequoia Union High School District 2016-2017 school year.