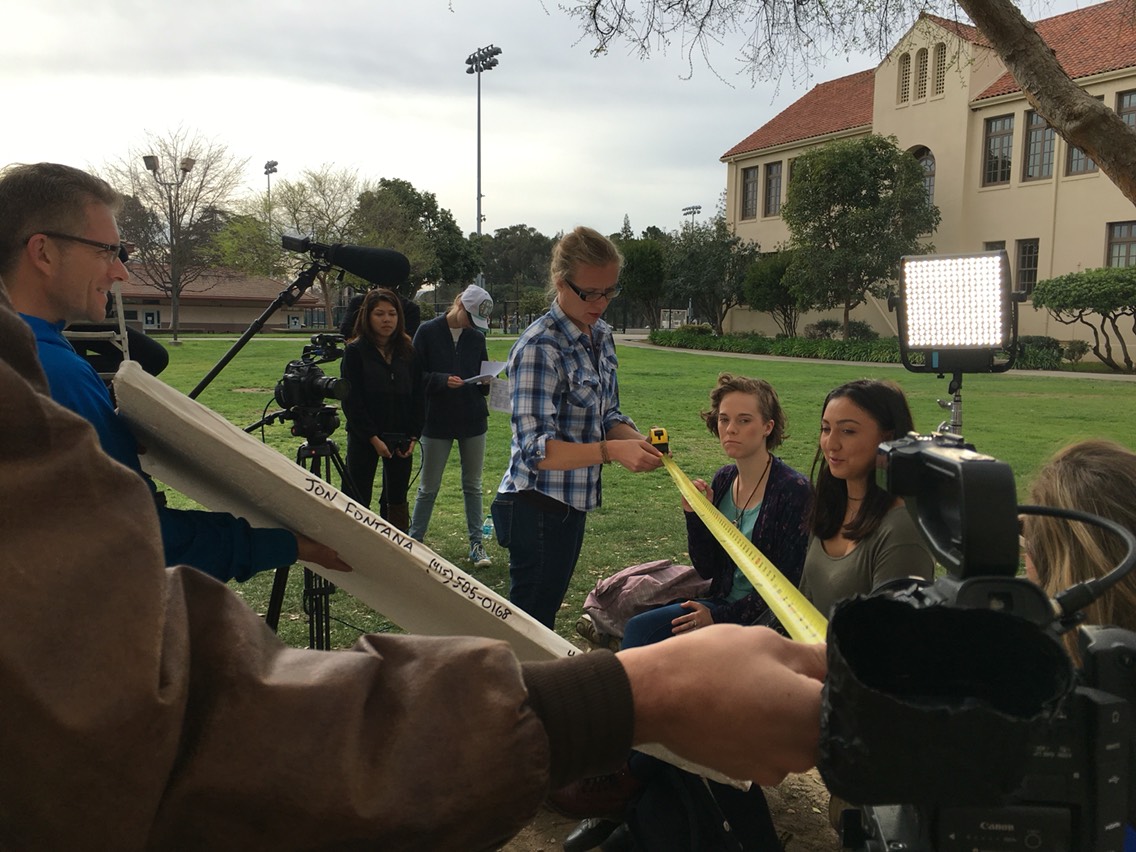 At the Media Arts Center at Palo Alto High School (PALY), a small group of passionate students from around the Bay Area attends the James Franco film workshop every two to four weeks for the entire school year. To be accepted, students must first answer some basic application questions, then write a couple of short personal essay questions about themselves, and lastly send in a one minute video which they recently made.

Lena Reibstein, a junior at M-A, decided to apply for the workshop at the last minute after a friend of hers suggested she sign up. The day before, she and fellow junior Tori Rarick filmed until midnight, creating her one-minute long video she titled “Through Their Eyes.”

Reibstein found out she had been accepted into the program during a rehearsal for the school play “You Can’t Take It With You.” She said when she found out, she felt extremely happy and incredibly lucky that she was able to have this opportunity. 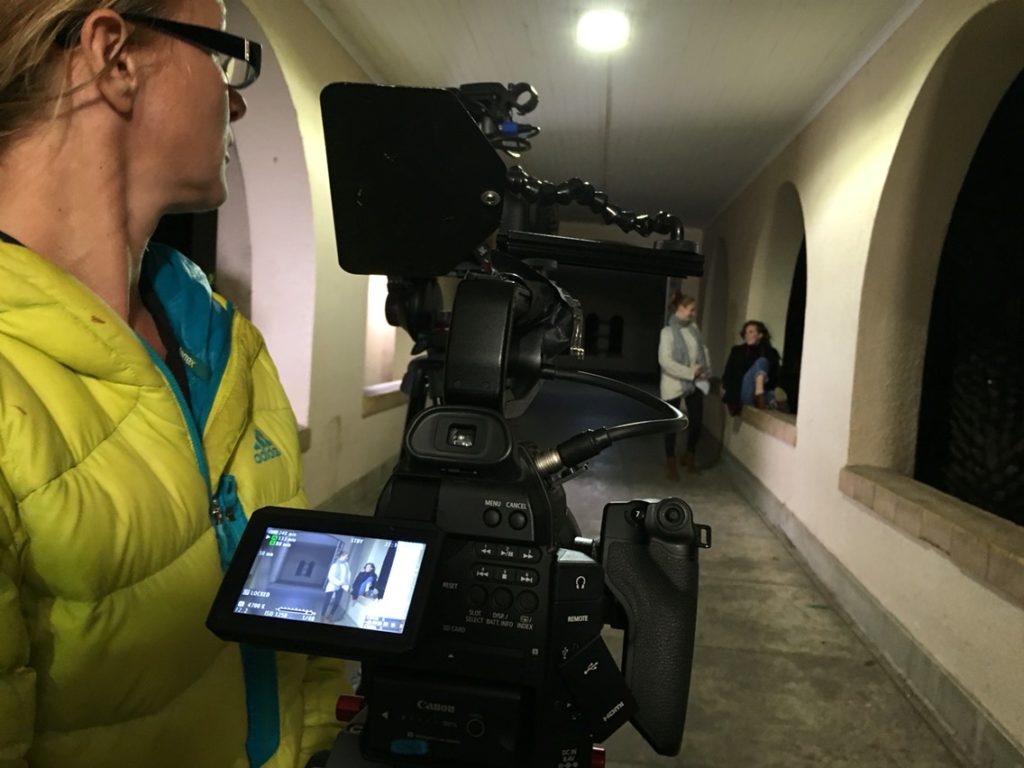 Students work on their film project.

According to Reibstein, film has always been present throughout her life. “I can’t actually pinpoint the moment I got into film — it’s just something I’ve done unconsciously my entire life. I am and have always been an actress, but I began to realize that I loved film just as much — even more — than I did acting in my sophomore year of high school.”

She decided to turn the casual short films she was always making with friends into a serious project. During her sophomore year, she filmed a short documentary about different religions’ perspectives on what happens after death. After entering the video in the 2016 M-A film festival, Reibstein realized that movie making “could be as beautiful in production as it was in concept.” 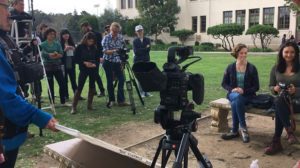 Reibstein hopes she has a future in film-making and is interested in all parts of the movie-making process: “The one idea that leads to the brainstorming, which is poured into a script, made a reality in production, and perfected in editing.”

Out of approximately 300 high schoolers who applied, about 25-30 students make up the class this year from all grades. The schools they attend are very diverse, most coming from Palo Alto or Los Altos schools. According to Reibstein, the program accepted only one other person from the Sequoia Union High School District.

The classroom itself is set up like a miniature theater, with a small stage in the back and a wooden floor in the front for an audience. There have only been two classes so far, which have focused on the pre-production aspect of film, primarily the script. The students read it out before editing it and discussed alterations and character development. Reibstein believes the conversation is mainly geared toward the students, who are responsible for many decisions, which she finds both “terrifying and amazingly refreshing.”

According to Reibstein, the class is very professional, and although it can be intimidating, she sees it as good practice for getting situated in the “real world of film.” 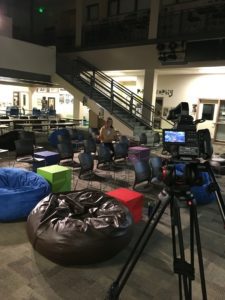 A student sits in the Media Arts Center.

Reibstein finds Franco very laid back and funny, and also very opinionated, which she feels makes for good feedback. As far as she can tell, he is “not afraid to talk openly about anything and [is] fun to work with.” Reibstein noticed that his mother, the scriptwriter, who led the last class on October 31, is “just as open and approachable.”

She feels inspired working with the Franco family and people as passionate and competitive as herself. She explained, “It is what you make it; you have to speak out and stay with the class or else you won’t get what you want out of it, which can be really hard sometimes. You are definitely not catered to, and I really like that. It provoked a lot of self-realization and increased motivation for me.”

Misia Poray, who graduated from Gunn High School in 2016, took the workshop last year, the first year it was available.

Poray, who, like Reibstein, submitted a video the day of the deadline, also had a similar reaction to being accepted. A few mornings after sending in her application through email, she also felt extreme excitement when finding out she had been accepted into the brand new program. 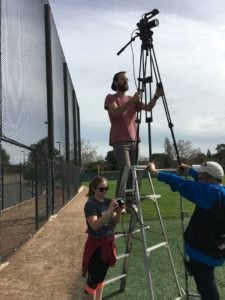 Poray works with the film crew.

Poray was always interested in filmmaking because of her parents, who work in film. Her love for it actually started in sixth grade, when her mother challenged her to rewrite a classic story she loved since Poray had been begging her to remake it into a modern film.

Since she was 10 years old, Poray has been making short films. She is particularly interested in writing and producing. 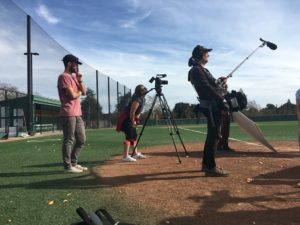 Poray prepares to film a scene.

The class last year consisted of 40 people, mainly from Gunn High School and PALY. A typical day consisted of the students discussing and moving forward onto the next steps in making a film. Poray found it very fun and interactive and said there were always opportunities to become more involved.

In her experience, Poray did not find it intimidating or distracting having a celebrity as a teacher. She reported that Franco led some of the classes when he was available, but otherwise his producer Iris led the class.

Poray acknowledged that she did not have any expectations coming into the workshop since it was the first one. Reflecting upon the class, she thoroughly believes it was a good learning experience which solidified her interest in filmmaking as a career.

Now, she is working on a couple short films and is working toward her future in filmmaking.