On August 19th, Administrative Vice-Principal Nick Muys gave a PSA on M-A Today about bike security: “If you bring a bike to school, lock it. And when I say lock it, I mean with a serious, heavy U-lock. Locks like this [cable locks] are sadly not up to the job most of the time.”

The high rate of bike theft at M-A, “maybe once every two weeks,” prompted Muys to make this announcement. As the overseer of transportation at M-A, he estimates around 95% of bike thieves are non-students, so a key reason why this rate is so high is M-A’s exposure to the streets.

Muys says, “We’re not surrounded by castle walls, so to speak, so there are bikes 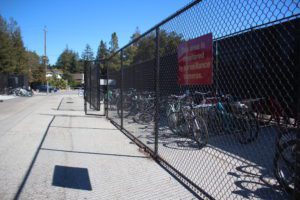 that are more vulnerable if they’re kind of exposed.” Outsiders can walk along the perimeter looking for bikes to steal, which Muys likened to “window shopping.”

Freshman Kayla Suria echoes this caution, keeping her bike inside the bike cage. “I haven’t really seen any bikes get stolen here, but even then, other people can easily get into the school and take it.”

English teacher James Nelson, in charge of M-A on the Move, fixes bikes and teaches students to do the same. He agrees with Muys that students should use U-locks, adding that ideally, a student uses a combination of both a U-lock through the frame and a cable through the wheels. Nelson says that bike thieves “usually either have tools to cut cables or they have tools to cut rigid locks like U-locks, but they seldom have both.”

Although cameras are always monitoring the bike racks around campus, it’s not easy to catch a thief in the act. Since recovery of a bike to its owner is rare, “prevention is what we’ve been pushing as much as possible,” Muys says.

The foremost thing students can do, Muys says, is lock their bike. “Nine times out of ten, thefts are because the bike wasn’t locked at all, which is remarkably frequent. People are in a rush, so they get to school and they just throw the bike against the rack and hope for the best.”

Even though the bike cages are locked for most of the day, there is a window of opportunity when they are unlocked and students are starting to leave. 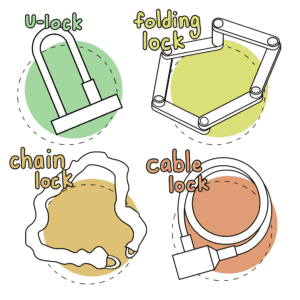 Although locking a bike in and of itself reduces the chances of theft, the type of lock also plays a factor. There are flexible types, such as chain locks and cable locks, and rigid types, such as U-locks and folding locks.

Muys says, “The U-locks are good, and the chain locks are actually pretty good too; the ones that are like the kryptonite locks with the large links are also enough to dissuade most thieves. It’s really the cable locks; if we could reduce the number of cable locks on campus, that would be very helpful.” He later adds that folding locks are “really robust” and similar to U-locks.

Understandably, students with more expensive bikes should use a better lock. In a more typical scenario, Nelson advises to look at the locks on other bikes in the area so yours is not the easiest one to steal; as long as it’s not the worst.

Nelson says, “There is no locking system that will prevent someone indefinitely from stealing a bike. The goal behind a locking system is that you want to make it take as long as possible.” 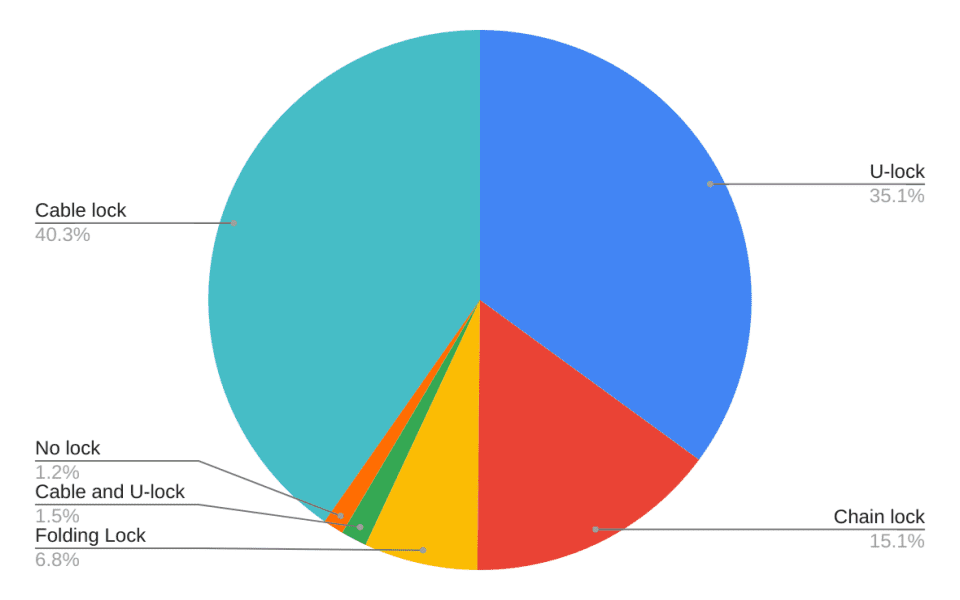 After recording the location, lock type, and parts locked of bikes around M-A campus, data shows that only 1.5% of bikes were using both a cable and a U-lock and the majority of students (40.3%) use cable locks. However, a close 35.1% of students are using U-locks as advised.

Senior Emmett Avrach, who had his bike stolen freshman year, has since changed his lock from a cable to a U-lock. Avrach says, “So far it’s never been stolen, even though I’ve had better bikes.” He recommends using a U-lock for everyone, since it’s harder to break. With an angle grinder, “you need multiple minutes to cut it, but with the cable lock, you can cut it in a second with a silent wire cutter.” Angle grinders are fast and portable power tools–Nelson comparing them to lightsabers–but are loud, attracting attention if people are nearby.

Nelson adds that Seatylocks, although pricier, are a good option to look at. Seatylocks are folding locks with the bike seat attached, functioning as both the seat and the locking system. Because the lock includes the seat, thieves will overlook bikes that appear to be missing a seat, or they’re left with a seatless bike should they choose to cut through the lock. 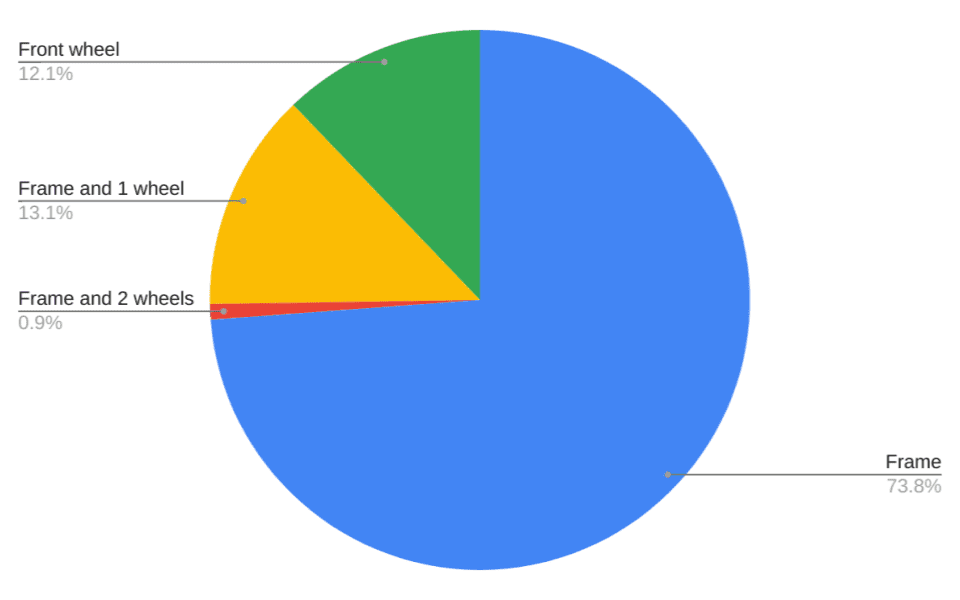 How you lock your bike is also important; almost three-fourths of bikers only lock their frame, leaving the wheels vulnerable to be stolen. However, this is not as much of an issue at M-A, since Muys says that stolen bike reports usually involve the entire bike, rather than parts.

Suria is part of the 13.1% of students securing the frame and wheel, which she does using a chain lock. She suggests others to “definitely get a lock that can go through your wheel and frame so it’s much safer to have a bike.”

Although rigid locks are more difficult to use on the frame and a wheel than flexible locks, it can be done if a bike is correctly aligned with the bike rack. Nelson says, “The bike rack is supposed to be coming up towards the frame of the bike so your wheel actually goes past the bike rack. Then you can put the lock through your front wheel, through the bike rack, through the frame, and lock it all together.”

Besides using a good locking system, Nelson says that locking your bike in a visible area also deters thieves. 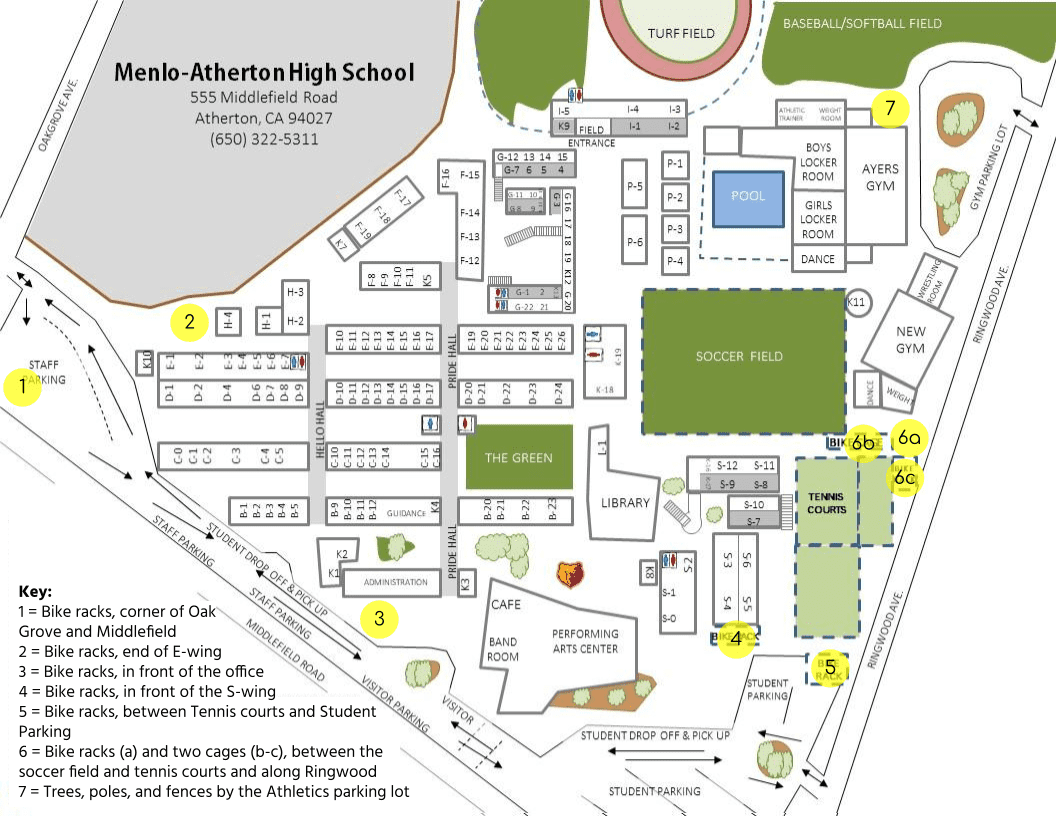 Students typically place their bike in the place that is most convenient for arriving or leaving M-A, but these popular areas, such as the bike cages along Middlefield, the racks in front of the S-Wing and tennis courts, and the racks at the corner of Middlefield and Oak Grove, are along the perimeter of the campus. Locations like the racks in front of the office are farther from the perimeter and more visible to students and faculty.

A third method to deter stealing is to have an ugly bike, affectionately called a beater bike. Muys points to his own bike, a Dutch grandma bike called Omafiet (which directly translates to “grandmother-bike”), as an example. He said, “It’s all rusty and beaten up, and I actually don’t lock it to anything, I just have a lock that keeps the wheel from turning. It has not been stolen and I think it’s because it’s its own kind of anti-theft device.”

So what do you do when you show up at the bike racks only to find your bike missing?

If you need a bike, you can visit Nelson at G-2 and fill out a M-A on the Move contract for a bike. Meanwhile, you can try to recover your bike by filing a report to the school and the police.

“There’s a lost property form that we have students fill out,” Muys says. “Students describe the bike and its location, and that helps us to find it on the cameras. Then we look for the actual moment that it was stolen and we grab that footage and send it along to Atherton PD.

Reporting to the school and reporting to the police are two different steps, so make sure to do both. “It’s not a crime unless there’s a victim,” Muys says, “and to fully have a victim, in this case, you actually have to report it.”

“If you don’t find your bike within the next day or so, it’s probably long gone,” says Muys.

If a bike is stolen for its parts, it might find its way back to M-A. “I get a lot of stolen bikes donated,” Nelson says, often recovered from the police or donated after one or two parts have been stripped. However, bikes are often defaced or missing parts, now beyond recognition. “So now you can’t say, ‘oh, that’s my Diamondback.’ Or, ‘that’s my Trek.’ Because now it’s just spray painted in weird colors.”

This also means that many bikes added to the M-A on the Move program need fixing first, which requires help and resources. Nelson says, “I need more tires. I need tubes. I need wheels. I definitely need some more support, but if students want to learn how to fix bikes, I’m always looking for more people.”

Nelson has noticed an increase in bike requests, a difficult combination with this year’s smaller grant that funds the program.